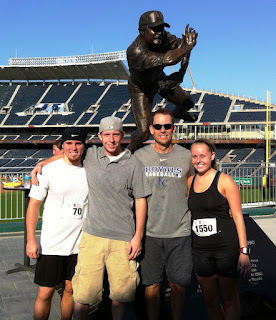 All in all it was a great day at "The K" ... Kauffman Stadium, the home of the MIGHTY Kansas City Royals!  I got to combine my three favorite loves in life ... family, running, and FRIGGIN' BASEBALL!!! I ran the 3rd Annual Kansas City Royals 5K, benefiting Royals Charities, with my daughter Madison and her boyfriend, Nate.  My son, Gage also came out the stadium and watched his sister and ol' man run ... which was AWESOME to have him there!  Michael didn't run with us ... she had a previously scheduled 10K at the Northface Endurance Challenge with Dean Karnazes in downtown KC.  She also did a great job and PR'd, which you can read about here ... Slowly Tri-ing!

There were four of us running on Sunday in two different races, and I had hoped to write a race wrap-up about how all of us PR'd ... but I can't!  Three of us PR'd, but "someone" kinda let the group down ... that someone was me!  I was the only one who didn't.  Gotta get faster to keep up with these peeps I guess!

It was a beautiful day, but a little warm for really fast performances.  And as a result, all of the times were a little slower than last year.  It was about 75 degrees with 75% humidity at the beginning of the race.  And about 2 miles into the run, the humidity kicked in and slowed everyone down a little.  I don't remember seeing any of the top runners stop and walk in a 5K before today, but I passed three different guys at the end who had stopped to walk.  Believe me, I wanted to join them a couple of times, but I just slowed my pace a little and kept going.

I had originally planned to run with Michael at the Northface race, but when Madi & Nate decided to run the Royals 5K a few weeks ago ... I changed my plans to run with them.  My thinking was that Madi is going to be getting married and having babies in the next few years.  As her life gets a lot more hectic, I don't know how many opportunities I'll have to run with her.  I really missed running with Michael but she understood, and we all had a great time at our own races.  Plus, I had ran in the two previous Royals 5K's, so I was excited to keep the tradition going, and try to set my 5K PR ... more on that later.

The Kansas City Royals 5K is a smaller race but is gaining in popularity and size every year.  As far as the course goes, its pretty uneventful other than the finish.  The Kansas City Royals and Kansas City Chiefs Stadiums are located right next to each other and share the same parking lot.  The race starts out in front of Kauffman Stadium, then circles Arrowhead Stadium, home of the Kansas City Chiefs.  After that, it's pretty plain until the finish.  The course basically takes runners around the back of Kauffman Stadium, and then loops the parking lot. But if you're a baseball nut like me, the finish is AWESOME ... because runners finish on the field of Kauffman Stadium!!!  The last tenth of a mile is a loop around the warning track in the Royals outfield, and the finish line is at third base.  I'm like a kid when it comes to actually being on the floor of the stadium ... it's awesome!
﻿
﻿The organization of the race is getting better too.  But probably the best thing about the race, other than finishing on the field, is the post-race food.  They have everything!  Hot dogs, nachos, and beer ... and of course the traditional post-race food as well.  This is always the best post-race buffet of any race I run.  Pretty cool!

Madi's Awesome Run!
As far as the running goes ... like I said, everyone set a PR except for this guy!  It was Madi's second 5K ever, and she topped her previous 5K PR by more than 2 minutes at 27:58 ... a 9:02/mile!!!  Gage and I got to watch her from the stands as she circled the outfield and she was FLYING!!! She was passing people right & left with a great final kick to the finish line.   I can't believe how well she is running ... this kid is awesome!  Gage even said, "It's pretty awesome to watch your little sister kick butt like that!"  You're awesome Mad, we love you!

Nate's Big Day!
It was her boyfriend Nate's first 5K ever and he also ran a great race.  The only problem was, his timing chip in his bib didn't register ... (mine didn't either - more on that later.)  He finished a few minutes ahead of Madison, but at this point we don't have any idea on an exact time.  He was a little bummed, which is understandable.  They must have been having trouble with some of the chips, because two out of our three didn't register.  Nate's fairly new to running and ran a great race too!  Plus, he's a pretty cool dude ... "I guess!" I have a "verrrrrrrrry strong suspicion he's gonna be around for a while" ... and we couldn't be happier!

Big Talk ... No Results!
Which brings me to my race ... big fat flippin' fail!  I won my age group, which was cool ... but I REALLY wanted to PR, and I didn't!  I had written posts over the past few weeks about how some of my training times had been around 5:30/mile - and I honestly thought I was gonna shatter my 6:03/mile 5K PR pace, but I just didn't have it in me on Sunday.

Basically, it was very confusing.  My legs felt fresh and light.  My energy level was great.  My race plan was solid.  And the whole time I was running, I never felt like I was pushing to hard or anything ... but I just couldn't get my speed down to where it needed to be???  A couple of times I felt like I had really kicked it in and that my time was finally down around a 5:30ish pace ... but when I glanced at my Garmin - it was only 6:00ish???  It was humid, but I've put up much faster times in much "muggier" conditions.  So I dunno???

After the race, we waited around at the awards ceremony.  I was 13th overall so I thought I might have placed in my age group.  But when they announced the winners ... no Jim.  Huh, that was odd ... because I had passed the winner in my age group at about 2.5 so I know I finished before him.  Plus his time was 19:15 ... and I my Garmin read faster than that.  My initial thought was that I had been DQ'd because I wore headphones.

After the ceremony, I talked to the official results guy and asked him if I had been DQ'd - he said no, they wouldn't have disqualified me for that.  We went over to the Ultramax timing guys who were awesome.  I told them what had happened and they pulled out a tape of all the finishers and found me crossing at about 19:09. They were very apologetic and said for some reason my chip didn't read?  They actually went and found the medal lady and asked her to give me a first place medal - awesome!  Problem, they had already given away the first place medal that read Male 40-44, and the only first place medal they had left was one that read Male 80 & Over!!!   AWESOME!!!  That was hilarious!!!  So basically, I was the fastest 80 year old on Sunday ... which I'll take!

There is no way not PR'ing could have ruined the day on Sunday.  I was with my two awesome kids and my future son-in-law (more on that later) ... and nothing could have put a damper on that.  Of course, I'm always a little bummed when I try to run my best and don't ... but the day was much more than that!   I was with the people I love and watching them have a great time and do well was a million times more important than an "over-competitive" old man not accomplishing his goal.  They ran great, but more importantly, we were together and it was awesome! It was a beautiful day that we'll never forget!
... be great today!
Posted by Jim ... 50after40 at 5:09 AM