The Legend of Ol' Blue

Do you have a favorite running shirt?  I do.  It's my plain blue Nike technical tee.  I love it.  Yeah, I've had some good times and some pretty decent running success in Ol' Blue!

But the other day, The Unexpected Runner left this comment on a post ...
"... plus, we got to see a pic of you running in something OTHER than that blue shirt! Please tell me you own more than one of them ;)"

When Michael read this comment, it was like the funniest thing she had ever heard.  She laughed and said, "That's hilarious, someone called you out on wearing that stupid shirt all the time!"

Well laugh if you will everyone, but the fair amount of success Ol' Blue and I have shared together on the race course is just the beginning.  We've actually been through quite a bit together.

I first met Ol' Blue when I returned home from the war in 1945.  He was an out of work running shirt, and I was just a young runner looking for a garment I could depend on.  We entered a lifetime partnership right then and there.

In 1952 on a hunting expedition in Guam, we were attacked by a pack of wild dogs.  Admittedly, I had been warned not to wear Ol' Blue because wild dogs can only see one color ... you guessed it BLUE!  But like a stubborn fool I insisted.  We were sitting ducks out there in that field.  But Blue and I fought off those dogs like warriors that day.  Not a one of those mangy mutts were left standing!  And though a little tattered, Ol' Blue and I walked away with not only our skin ... but also respect and admiration for each other!

Round about '71, Blue got mixed up in the whole Watergate scandal.  He had always had political aspirations and thought being a "staffer" on Nixon's crew was the ticket to the Oval Office himself.  When I couldn't convince him that no one would ever elect a running shirt as President, he did his own thing for a while.  I'm not sure how deep he was involved, but after the smoke cleared, we joined back up - Blue was a lot wiser from the experience.  To this day he doesn't talk much about it  ... but I've learned to just leave it alone.

From 1983-85, Blue and I decided we would try the pop scene.  You should have seen us - two young crazy guys out on the town.  Me with my Jerry-Curl, and Blue in his parachute pants.  Can you imagine ... a running shirt and parachute pants!  They just didn't work together. But you know what ... that crazy S.O.B. pulled it off!  And don't think the ladies didn't notice.  There was this halter top in 'Frisco that still has a piece of Ol' Blue's heart! 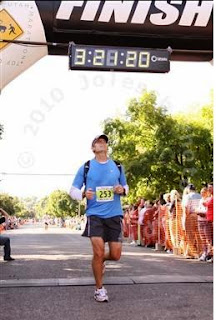 Like everyone, I suppose, Ol' Blue does have his demons. This is kinda personal, but I think never knowing his mother, the HV5 Champion Ski Jacket ... or his father, the Power Glide XL Warm Up Pants, has really taken it's toll.  Sometimes he'll get all dreamy-eyed and tell me how they both were official gear for the 1968 Olympics ... I'll just smile and say, "That's great Blue ... that's great".  We both know it's not true, but it gives the little guy a sense of purpose and being in this life.  And really, that's what we're all looking for.

One day I walked in on Blue watching "Sisterhood of the Traveling Pants".  Now I'm not gonna judge him, but when I asked what he was doing, he just said, "Uh, oh I'm just flippin' through channels man!"  But there were a couple of tears near his collar ... I guess its just a clothes thing.  But why he was watching that movie to begin with is beyond me.  If I ever ask him about it, he'll just change the subject.

I could go on and on about the good times I've shared with Ol' Blue!  He's more than just a thin polyester-woven piece of athletic wear.  He's a friend.  A friend with a big heart and great personality!  Sure his moisture-wicking capabilities have slipped a little over the years, he's only human.  But I can't think of anyone else I would rather spend fall Saturdays on the race course with!  So yes Michael ... someone did "call me out" on this "stupid shirt".  But they also called me out on a great friendship and a wonderful companion ... Ol' Blue!