Michael has a triathlon friend who works at Garmin, which is headquartered in Kansas City.  A few months ago I was visiting with her about my Garmin Forerunner 305's water resistance capability.  I told her that I had been very happy with it because I had worn it in the rain several times and never had an issue.  But one night last week, I ran in a DRIVING RAIN after work ... and my old friend finally met his match! 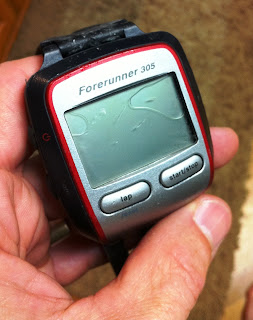 There seems to be a little water between the glass face, and the LCD display.  Right now it's just sitting there and doesn't appear to be causing any problems, as I've successfully used it a couple of times since.  Immediately after I saw the water, I put it in a bag of rice for about 24 hours.   This method has helped in the past to dry out two cell phones I dropped in the toilet.  (So yes, if you ever call me - I might be multitasking - sorry)  But the ol' rice trick had no effect on the Garmin.

The little fella has been a great friend to me and I would really hate to lose him.  But in all honesty, he's gone through quite a bit.  I've put him through sub zero to over 100 degree temperature extremes.  I've fallen at least 10 times and he's absorbed the shock against the concrete.  And not to mention the daily sweat-bath he receives without ever once complaining.  He's a good friend.  So hopefully this will just be a minor setback.  Like simply a little fluid on his knees or something.  Hopefully we'll have many more miles together.

Now ... the second "Uh-oh" ... seems someone is going the wrong way on the scale.  Admittedly, this is probably a dicey subject ... I mean in no way do intend to disrespect or demean folks who are struggling with "real" weight loss.  All-in-all I'm healthy and within my ideal body weight.  In fact most of my life, I spent my time around 210-215, which actually was a little heavy for me.  But over the last five years since I've been running so much, I'm usually around 175-180.  But this morning when I got on the scale ... 182.2 lbs.  Honestly, the only reason it's an issue is because of my half-marathon coming up in 3 weeks.  I want to PR at the Rock The Parkway Half-Marathon in Kansas City, and I usually run my fastest when I'm around 170-172.  So that's about 10 lbs South from where I am now.

So, since Michael thinks she needs to lose some weight too (I in no way agree), we're gonna  have a little weight loss contest.  She brought it up folks ... and like a good husband, I fought and fought NOT to do it.  But she's probably as competitive as I am, so we're gonna have a go at it. It will be based on percentage of total body weight.   And we haven't decided what the prize will be yet - but it started today with the official weigh-in.  I made sure I weighed myself without my wet Garmin.  We'll see how it goes.
... be great today!
Posted by Jim ... 50after40 at 6:22 AM