Six months ago I began the journey into the world of "minimalist running" in an attempt to revolutionize my stride from an aches & pains plagued heel strike, to a more user friendly forefoot/midfoot strike.  I didn't attempt the change because I was influenced by the entertaining, but very opinionated and factually questionable best selling book "Born To Run".  And I didn't do it because the new flat "heel-less" shoes were all the rage.  And thankfully, I didn't have to do it because of injury.  I simply tried it for three reasons.  First, I wanted to avoid future injuries and take the wear and tear off of my joints which often resulted in annoying, but not yet debilitating nagging pain.  Second, I wanted to increase my efficiency, and hopefully as a result, my endurance.   And finally, I wanted to get faster.  It looked as though many of the elite runners ran with similar styles, so I thought mimicking their form couldn't hurt.

I've always believed that we all have a natural foot strike for running. For most of us, the "natural strike" is the heel striking the ground first ...  just like we walk.  This doesn't necessarily apply to sprinting or running fast.  When sprinting, the body will automatically lean forward a little, and we will naturally shift the foot strike to our forefoot to avoid falling over on our face.  However, one of the main theories of "Born To Run" is that we naturally forefoot strike (almost like running on your tip-toes), but shoe companies have forced us all to heel strike with the over-sized cushioned heels that we see on almost all running shoes today.  While the author Christopher McDougall makes a very compelling case - I just don't buy into it.  (It may sound like I'm not a fan of this book - quite the contrary ... I LOVED IT!!! I just don't believe every theory I read) 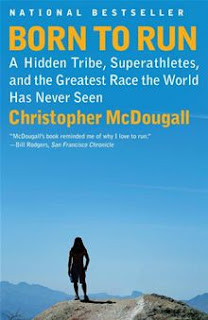 I have always been a heel striker.  There are photos of me running in team sports when I was about 12 years old, and my heel is striking the ground first.  Did Nike teach me that?   Nope!  I didn't own a pair of Nike shoes until I was a teenager.  And throughout high school and college sports, and even post graduation recreational sports ... I was always a heel striker.  In fact I specifically remember coming home after playing weekend softball tournaments with my heels aching from running all weekend in cleats with no heel cushioning.  And when I began distance running about 15 years ago, you guessed it, I hit the ground running ... heel first.

The argument of how or why I started running like this aside, one thing was for sure - I could feel it beginning to take a toll.  I logged over 10,000 street miles running like this for about 10 years. Heck, I ran more than 3,000 miles in 2012 alone - all while gradually building more and more joint and muscle pain attributed from heel striking.  Don't get me wrong, I've always been very blessed and avoided serious injury.  I was a 3 sport letterman in high school, and a college athlete ... and I barely got a scratch.  I've often told people that I'm pretty sure I have barbed-wire for tendons and joints ... I just don't seem to get hurt ... ever!  But all athletes suffer aches and pains, and get dinged-up at times.  And over the past few years I could feel the connective tissue around my ankles starting to ache a little more than ever before.  Also, I had experienced more and more bouts of minor tendinitis in various parts of my body.  So I decided before I became another 40 year old running statistic, I should take some preventative action.

I did quite a bid of research and decided that if I was going to transition from a full-time heel striker to a forefoot or midfoot striker, I was going to use the POSE method.  There are other similar running techniques such as the Chi Method, but I really liked the logical approach of the inventor of the POSE method, Dr. Nicholas Romanov.  It just made the most sense.  Plus, I was contacted by a fantastic POSE coach, Ken Schafer, who helped me through the initial stages and struggles.  I would highly recommend Ken if you are making a change.  I also received invaluable advice and coaching from Jill of Run With Jill.  She really helped me with some strengthening exercises and talked me down from the "POSE Running Cliff" a couple of times!

Making the transition from heel striker to forefoot/midfoot striker was pretty tough.  In fact, A LOT tougher than I thought it would be. I would absolutely NOT recommend it unless you are injured, or there are no other alternatives for your running.  For example, our friend Meredith recently had a tough bout with Plantar Fasciitis that is 100% related to heel striking ... I recommended it to her.  But for the average person, I would just stay with what's working for you.  There are a lot of statistics that show that most people attempting the change at some point revert back to their original running style.  It takes an incredible amount of time, focus, and dedication because it's literally a complete running transformation.  And if you ask my advice on the subject, I would definitely recommend "if it ain't broke, don't fix it."

When I first started the new approach, I was pretty skeptical.  I was convinced that I was just trading old aches and pains for new ones. (I'm still not totally convinced that this isn't the case) My calves hurt all the time.  My hamstrings weren't nearly strong enough for the change.  I was exhausted after only 4 or 5 miles each day (this from a guy who ran 9 marathons last year, and averaged about 70 miles per week).  And disappointingly, all of my race times were also way down.  Running just simply wasn't fun anymore.  This went on for about 5 months.

The two most important things I did during the transformation were reduce my mileage and strength train  (although Coach Schafer would probably argue that I didn't reduce it nearly enough). I had to cut my mileage from about 70-75 miles per week to about 25-30.  That SUCKED!!!  This was one of the toughest things for me to handle mentally.  But I literally had no choice.  I would go out for a run and either get tired or sore very quickly.  And instead of creating a new injury - I played it safe and quit for the day.  But I soon found that strengthening my calves, hamstrings, and butt really helped with the process.  I became stronger physically, which really carried over into holding this new form longer, and eventually as a natural stride.

During the initial transition I also tried a couple pairs of minimalist running shoes.  You know the type ...  they're flat, look a little like house slippers, basically missing their heel, and typically blindingly bright colored!  I was a little embarrassed to run in them because I think the whole minimalist running shoe thing is a passing fad that will be gone by this time in 3 years after a massive out-break of heel spurs.  But I tried the Brooks Pure Cadence anyway.  I love Brooks products and the Pure Cadence is a good, but it just didn't have the same amount of cushioning that I was used to.  Also, they were a little lighter than my normal shoes which was nice, but I just never felt comfortable in them and they really didn't work for me.  I'm convinced that minimalist shoes work better for minimal people.  I'm 6'-2", and about 180 lbs.  Not huge by any standard, but slightly on the larger side for a runner.  (For most races I qualify for the Clydesdale Division, although I've never entered as a plus-size runner.)  The bottoms of my feet always seemed really sore after just a few miles in the minimalist shoes.  And the few long runs I tried with them left my feet aching for about a day.  So I changed back to my Brooks with the big heels.  I wear Brooks Ghost and Adrenaline mostly.  It was a little tough at first trying to land on my forefoot, with the giant padded heel getting in the way.  But now that I'm used to them, I run with a forefoot/mid foot strike in the Brooks Adrenaline just fine.

Fast-forwarding through a long, non-fun filled running Winter & Spring ... about a month ago, things finally started becoming a little easier with the new stride and really seemed to click.  Most of my initial leg soreness from the new strike had subsided.  It seemed as though the new muscles I was engaging with the new strike had caught up to the speed at which I was used to running.  And most importantly, the tendinitis in my upper hamstring/lower butt that I had battled for OVER A YEAR had almost completely healed. And this was the biggest reason for making the change in the first place.

The tendinitis in my hamstring was a real point of frustration for me.  It wasn't like it kept me from competing.  Heck, I ran the Boston Marathon, back-to-back marathons, and PR'd twice last year with it ... but I literally felt it almost every step I took from late 2010 until about a month ago.  It was so bad that I sought out A.R.T. (Active Release Therapy) for it - which if you know me, professional help is usually the last option.  But changing to POSE forced me to shorten my stride and land on my forefoot, as opposed to lengthening it and over-striding and landing on my heel.  It feels amazing to run pain-free again.

So to sum up - Yes, my general "running health" is much better!  Yes, I'm landing naturally more forward in the foot and not even thinking about it!  Yes, I have almost all of my speed back!    And YES, I think making the change was a great move for me.  But am I truly a POSE runner ... nah, not really.  I still heel strike a little going down steep hills.  Plus, I probably would classify myself as a true midfoot striker more than anything else.  But to be sure, the POSE training helped me eliminate 99% of the heel punishment.  However, I really caution others who are considering doing the same.  It wasn't easy and I almost quit the whole process on several occasions.  I just couldn't see the light at the end of the tunnel at times.  I still haven't reached the "running is much more efficient and easy this way" threshold yet, but looking back now, I'm really glad I changed and I'm looking forward to a great summer of running!
... be great today!
Posted by Jim ... 50after40 at 1:52 PM