Just a quick update to confirm that the crazy mileage I'm logging this summer hasn't killed me ...

1)  I can't run the Boston Marathon for 2 years (insert sad face)
I've qualified for Boston three different times, but never under the new time limits.  But I've been training pretty hard this summer and am fairly confident I can do it at Wichita in October ... but we'll see.  However, this week I started looking at the registration dates for Boston and it's only open from Sept 10-21.  Problem: My race is October 14th.  The 2013 Boston Marathon will be sold out before I even run my qualifying race.   If I qualify, my time would still be good for 2014, but the week before Boston in 2014 is Michael's 40th birthday.  I'm sure we'll have a trip planned for that so I won't be able to do both.  So ... here's to 2015!!!  I was disappointed at first, and if I had never been fortunate enough to run it before, I would have been really bummed.  But like Jay Z says, Boston - "I'm not lookin' at you dudes, I'm lookin' past ya"!  Project 3:09 was never really about Boston (it's just that if I qualified we had decided to go).  It was always about finding out just how far I could push myself if I dedicated to training for one marathon.  And so far ... 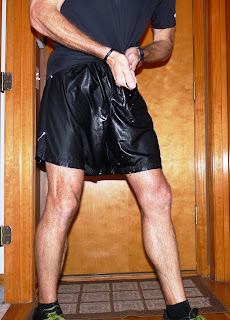 Well actually, this is the shakiest I've been so far in training when I've written something like this.  I would be less than honest if I didn't tell you the wheels are starting to wobble a little.  I'm NOTORIOUS for peaking a little too soon in training.  It's 100% my fault, but I just get excited and push myself a little too hard too early.  Typically I'm in peak physical condition about 3-4 weeks before the marathon ... and then start a slow downhill slide toward race day.  So this time I've really tried to guard against that by running much slower on recovery days.  But some of the typical little aches and pains are starting to creep in.  It's nothing serious ... and this portion of the Periodization Training is supposed to be the toughest.  So we'll see.  I just want to make sure that when I toe the line at the Prairie Fire Marathon in October, there's nothing stopping me from my best marathon.

3) Most humid run EVVVVERRRRRR!!!
It has been really dry across the Midwest this summer, and thus, humidity levels have been super low - which has been awesome for training.  But on Sunday morning, between thunder showers, I ran my 12 mile recovery in 95% humidity.  The picture on the right is me literally ringing water out of my shirt.  This is actually the 4th picture I took trying to capture the outpouring of bodily fluids from my shirt - and every time it was the same.   Ton's of water hitting the floor (yes Michael, I had a towel down).  I'm not saying there was a ton of sweat in my shirt, but I later bottled and purified it and there was enough to send as relief for 7 African villages.  Anyway, the point is I was really sweaty.  Have a great week.
... be great today!
Posted by Jim ... 50after40 at 10:56 AM