Finally, Chicago Is My Kind Of ... Marathon!

Cue Old Blue Eyes, because Chicago is definitely "My Kind Of Town"!  Why?  Well, Chi-Town is just an awesome place for starters.  But also, because we finally received confirmation of our registration for the 2013 Chicago Marathon.  We're LEGIT ... we get to run the Windy City! 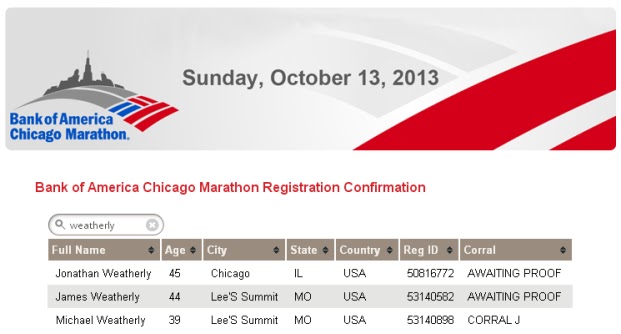 I've know for some time that I would most likely be running it.  But as you recall, the Chicago Marathon had a few administrative issues when people were trying to register and Michael and I got locked out.  We then entered the make-shift & somewhat shady lottery they held to try to remedy the issues, and didn't get chosen for that either.  But alas ... before we even attempted to register for the race, we had booked our room through Marathon Tours, which actually had a few guaranteed entries (for a "small" fee of course).  So we jumped on two of the entries because I have a feeling that next year, and from now on, the Chicago Marathon will be handled just like the NYC Marathon lottery system.  We just figured this year would be the best opportunity to run that we would have for a while.

So there's Michael and I on the BOA Chicago Marathon website, along with another young gentleman named Weatherly.  Probably related somehow.   When I got the news, I wasn't quite as excited as when I got my Boston Marathon confirmation a few years ago.  But let's just say it was a HUGE relief to actually see my name on their site.  Now I just have to get my corral secured (I should be place in Corral B) ... and keep training like a mutha.  Hope you have a great weekend!
... be great today!
Posted by Jim ... 50after40 at 7:00 AM