Over the holidays, Michael and I replaced our old Craigslist treadmill with a new NordicTrack 2450.  We did our due diligence and researched some of the best models on the market and got a really good deal on a NordicTrack 2450, from NordicTrack's website.  While I typically make a concerted effort to be positive on my blog, especially about specific products ... I can tell you that the total NordicTrack experience so far has been a total disappointment.  In fact, we are still considering returning the treadmill. 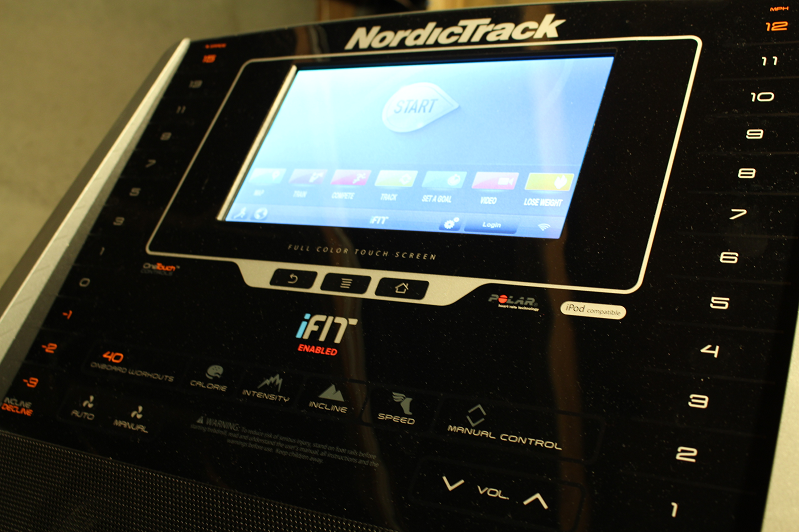 It started with the delivery.  We are definitely not wealthy, and have a very middle class home in the Midwest, but I am VERY particular about who enters it.  I absolutely don't like people I don't know in my home.  And, if you're having something delivered, you assume that it will be from a reputable company and you shouldn't have to worry about sketchy individuals. NordicTrack contracts out almost everything they do, so we weren't surprised when a non-uniformed gentleman with his co-worker showed up ... but they were 3 hours late.  However, we were surprised when the first gentleman phoned his two buddies, one who seemed to be high, to come over and hang out at my house while the first two installed the machine.  Seriously.  Michael is home by herself with four rather rough looking characters.  No uniforms ... no labeled moving van ... just sagging pants & the smell of weed.  And FYI, if you work for a moving company ... don't make a point to comment repeatedly on "how nice" the sport memorabilia is, like you're casing the place or something.  It was to the point that Michael had to make excuses about the stuff not being worth that much, and change the subject.  I could write so much more about these gentlemen, but it would probably come off wrong ... I think you get the point.  But, neither of us have been robbed or stabbed in our sleep by a returning visitor ... yet ... so we overlooked that little event. We did, however call about the 3 hour late arrival.  Surprisingly, (sarcasm) the salesman was very responsive and helpful when we were trying to decide if we wanted to buy the machine ... but was unavailable and non-responsive when we called to talk about the delivery.   We sent two emails and left numerous voice mails, with no response.

Fast forward to the first few times we tried to use the machine.  With the exception of the speed being way off, which is probably fairly normal, it worked fine for me.  However apparently, it randomly sped way up and slowed way down while Michael used it repeatedly.  We searched the internet and this seems to be a fairly common problem.  So, we decide to call the "NordicTrack Help Line".  An obvious oxymoron.  After a 57 minute hold time each and every time we called (I've called them a total of 4 times, and the average wait time has been almost an hour), we were connected with a company called IconFitness located in Logan, UT, which reps several different fitness equipment manufactures, including NordicTrack.  Like I said, they contract out everything.

When we finally spoke to an actual person, we were instructed to find a screw driver and an allen wrench, remove the cover to the motor, start the machine ... so yes, there is an uncovered open motor running ... take a flash light and then dig around inside a running machine to help them diagnose the problem on your hands and knees in the basement over the phone ... ON A TWO WEEK OLD TREADMILL!!!  The rep finally had me turn off the machine, in fairness I think that was just an oversight.  But when I asked if I could just have someone come out and look at it because it was only two weeks old, they insisted that there would probably be a  four week wait with an in home visit and this was the most efficient process they had.  I informed them that we had paid for an extended warranty that included in home repairs, and the answer was the same.  When I asked, "Well, what is the warranty good for then?"  They actually told me that they like to have people try to fix as much as possible so they would get to know their machine better, and be happy they were able to "fix it themselves".  Huh???  I'm pretty technically sound, handy with tools, can build pretty much anything, and speak to architects and engineers for a living ... if I want to "fix it myself" I think I'm perfectly capable.  That seemed like a really ignorant answer.

After another hour on the phone with me fiddling with the machine, the very friendly, but completely script reading & totally guessing at the diagnosis phone technician concluded that it had to be a speed sensor.  She asked me, "Do you want me to order the part for you?"  ... A wait, what?  "How am I supposed to know?", I replied!"  She then told me that she had to have permission to order a replacement part.  So I told her yeah, let's get it coming.  To which she replied it would be 7-10 business days.  To which I replied, "Um, no it won't ... it's gonna go out tomorrow and be here in 2 days!"  IT'S A FRIGGING TWO WEEK OLD MACHINE!!!  After "checking with a supervisor" for about the 10th time on the call, she agree and we got the part for the faulty machine yesterday ... which I installed myself, last night.

It seemed to work okay once I got it installed, but we'll see.  We still have about 2 weeks left on our 30 day free trial, and the thing seriously might get sent back.  I'll keep you posted.  If I could snap my fingers and the thing would be gone and I would have my money back ... I would snap them ... RIGHT NOW!   But honestly, with the hassle we've had so far, I'm sure that process will be a cluster too.  Things would have to get pretty bad for me to go on a "Don't buy a NordicTrack" campaign.  I just typically don't disparage companies like that.  But unless things change, we're definitely headed down that road.  Hope your treadmill experience is better than ours.
... be great today!
Posted by Jim ... 50after40 at 5:09 AM