The Benjamin Button Of Marathoning

Not sure why I keep droning on about Facebook - just a mood I'm in I guess.  Honestly, I really did't think I'd ever be on Facebook, but it's been kinda cool so far.  And the friend requests and "likes" are literally pouring in by the 2's and 3's.  I'll probably have 20 friends before long.  That's like 19 more than real life!  I know you're jealous.  I was recently shamed into putting a widget on the page for easier access, so the badge at the left is for my 50after40 page ... feel free to "like".  If you're not underwhelmed enough by that, you can track me down on my personal page.  I'm sure I'll friend you ... my friend rate is 100% so far!  Anyway, there's the ol' Facebook update for the day.

If you've read my blog for a while, you're probably aware that over the years my marathons times have gradually crept down, even though the number of grand kids, grumpiness, and wrinkles are steadily on the rise.  And someone asked me today, "What do you feel has helped you increase your pace over the years?"  I thought about it for a minute, and then replied ... "I've got a time machine!"  Man wouldn't that be so awesome ... a time machine!!!
Uncle Rico: Kip, I reckon... you know a lot about... cyberspace? You ever come across anything... like time travel?
Kip: Easy, I've already looked into it for myself.
Uncle Rico: Right on... right on.
(from Napoleon Dynamite ... duhhh)

But then I told him, "Actually, I'm just running faster in training."  Without over simplifying it too much, that's basically it in a nutshell.   For years I was just not running fast enough in training to achieve the desired results on race day.  Running more miles at my goal pace, have made the races more manageable with increased times.

Like a lot of you, I spend a lot of time reading fitness blogs, and studying training information about running.  It seems like when I started running marathons in 2009, the trend was toward running your long runs considerably slower on race day.  And there seemed to be as much or more time focused on the slow, gentle recovery runs, than really revving the engines too much on tempo & long runs.  I followed the general consensus and trained this way for a while, but always seemed to fall short of my marathon goals on race day.

I remember thinking, "This doesn't make sense ... how am I supposed to run at an 8:15 pace in all of my 20 mile training runs, and then magically flip a switch on race day and run a 7:40 for 26 miles???"  At the time I was using the Runner'sWorld Smart Coach application. It's a somewhat personalized plan based on some basic data and goals you put into the formula.  I even called the Runner'sWorld department responsible for putting the plan together to ask them a few simple questions about why the program was developed like this.  I basically got an "I don't know, but running slower on your long runs just works".  I was kinda looking for a little science behind the theory, but I think the basically plan was developed from years of coaching input.

So I decided to start trying a few new things ... namely running a lot faster.  Well, that's actually not the only thing.  I also added a considerable amount of strength training for my legs.  I made sure I stretched on a regular basis.  I only ran 5 days per week, as opposed to 6 like in the past. My diet got markedly better.  And I lost a little weight.  But the main thing I changed was my running speed during training.  And the result was gradually improving marathon times, with fairly consistent Boston Marathon qualifying times.  This chart illustrates the decline in finishing times ... 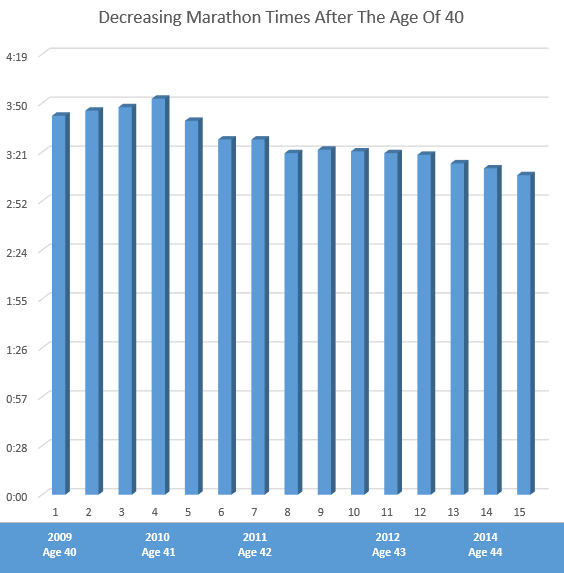 Here are 15 marathons I've ran after the age of 40 showing steadily decreasing finishing times as I've aged.  For this chart, I only included the races where I ran competitively against myself, trying to PR or run my best on that particular day.  I took out a couple of races where I was under the weather, one where my IT Band was a little injured, a couple where I paced friends and my wife, and the two that I ran back-to-back in KC and Des Moines where I intentionally ran a little slower to make sure I finished them both.  Basically the point of the chart is to show that when I've ran my best over the past 5 years, the marathon times have consistently improved with 3:45's from 2009-2010, 3:20's from 2011-2012, and finally 3:10 & 3:15 in 2013.

The biggest difference in my training are the tempo & long runs.  From 2009 to mid 2011, I would consistently only do about 6-8 miles at tempo pace,which was about 10-15 seconds below my targeted marathon pace.  But over the last few years, I not only tried to do two tempo runs per week as opposed to one, I also increased the length to about 9-11 miles at tempo pace.  I also tried to drop the tempo pace to about 30 seconds below my targeted marathon pace.  So essentially I was running faster for longer periods.

For my Saturday long runs, I started running about 75% of the run at marathon pace, or even a few seconds below marathon pace.  For example, I was adamant with myself that there was no way I was going to average a 7:15 overall pace on race day, if I couldn't hold 16-18 miles at that pace without too much trouble during training.  So for my 7:15 goal pace in Richmond, I ran a lot of miles on Saturday at 7:10'ish.  I did this for about 3 out of every 4 longs runs, basically taking one long run a month fairly easily and trying to stretch out the miles to 22-24 or so.

The consistently faster speeds were a lot tougher to manage week in/week out - but it didn't take long before I started seeing results.  My race times began to drop, and I actually PR'd at Richmond with a 3:10 at age 44.  And I fully intend on using this approach in 2014 as I try to break the 3:00 mark.  But that's still a lot to whittle off that time, so we'll see.  And of course, I feel like I always have to add a disclaimer ... THIS IS MERELY A DESCRIPTION OF THE PROCESS THAT WORKS FOR ME.  It might not work for you, or you might not want to even try it.  No worries. But I'm just always interested in reading what works for others, and this plan has been a lot more effective for me than the previous training.

To be fair, there has been a sizable amount of experience gained from all this marathon training as well.  I've learned what works and doesn't work for my body.  I know when to push it, back off, or just keep on truckin'.  But they say the definition of insanity is doing the same thing over and over, while expecting different results.  And that pretty much summarized my previous training and running.  Until I got it through my thick head that, "If I was going to run faster on race day, I had run faster in training", I always ended up disappointed at the finish line. I learned that I couldn't just go through the motions of training, ya know, just "check the box" to get through another workout.   I really pushing myself to my pace limit.  Once I got my mind around that, I ended up crossing line at personal record times.  Will I run even faster in 2014 ... I dunno.  But I'm gonna try.  I figure at this rate if I keep aging backwards, I'll be an Olympic Qualifier by approximately age 64.  And then maybe they'll make a movie about the Benjamin  Button Of Marathoning.  Have a great week!
... be great today!
Posted by Jim ... 50after40 at 2:27 PM