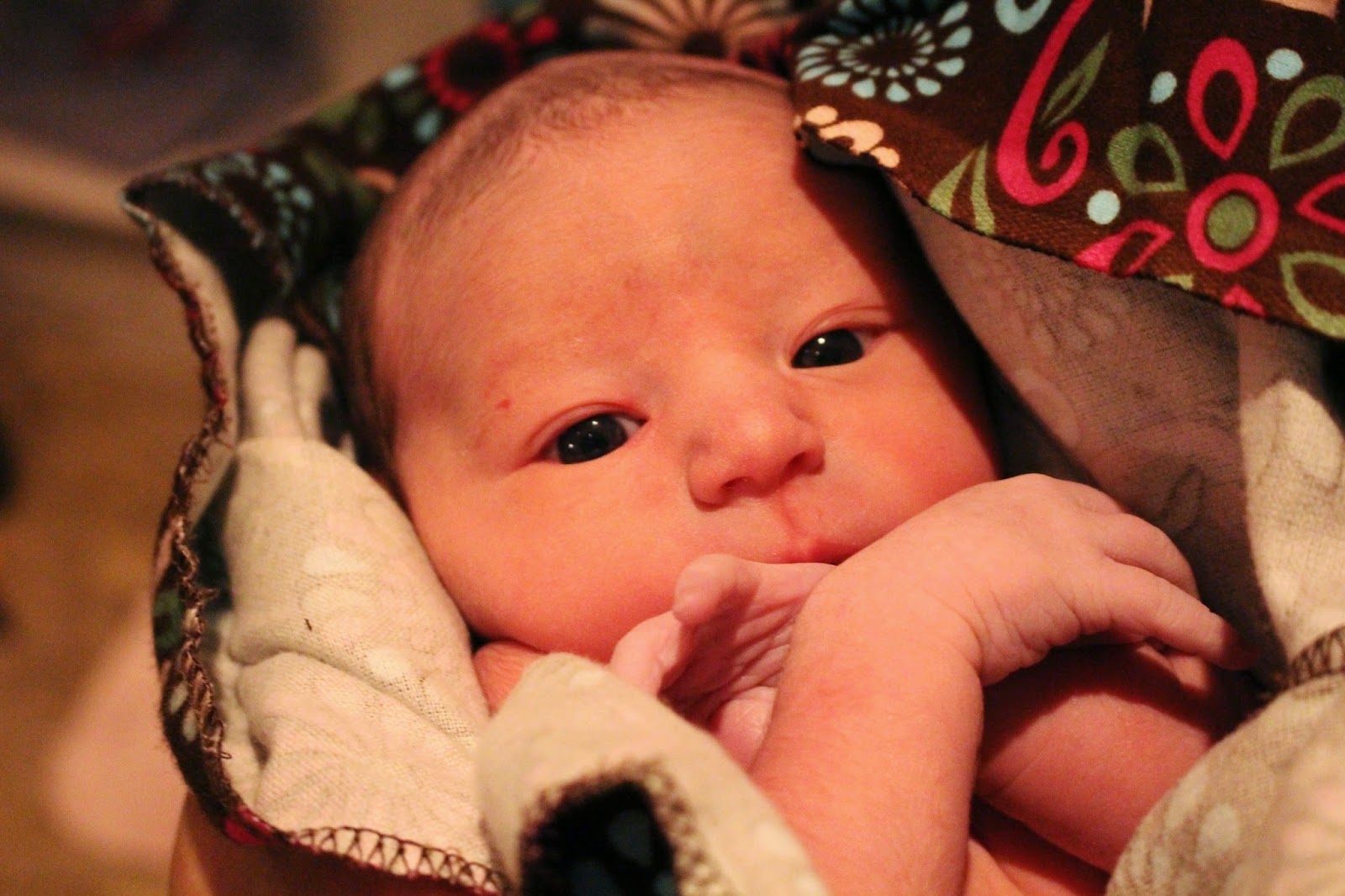 For two days before the race on Saturday, my daughter was in labor.  That killed me.  If you ever had a daughter in labor, you know what I mean.  I was constantly worried about her and really hoping our sweet little granddaughter would come soon and give her mom a little relief.  So we were so excited when we got the call on Friday night, that Madison was finally at the Birthing Center.  We hopped in the car at about 6:30 pm, and zoomed over so we would be there when our second grandchild arrived, knowing that the race the following morning might be in jeopardy.  No matter, we were focused on the arrival of Miss Savannah Grace Baker!  And about an hour later, the little princess arrived!!!  We gathered anxiously in the waiting room for a while before finally being able to see her for the first time, as well as check on mama ... who did great ... just like everything she does!  Savannah was beautiful, just like we knew she would be.  We all took turns hold her, and it was obvious she liked Papa J the best.  We visited for a while, and at about 12 am, Michael and I finally put our head on the pillow for a few short hours of sleep before the race the next day ... which now, instead of The Garmin Wickedly Fast Half Marathon, was The Savannah Grace Race!

This half marathon was originally supposed to be my Spring "A Race".  I'd planned on running in the 1:25's ... which I knew would be really tough for me, but I thought with an aggressive training plan, was possible.  However, I quickly found out that running that fast in a half is still quite a ways out of reach.  Not helping the situation was an endless list of setbacks and distractions in this training cycle like I've never experienced for any other race - the worst of which was a 20 day battle with bronchitis only a month before the race.  So I knew going into the run that it would be solid, but not great.  In fact, I commented on my last post a couple of weeks ago ...  "I usually know if it's gonna be a nice run, or if I'm gonna struggle to keep pace.  And as I sit here and think about Garmin, I imagine I'll probably be around 1:28-1:29"  which is exactly where I ended up with a 1:29:15.  Solid, but definitely not great.

Even though I knew I would be nowhere near 1:25, I definitely wanted to improve my PR of 1:28:09, ran last year at The Indy 500 Festival.   And based on my training times compared to last year, that should have been no problem.  But the Indy course is the single flattest course I've ever ran.  And on Saturday, I really felt like I would have been in the low 1:27's on that same course, but the hills at Garmin really seemed to slow me down a little more than anticipated.  I just fought it for much of the second half of the race.


Races in the Midwest are funny sometimes.  They are almost always billed as "flat" or "fast" courses.   And if you're traveling here from out of State, I think there's a perception that all of us here in "fly-over" country live on pancake flat farms with nary a hill in site.  But all you have do is run the Kansas City Marathon, or Hospital Hill, or Rock The Parkway ... or The Garmin Half Marathon, and you'll get all the rolling hills you want in a race.  Mind you, it's not the Rockies or the Appalachians, but if you're trying to set a PR, there are MUCH better options out there than many of our local races.

The Garmin Half is nicknamed "Wickedly Fast", but since they rerouted the course a couple of years ago, I would call it anything but "fast".  In fact, the female winner was only 1:29:30, which is not blazing for a race this size.  There's only 350 ft of total ascent on the course, but many of the inclines, though short, are steep, and enough to severely break your pace.  Plus, the three mile stretch from 8.5 to 11.5 is a gradual uphill that really seemed to hinder my pace.  In fact, that's where I lost my race on Saturday.  I just couldn't hold the pace through that stretch.  I felt like I was running strong, but every time I looked down at my watch, I was about 30 seconds off my time.

It started raining during mile 12, but the skies were black!  There was a ton of lighting, and I really thought they would stop the remainder of the race, but they never did.  About five minutes after I crossed the finish line, it began pouring.  About 5 minutes after that, it began hailing.  It was pretty intense for a little bit.  Michael was still on the course and said it was miserable. 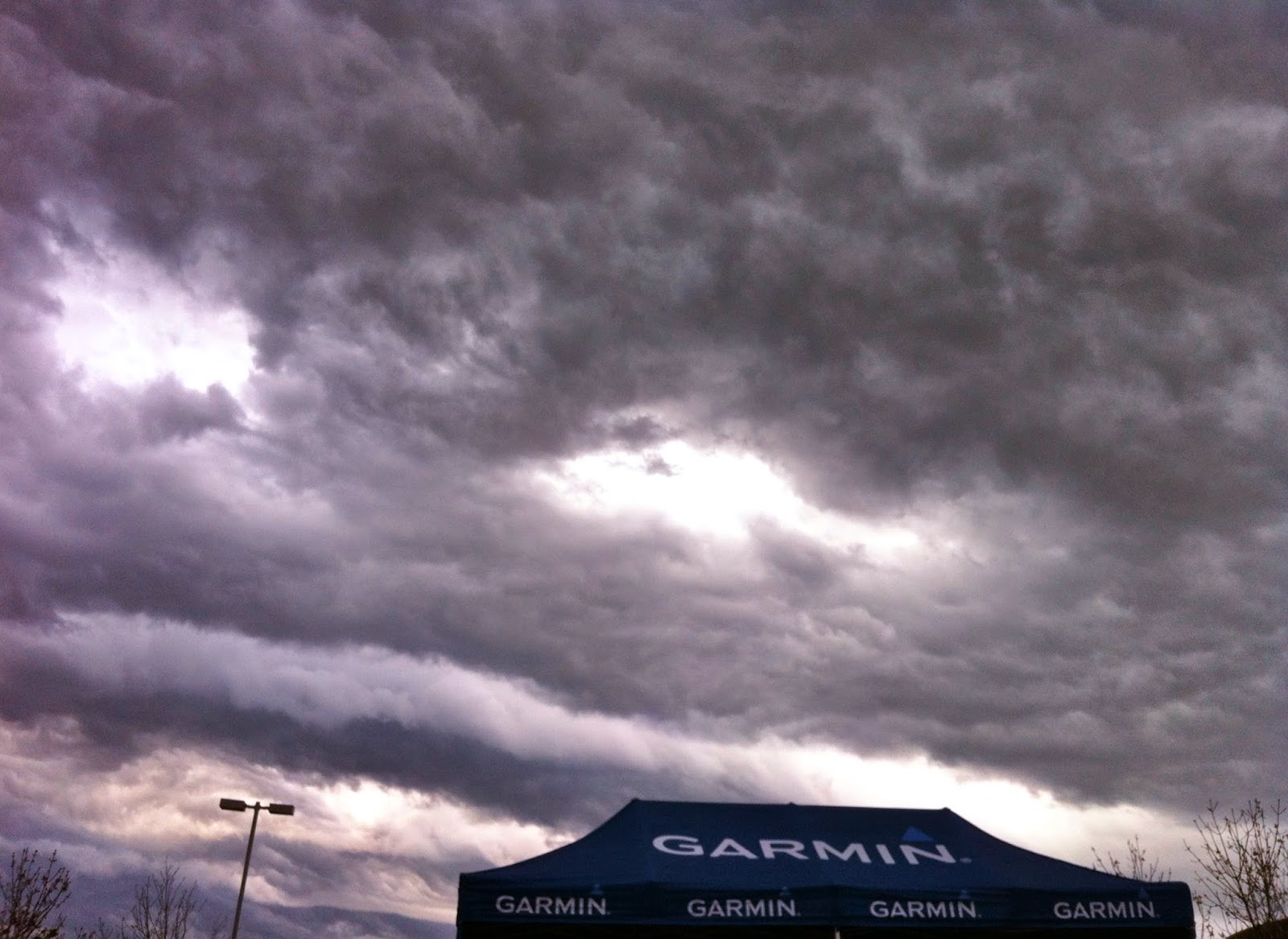 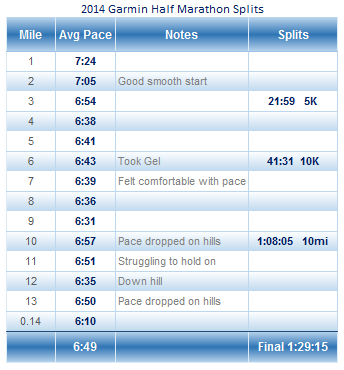 We got to the race a little later than anticipated on Saturday, and I really needed to make a "pit stop", which meant standing in line forever at the port-o-potties.  I don't usually have that issue.  After that, I only had about 6 minutes to warm up.  I had planned on running two warm up miles to get my heart rate up before the race.  But I only had time for about half a mile.  However, I really don't think the lack of warm up had anything to do with my performance.  I seemed to be able to ease into my pace like I'd planned, and my legs felt fine at the start of the race.

It was pretty much the perfect morning for running, with temps in the mid 50's and not much wind.  I initially wanted to use last year's PR as a pace guide.  And for the first few miles, I was a little below last year's time as anticipated, and really felt good.  My pace was solid, breathing was easy, and my legs felt strong and ready.

Miles 4-6 were the first real challenge of the race.  There were fairly sharp up & downs, with a long, gradual mile climb.  I had planned on being around 6:40 pace during that stretch, and managed it fairly well.  For most of it, I really felt my legs wanting to accelerate, and had to keep consciously slowing myself down.  Which is usually a great sign.

At mile 7, I had planned on keeping my pace in check until I made it past the Interstate 35 overpass, which was a short, steep climb, followed of course with the corresponding decline on the opposite side of the bridge.  After that I would put the hammer down and finish strong.  Problem ... when I pushed the "speed button", there wasn't the response I had anticipated.  I was able to increase my pace a little to the 6:30's, but I was really starting to grind a little.  The pace just became tough to handle with the slow incline at mile 8.

It became very clear at mile 10 that there would be no PR today.  I felt like I was running strong, and my legs had good turn over, but every time I looked at my Garmin, it read "6:50's", and not "6:20's", which where I wanted to be at this point.  Since I wasn't going to PR, I really wanted to just shut it down and jog to the finish.  But I'd written "Savannah Grace Baker" on my race bib for inspiration, and in a strange way, I felt like I'd be letting this little baby down if I quit.  Although, I seriously doubt that she was even aware of the race on Saturday.

So I kept grinding out those last few miles at a disappointing pace, and just as the rain was beginning to thicken, I crossed the finish line with a 1:29:15, which is a much slower than anticipated average pace of 6:49.   On the tough course, it was good enough for 26th overall out of 2,200 runners, and 2nd Place in the 45-49 Age Group.  Not bad, all things considered.

After that, I hurried back to my car as everyone was scurrying for cover from the sudden downpour.  The disappointment from my race quickly grew to concern for Michael, who was still on the course ... in the middle of the lightning, pouring rain, and hail.  Considering all of the lightening strikes, I really figured they would stop the race, but they never did.  And really when you think about it, what's the point of stopping it anyway.  All of the runners would still be outside with no cover, whether they were running or  not.  It seems like it just makes sense to let them keep running. 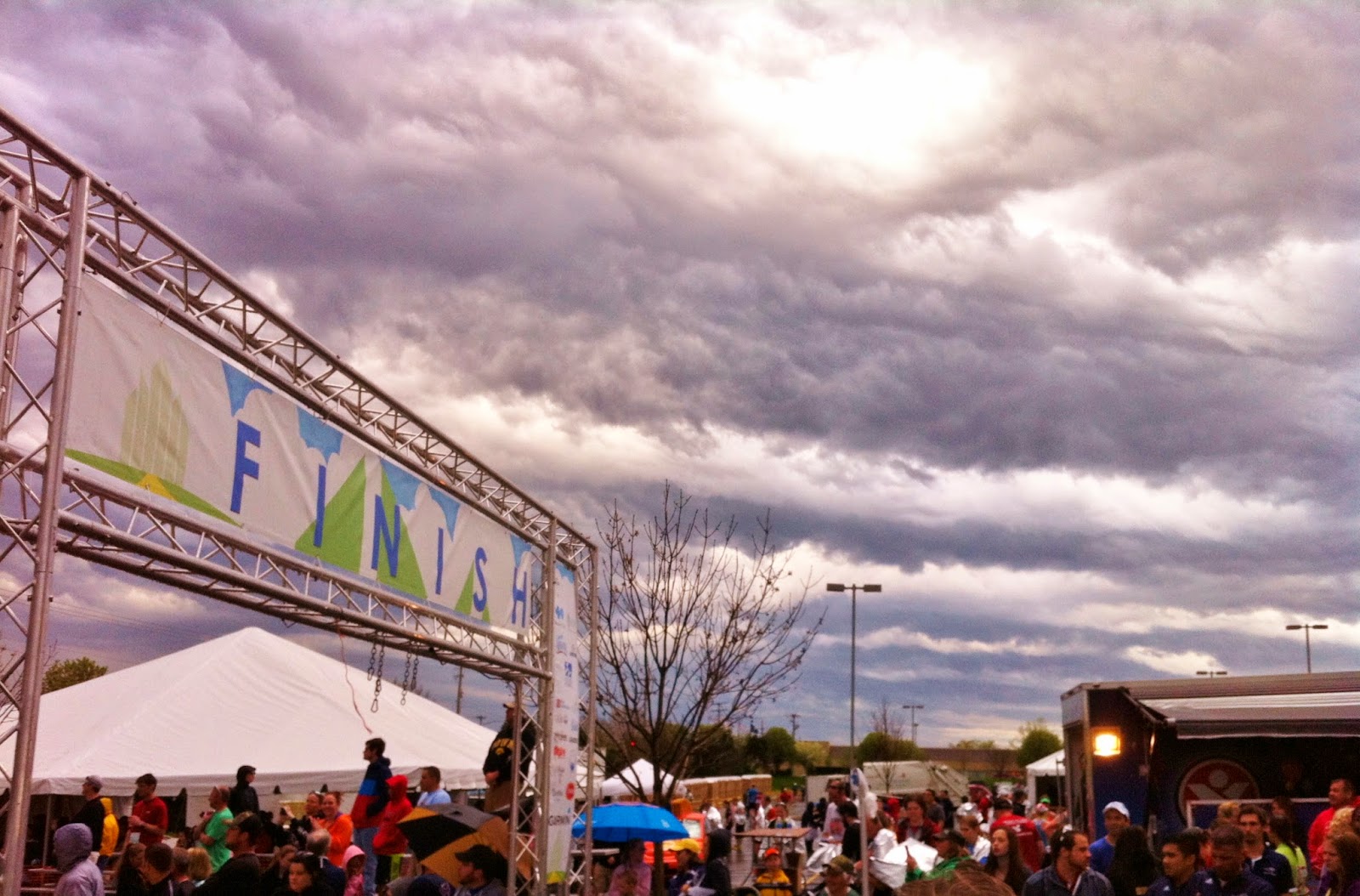 Just before Michael finished, it stopped raining, and I was able to get a couple of photos of here finishing strong.  She ran a pretty good race on Saturday.  I had went back to the car and grabbed her jacket because I knew she'd be freezing, which she was.  After that we hung out at the post-race for a while, but then quickly headed back to Lee's Summit to spend more time with that sweet little baby. 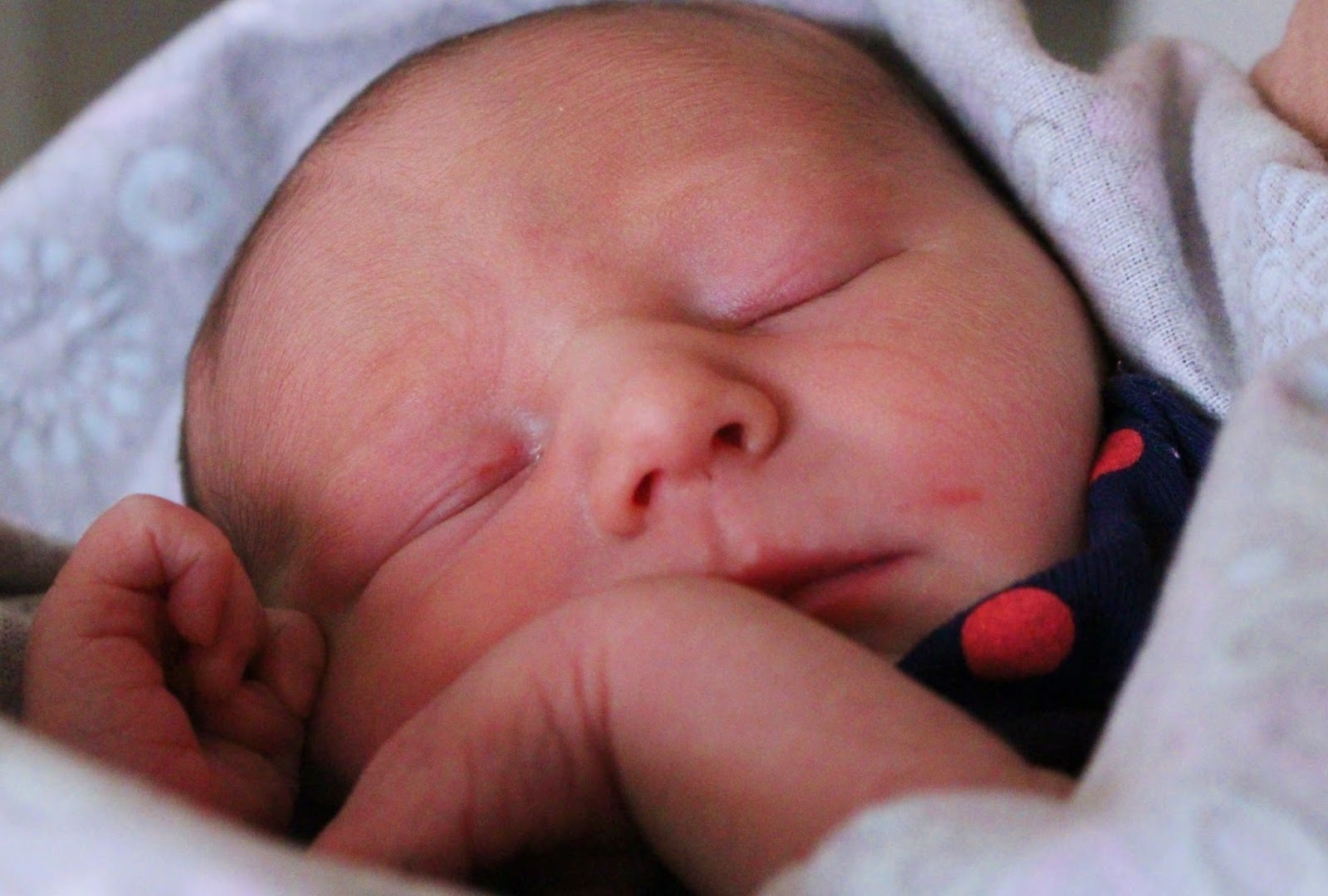 All in all, I would call Saturday's race "a tie".  It definitely wasn't a victory, because it was only the 3rd fastest half I've ran.  But it was, by no means, a defeat.  I finished fairly well on a tough course, and I really feel that on a flatter course I would have PR'd.  Considering all the setbacks I had during training, I'm fairly satisfied with my conditioning right now, but it needs to get better.  But for now, we're gonna focus on snuggling with that sweet little granddaughter, Savannah Grace.
... be great today!
Posted by Jim ... 50after40 at 8:46 AM