2014 Running With The Cows Half-Marathon Report

2014 Running With The Cows Half-Marathon 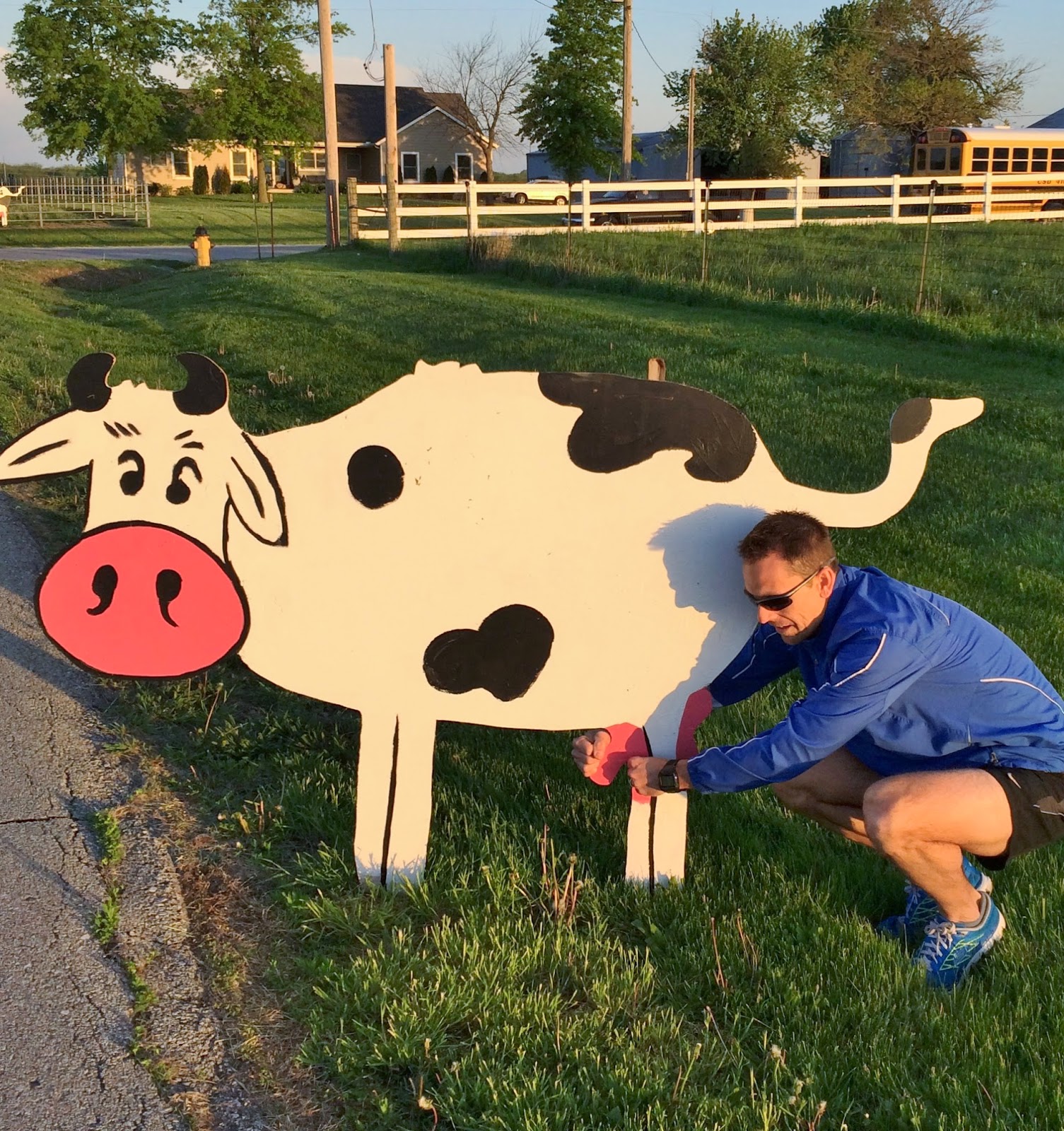 The Running With The Cows Half-Marathon is the final leg of the Heartland 39.3 Race Series, which is a three race medley, ran over five weeks, and in two States.  The series also includes Rock The Parkway and The Garmin Half-Marathon.  Michael completed all three races - because she's amazing and awesome - but I only ran Garmin and The Cows.  A special medal is awarded to runners who complete all three races, which Michael will have in her report at her blog, SlowlyTri-ing.

I think the way I would best describe the Running With The Cows Half-Marathon, is a "Sunday after-church cookout at your Uncle Fred & Aunt Martha's farm".  It was very warm, friendly, and simply charming.  The event is a fundraiser for the Holy Rosary Catholic School in Bucyrus, KS.  And from the moment we stepped foot on the shuttle buses until the time they dropped us off after the race, we were overwhelmed with hospitality and kindness.  The volunteer on our bus even read us few facts about cows and the surrounding area as we drove to the starting line.  It was cute and funny, and a just one of the little extra touches they spent time on for their race.

In addition to the endless friendliness, we were also served a wonderful "pot-luck" dinner inside the school after the race.  There was an unbelievable amount of food!  Many of the school parents had brought aluminum foil covered dishes, just like at a family get-together, and it was amazing.  In all of the hallways of the school, Crayola-colored signs hung as artwork and inspiration for all the runners.  And of course there were cows!  There were cow signs, cow hats, cow tutus, humans dressed as cows, and real cows hanging out with people.  There was even a dairy cow in a trailer I think you were allowed to milk - but we were on a tight schedule after the race and I didn't have a time - or I would have given it a whirl!  It was a wonderful atmosphere, and a great way to spend a perfect Saturday morning.  It was obvious that all of the volunteers took great pride in the event, and they had spent a lot of time planning and organizing every detail to make it a success - which it was!

Before the race started, Michael and I were approached by a gentleman named Anthony.  He said, "50 After 40!"  I smiled and said, "Yeah!"  He said he'd recently found the blog and had read a couple of race reviews.  He was a really cool ex-Marine who we visited with for a while.  It's always a bit surreal to meet people who actually take the time to stop by your webpage. But, over the years, I've made several friends that way.  It was great to meet you Anthony - I hope your race went well!

As far as my race goes ... eh, I've had better.  Sometimes you're the windshield, sometimes you're the bug.  Today I was definitely the latter!  It wasn't an all out "disaster-race" or anything - I mean I still finished 4th out of 70 runners in my Age Group Division, and 41st out of 1,679 runners overall.  So that's nothing to be embarrassed about.  But it was definitely a "C-" or "D+" effort on my part, just very forgettable. I kind of had a feeling it was going to go that way, in fact, I almost didn't run it.  But sometimes races go really well even though you don't feel great going into them ... this was not an example of that!

I love running with headphones.  And as I began my warm up a few minutes before the run, I noticed that I'd lost one of the earpieces on my iPod and couldn't use it for the race.  It wasn't a deal-breaker.  I've ran plenty of races without it, but I definitely prefer music - especially on this course.  Because even though the pre and post race activities are some of the best I've experienced ... the course is one of the most boring I've ran.  It's 13.1 out & back miles on rolling hill'd county roads with absolutely no visual stimulation except for hay fields, they next hill, and the runner's back in front of you.  And speaking of the hills, my hip flexors are getting really tired of racing on "rolling" hills.  Most folks who aren't from the the Midwest have a preconceived notion that all of our races are comprised of pancake flat routes.  And while their not up the side of mountains or anything, many of the races around here can be a little challenging ... especially if you are "racing" them and running full tilt.  This race was  no exception.  It would be fine for a simple workout, but trying to keep race pace became a little tough after all of the up's & downs.

As soon as the gun went off, I had a feeling I was in trouble.  We passed a donkey standing near a fence ... no, not a cow ... and he was "Heee-Hawwing" so loud that it made all of the runners in my group bust out laughing.  But I didn't laugh, because I knew he was mocking me and my attempt at a fast race on Saturday.  He ended up being right.  I just fought the pace all day! 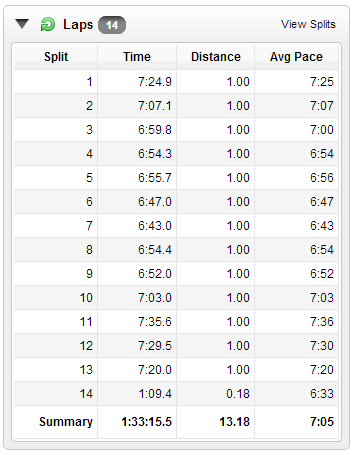 I started slow and tried to control the momentum.  I knew there were literally 18 hills that we had to make our way up and down, so I needed to make sure I didn't go out too fast.  And as far as that strategy went, I felt like I handled it okay.  For the first 7 miles of the race, I was pretty much where I wanted to be, but at mile 8, I really started to grind.  That's where we made our turn-around, and the back half just seemed much tougher than the front to me.  Plus, there was a 10-12 mile headwind that really distracted me for some reason.  A wind of that speed is not really enough to slow you down too much, but that, combined with the hills really got in my head.

My pace at mile 8 really dropped off and I began to struggle the next couple of miles to keep a 7:00 stride.  And at mile 11 ... I walked ... IN A FRIGGIN' HALF MARATHON!!!  It was embarrassing, but I literally had to stop and catch my breath on one of the hills.  And that's when people started passing me, left & right!

After the quick breather, I picked my pace back up, but had to walk a few more times over the next few miles.  I saw quite a few other runners walking too, but that really didn't make me feel better.  I knew that I wasn't in peak shape for this race, but I was really surprised with how far my conditioning had fallen off over the past few weeks.  I really struggled in the last miles and couldn't wait for the dumb thing to be over.  I finally crossed the finish line with aching legs, and an extremely disappointing 1:33:10.  And to say the least, I wasn't very happy.

I try really hard not to express negative emotion after a race in public.  And meeting Anthony before this race was the perfect example of why.  I don't want someone to see me for the first time, and have them think ... "Wow, that 50after40 guy was a total jerk!".  So I immediately found a port-o-pottie (which I really needed anyway) and while inside ... let out a litany of profanity-laden admonishment toward my running ability, conditioning, and apparent unwillingness to finish a race.  I really let "me" have it!  So if you were in the stall next to me ... sorry!  But as soon as I got it out of my system, I was fine for the rest of the day.

After the race, Michael and I ran into our friend Christa and her brother-in-law.  They asked how I did, and I told them "Not well".  Christa asked what my time was, and I told her 1:33, and her bro-n-law said, "NOT WELL ... with 1:33 ... you're an A--hole!"  He was joking and we all laughed.  And when I told Christa I had to walk a lot of the last few miles, he said "You're not making me feel better!"  I've learned over the years that when you finish toward the top of your Age Group Division, even on a really bad day like Saturday for me, you don't get a lot of sympathy from other runners.  Yes, I know many runners would love to have the "disappointment" of a 1:33 half-marathon.  But like I've said repeatedly, the finishing time is completely relative.  It's simple an individual marker or benchmark that is specific to that individual.  Someone can run a 2:50 half-marathon and be elated with their race, while others could finish with a 1:20, and feel disappointed.  The actual time on the clock just doesn't matter - it's more about the experience and how the run was perceived by the person who ran it.

I would highly recommend, The Running With The Cows Half-Marathon.  It's a great snap-shot of Midwestern hospitality and friendliness.  But on a personal note, it was a real eye-opener for me and what I need to do to get back to where I want to be in races.  Michael and I have had a lot going on with family and work issues, but I've used it as an excuse not to work out way too much lately.  I need to increase my mileage again, and strengthen my core.  I still have full intention of running a 3:00 marathon in the fall.  And Saturday was probably the kick in the pants I needed to get my lazy butt back into training.  Hope your running and racing is going well!
... be great today!
Posted by Jim ... 50after40 at 8:54 AM