If you've read my blog for a while, you know I'm sort of a "Stat Geek" & "Numbers Guy".  I'm pragmatic.  Rarely impetuous.  And I love data because it often reveals the truth about a situation that is sometimes masked by perception.  Actually, I'm pretty much an overall nerd ... in coolest sense of course.  But I love keeping statistical data, if nothing else, for comparison sake for future training.  For example, 2013 was my best running year yet.  I was definitively faster and in better shape than ever before.  So using 2013 as my baseline, I've put together a couple of side-by-side charts documenting all of my long runs from last year, and so far this year.

Why you ask?  Well that's a great questions, and thank you for the interest!  My goal is a sub 3:00 marathon in the Fall.  With that in mind, I need to be faster during 2014 summer training than I was last year when I ran a 3:10 at Richmond in November.  The two charts will basically be a quick comparison reference.  Of course this isn't a perfect system, since there are several external variables that influence my long run on the weekend such as weather, health, course, races, tapering, etc.   But from this snapshot, I should be able to draw a  reasonable conclusion of my current fitness level compared to 2013 as race day approaches. 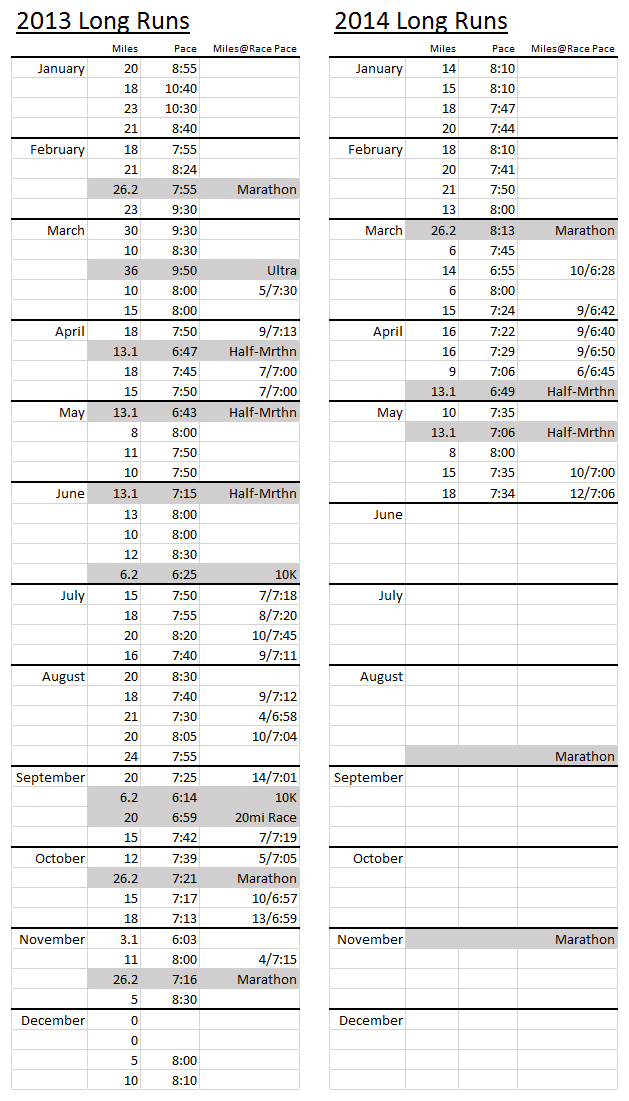 One of the main keys, if not the single most important during training, is "Race Pace Miles" during my long run.  It's so important for me (and you too, in my opinion) to run as many miles as reasonably possible at race pace or below during training.  That way, the pace doesn't surprise me on race day, and feels completely normal because I've done it time and time again during training.  I'll watch those paces fairly closely this summer - as well as several other bits of information that most people could care less about.  But again ... I'm a nerd!
... be great today!
Posted by Jim ... 50after40 at 3:19 PM