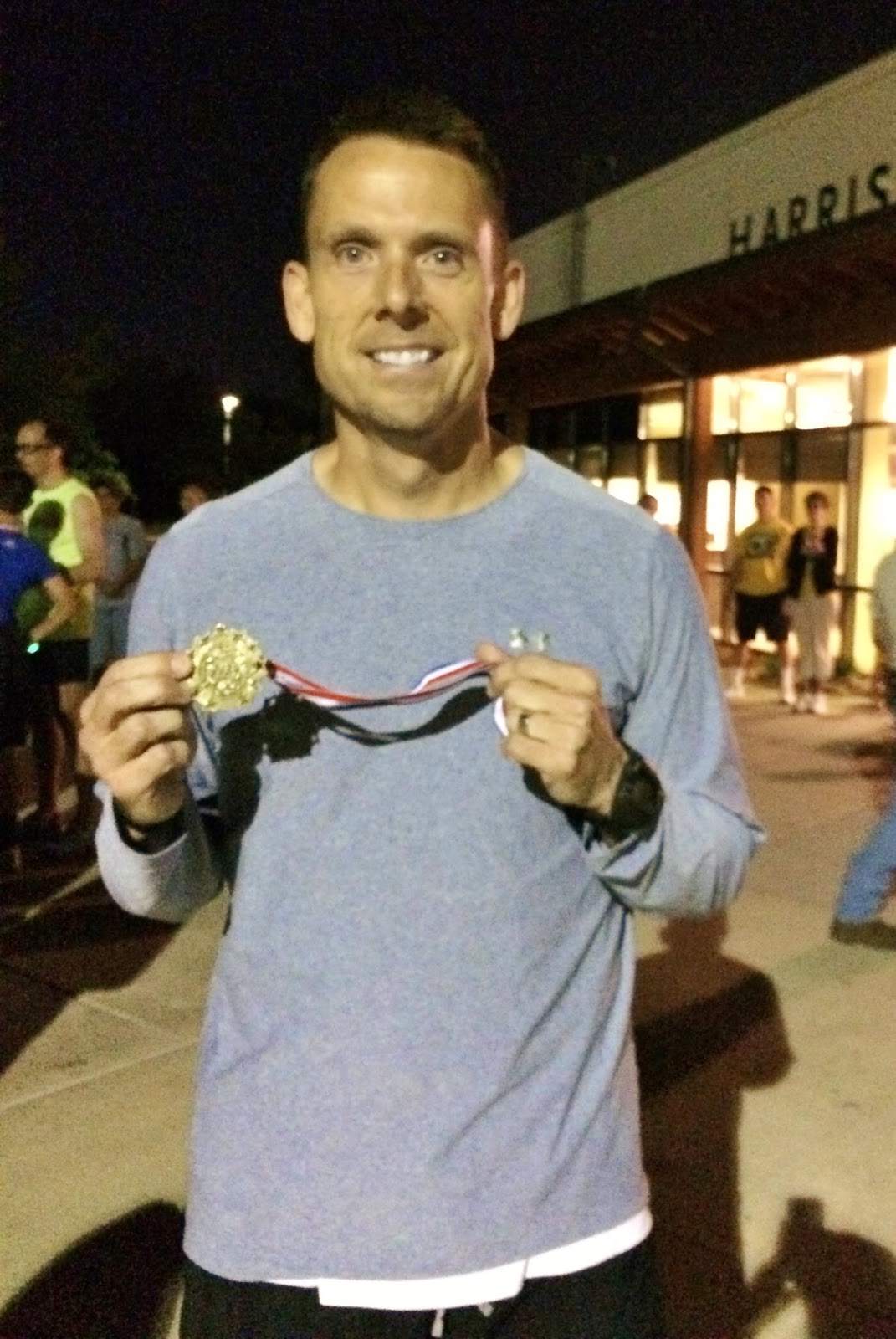 
Friday in Lee's Summit, Mo - our hometown - was simply a perfect day!  The sun was shining for the first time in about a week with a perfect 75 degrees and light South breeze.  So we decided to run a 5K on Friday night!  Actually we decided earlier in the week when my friend Paul sent me an email "daring" me to run the race - ha.  Well, how could I back down from a dare ... right?

Paul is a really cool guy I met through my blog and lives in Lee's Summit about a mile from us.  He started running a couple of years ago, and recently trained for his first marathon in Minneapolis.  Yep ... Minneapolis!  If it sounds familiar, it's the one that got cancelled because of lightening a few weeks ago, literally while everyone was lined up at the starting line.  Poor guy ... all that work and no marathon.  He was obviously disappointed, but I think he's planning on running another one before long.  And Friday night was a great run for him.  He was trying to PR, and actually ended up smashing his old 5K time by over minute!

Before the race, Michael dropped me off at the corner gas station, where Paul and I ran about 3 miles to the race as a warm up.  It was the perfect distance.  Sure, two grown men running down our local busy streets on Friday night with race bibs on looked a little below average ... but a car full of young high schools girls honked at and screamed at us!  Several years ago, that would have made my night ... but unfortunately, I think they were probably just mocking two old men. Oh well.

When got to the race, I spent some time warming up and doing some sprints around the parking lot.  I've recently started marathon training again and really wasn't sure where my conditioning was.  I felt like I was fairly fast (for me), but really didn't know.  So I was anxious to run the race and use it as a benchmark for my summer training.

The Lees Summit Night Flight 5K is a race held every summer that I first ran back in 2002.  It was one of my first 5K's, and benefits local Lees Summit parks.  It's a fun race because it's ran after dark through downtown, which is little different since most races are held first thing in the morning.  The course is an out & back, so on the way back it's pretty interesting seeing all of the glow sticks from the race bags wrapped around necks and wrists as they bounce their way toward you in the dark.  Like a swarm of 5K fireflies.  It's also started and finished at Summit Waves, our local water park.  All racers get a free admission into the park, which we opted not to take advantage of this year.  I've ran this race with Michael a couple of times, and actually with my daughter back in 2011, so it obviously holds a lot of good memories.  It's just a really fun, and small local race that we enjoy. 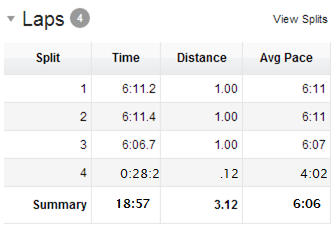 The Race
I went out fairly even and controlled.  The course is pretty flat, but there are a couple of 50 ft rolling hills in the middle, and a little incline at the end, so I wanted to make sure I left enough energy for those.  The first mile was really easy, and I felt like I wasn't pushing at all, just gliding.  There were less than 300 runners this year, and not a lot of super-fast runners at the front.  So I stayed near the leader for most of the race, and directly behind the lead pack for the first mile.  As we  made our way downtown, my Garmin buzzed with a nice, smooth and easy 6:11 first lap.

During the second mile of a 5K, you usually start to weed out a few folks here and there.  Regardless of pace, if you're racing it, things start to get real at about the half way point.  And this race was no exception to every other 5K I've ever ran.  It was obvious that legs were getting heavy, breathing was labored, and paces were slowly beginning to drop.  We ran through the retail shops of downtown Lees Summit, and there were a few people gathered watching on the streets from local bars.  At the turn around point at 1.6, I passed about three guys I had trailed to that point, and at about 1.75, I passed another.  There were only 4 runners in front of me, but I was starting to feel a little fatigue.  Before to long, my Garmin buzzed again in the darkness at mile two along Douglas Street.  I had ran another 6:11 to match the first mile split.  I was elated!  I remember thinking that regardless of how I finished, I was running a lot stronger than I thought I would going into the race.  But of course, there was still a little work to be done. 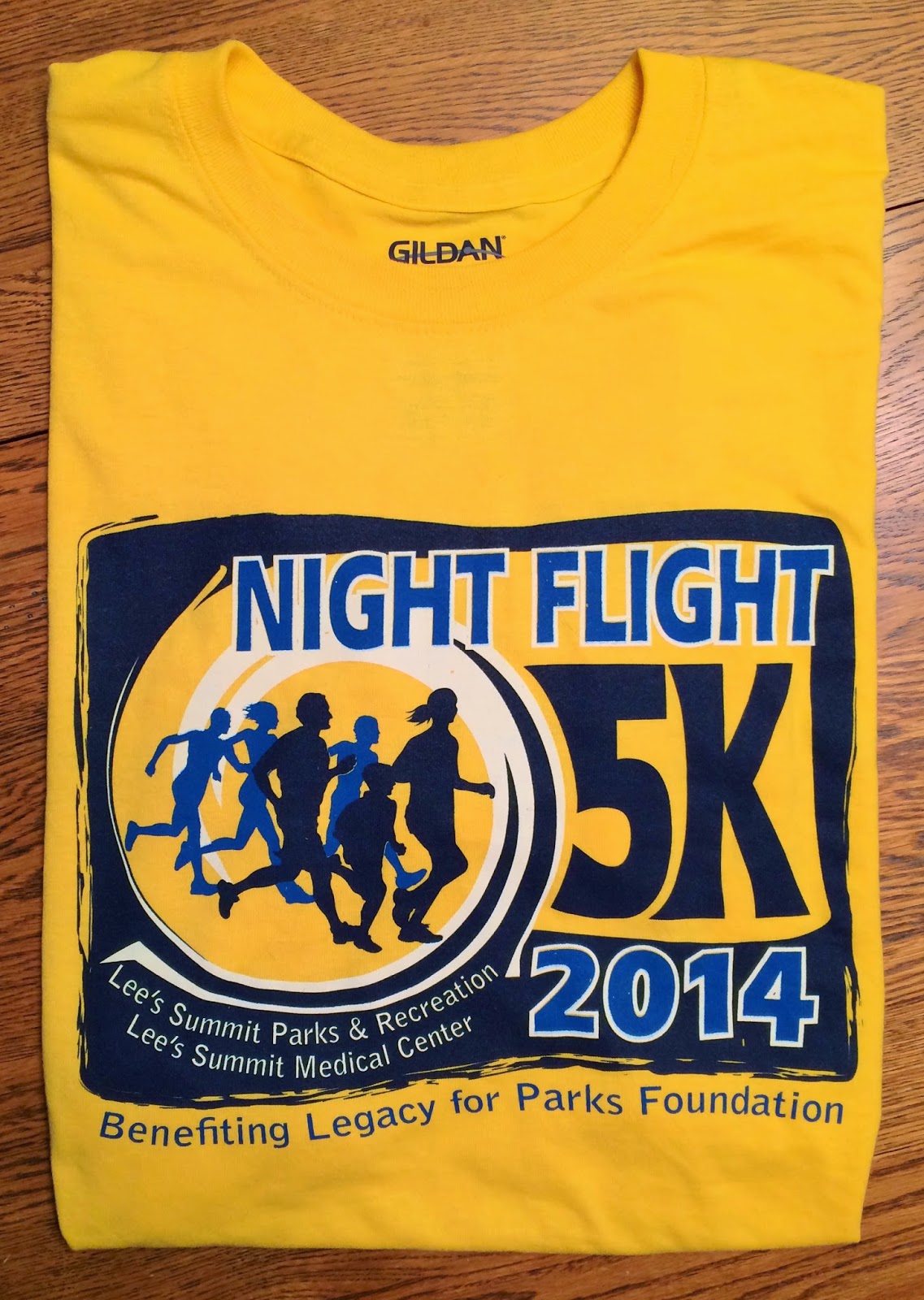 I typically don't "race" other people in races.  I just try to run my own plan and what happens, happens.  But when I'm near the front of a small event like this one, a little pride kicks in, and I start looking around and try to visually calculate the age of the runners who are near me.  Plain and simple ... I don't want anyone my age or older to finish in front of me.  And as we made our way to the final .75 miles, a gradual uphill climb to the finish, I saw another guy who looked to be in his 40's ... and he was gaining ground pretty quickly on me.

I never once looked at my Garmin during this stretch, because I didn't want to know how fast or slow I was moving.  But I felt like I was slowing down, because in the final quarter mile, the guy caught me and passed me.  I was now in 6th place.  I had enough energy to stay about 10 feet behind him until the final 100 yards.  At that point, I found an extra gear for a final kick.  As we approached the finish line, both of us started to sprint, but I flew by him like he was standing still.  As I passed him, I actually grunted with each stride ... somewhat audibly ... as I exerted my final bit of energy. (Pathetic ... I know.  Two grown men racing to the finish in a small local 5K).  I crossed the finish line in 5th Place overall with an 18:57.  It was only the 4th time I'd been under 19 minutes, and I couldn't have been happier with the result!

The Incident
Something really weird happened immediately after the race at the finish line.  I congratulated the four younger guys in front of me (basically I wanted them to realize that they'd narrowly edged a 45 year old grandfather of two, ha), and then I turned to shake the hand of the guy closer to my age that I'd just sprinted past at the finish line.

I extended my hand, and said, "Good race!"
He pulled his hand away and said, "I heard what you said ... that's not competition, that's just lack of sportsmanship!"
Honestly confused, I answered, "What do you mean?"
He replied, "What you said as we were crossing the finish line, I heard you ... really classy!"
"Oh ...", I responded, "No, I was just 'grunting', probably a little louder than I should have - I wasn't saying anything to you at all, I'm so sorry if you took it like that"
To which he angrily replied, "No, I know what you said, and you know what you said!"
At this point, I turned toward him and looked him in the eye and explained, "Honestly friend, I would never trash talk or anything like that, I think you heard me 'grunting' in that final push - I am sincerely sorry if that offended you.  I would never say something to someone to offend them in a race - sincerely, I'm sorry if you took it that way!"
Dissuaded, he continued, "No, whatever ... you should be ashamed of yourself!" ... and turned to walk away.
Okay, at this point I'd apologized profusely for something I didn't do, and regretfully spouted, "Well ... train harder!", and walked to my car.

Now the first part of our conversation bugged me a little.  He'd basically thought he heard something he didn't.  And I probably could've lived with that.  But my cocky response to him really stuck with me and I wish I wouldn't have said it.  I should have been "bigger" than the situation, even though he wasn't going to accept my apology ... FOR SOMETHING I DIDN'T DO!  I stewed on it all the way to the car, where I retrieved a bottle of water and my phone.  As I made my way back to the finish line to the runners who were still finishing up, I saw the guy chatting with a few friends.  I politely tapped him on the arm and asked him if I could have a word with him.  He had obviously cooled off a little because before I could say anything he began apologizing and said that he was in the wrong.  I assured him again that I honestly hadn't "trashed talked" him, and apologized for my "train harder" comment.  He introduced himself and we chatted for a minute - and that was that.  I was glad the whole thing was behind us.

Summary
I went into the race without a great assessment of where I was in relation to foot speed.   I hadn't done that much speed training this year, and still need to lose quite a bit of weight before my marathon in September.  But a very positive result for me like an 18:57 at an after dark 5K, which historically I've never ran very fast, was literally the spark-plug my summer training needed.  It is really something I can build on on my way to hopefully fastest marathon ever in the Fall.  Plus, even though it was a small race, I was the fastest person over 40 who ran the event.  And, I avoided getting punched in the nose for something I didn't do.  So it was a really good evening in the neighborhood!
... be great today!
Posted by Jim ... 50after40 at 5:19 PM