5 Reasons I'm Getting Faster At 45

When most of your friends are runners or multi-sport athletes, you're exposed to a variety of training methodology, philosophies, and approaches.  But it seems like the overwhelming attitude regarding marathon training is "just get the miles in and hope for the best on race day".  And in my opinion, that's absolutely fine if your one and only goal is to cross the finish line and collect your medal.  That's a huge accomplishment in itself.

But often I talk with runners who are trying to improve their performance, but are frustrated because their same "tried and true" training methods they've used for years keep yielding the same results over and over.  For so long I fell into this same repetitive mentality every marathon training cycle.  And inevitably, after a hard fought 26.2, I left the race feeling like I had a much better finishing time in me that I somehow just needed to unlock.  And last year ... I think I finally found the key.

More than ever before, I focused on the idea of "If you're going to race differently - you must train differently". What I had been doing simply wasn't working, so I made a few changes.   Following are the five main reasons why over the past two years, at ages 44 & 45, I've set PR's in all four of the major races ... 5K (this past weekend), 10K, Half-Marathon, and twice in the Marathon dropping my time from 3:20, to 3:15, and finally to 3:10 last year at Richmond.  Like I've written a hundred times, I'm not a coach, certainly don't have all the answers, and in no way consider myself an expert.  But over the course of literally 10,000 miles the past few years, I've learned a lot about myself, and this is what works for me ...

1. Run at the projected race pace as much as possible ...  This is single biggest key to my faster races, and I'm very passionate about this point.  I've always believed that train faster = race faster, and was introduced to the teachings of Olympic marathon coach Renato Canova not long ago, who teaches this exact philosophy.  I wrote an expanded article on it here.  Basically, I believe that many training plans convince runners to train at too slowly to accomplish their race day goals.  It is completely unrealistic to complete all your long runs at a 9:00/pace and then expect to run a marathon at an 7:30/pace ... it's just asking too much of your body!  I've found that if I can introduce my legs the faster race day pace at shorter intervals early my training, and then gradually stretch out the distance over the course of the next several weeks, my legs don't "freak out" at this faster pace in a race.  For my specific goal this year, it would be completely unrealistic for me to attempt a 3-hour marathon this fall without building a base of miles with paces at or below the required 6:49/mile average I need on race day.  My body needs to learn what this pace feels like for extended periods of time.  So my plan is to dedicate many miles during my weekend long runs to 6:40-6:45/pace.  This exact approach worked for me at Chicago and Richmond last year, and hopefully it'll will be the formula for my first 3:00 marathon at the end of 2014.  Of course I don't run at the faster paces all the time.  It's important to mix in a few recovery days per week at the slower paces.  But simulating race pace more often in my runs has really helped me improve. 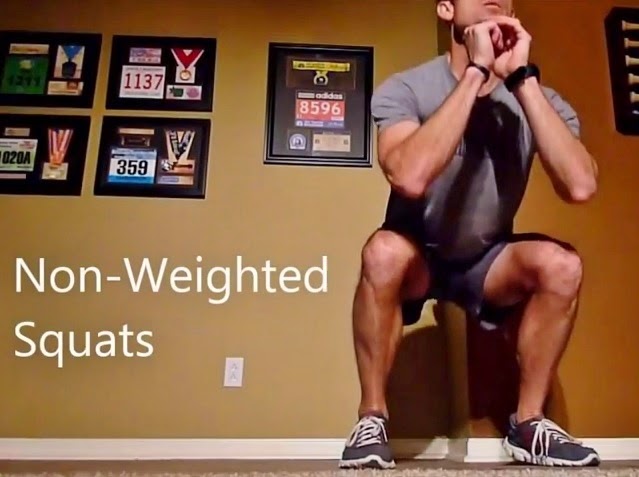 2. Strengthen my legs ... I do quite a bit of leg strengthening workouts, usually twice a week, about one hour each during my marathon training cycle. This year, I'm trying to increase my quad strength and emphasize more squats than ever before.  But of course, I work a lot on the hips and hamstrings as well.  You can watch my hip strengthening video here.  Strong legs keep me healthy during all the grueling training summer miles, and strengthening the smaller stabilizing muscles help when I'm fatigued late in a race.  The difficult balance for me is not burning too much energy on these ancillary workouts.  The strength work is important, but it often makes me a little too dead-legged the next day for my run.  I'm still tinkering with the timing during the week for this routine, but adding more and more strength to my legs has really helped lock down some faster times.

3. Eat a"runner" diet ... This is the single biggest thing I struggle with regarding training, but I try to focus specifically on foods that reduce inflammation.  Inflammation is one of the single biggest enemies for athletes.  It prevents the body from healing, and can drastically hinder our training.  Here's an article I wrote last year regarding anti-inflammatory foods as they relate to runners.  I try to avoid as much wheat and sugar as possible, but I LOVE bread, so that's a constant challenge for me.  But usually I fill my diet with blue berries, spinach, chicken, beat juice, quinoa, steel cut oats, red peppers, cinnamon, almonds, black beans, salmon, kale, coconut water, and eggs just to name a few.  I've found that I don't need near as much protein as I thought I did in the past.  Also, I try to eat spinach every day at at least one meal.  It's is an ongoing battle for me, but a good healthy "runner" diet helps keep my body fat at a minimum, and provides plenty of energy for high speed workouts.

4. Understand and value the importance of rest and recovery ... Like a lot of runners and athletes, I'm not good at resting and recovering.  I often fall into the trap of thinking "if you're not working out or running, you're going backwards", but that's just not true.  As an aging runner, rest and recovery is more important than ever.  Last year I dropped my weekly mileage a little, and also changed from running six days per week, to five.  Having an additional day where I wasn't pounding the pavement really
seemed to help keep me fresher as the race date approached.  If I want to add miles now, I'll usually run in the morning and evening - but I really try to not run at all on Monday and Friday.  It took some getting used to, but I found that if focused more on quality, and not just overall quantity, they extra day off and rest really were good things.

5. Race relaxed ... This was a big hurdle for me to overcome as well.  I used to get so tense and nervous before big races, but I've really learned to relax a lot more and not build them up so much in my mind.  The energy I wasted on pre-race nerves cost me a lot of minutes on the clock.  So last year I really spent a lot of time focusing on the mental aspect of racing.  I learned to not make them bigger then are, and it really helped me run a lot more free and easy at the particular event.   I've shared this story before, but it bears repeating ... A while back while walking Jack, my wife, Michael, said "Look at race day this way ...  think about those times when you had a big speaking engagement and you stressed over it for days, and sometimes weeks in advance.  And then think about how relieved, and more importantly ... how PHYSICALLY EXHAUSTED you felt immediately after it was over.  That's the same thing you're doing to yourself before races.  You're literally wasting a TON of mental and even physical energy before the race even gets underway."  I took those words to heart and now have found a way to put the race in context, no matter how big it might seem.  The result has been much more relaxed races, with much better results.

So there are the five main difference makers in my running.  Of course I also maintain a consistent core workout, regularly mix in speed, hill, and tempo work, and wear performance enhancing shoes,  among other things.  But if you've been trying to improve and just can't seem to make any headway, you might give a couple of these ideas a shot.  Incorporating them into my training has made the last couple of years my fastest ever - and hopefully there's more where that came from.  Have a great week!
... be great today!