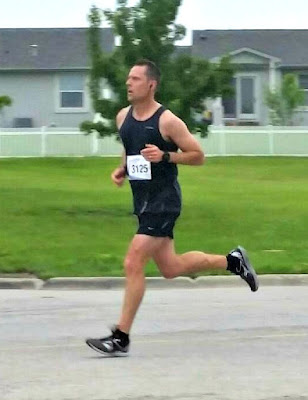 Whiteman Air Force Base in Knob Noster, MO is only 45 minutes from our home in Lee's Summit, MO.  It's the United States Military home for the Stealth B2 Bomber ... yes, the AWESOME war plane that looks like a bat.  Since we live so close, we've seen it fly directly over our house on training exercises several times in the past.  But we jumped at the opportunity to see it up close during a half-marathon race at Whiteman.  And needless to say, it was awesome!

With our race registrations, we had to submit Social Security numbers for a background seach.  It was presumably for checking for felony records since some military bases do not allow convicted felons withing the gates.  Since neither Michael or I had ever been charged with more than a traffic ticket, we were fine.

Packet pickup was held the two days prior to the race at the base, and also the morning of the race from 5:30-6:30 a.m.  Since we didn't want to make a 90 minute round trip drive to Knob Noster before the race, we opted for the race day pickup.  But with the 45 minute drive from our house, it meant waking up at about 3:15 a.m.

When we got to Whiteman, we had to pickup our pre-approved "Fast Pass" from the Visitor Center, and then after showing I.D. at the security gate, we were directed to a designated parking lot in front of Mission's End Club, a restaurant on the base.

From there, we were bused to the starting line, where we picked up our packets.  We had quite a bit of interaction during this period with the soldiers on base, and everyone of them were awesome.  They all addressed us as Sir or Ma'am, and were very helpful and knowledgeable.  But I couldn't help but notice just how young they were.  They were babies, fresh out of high school. 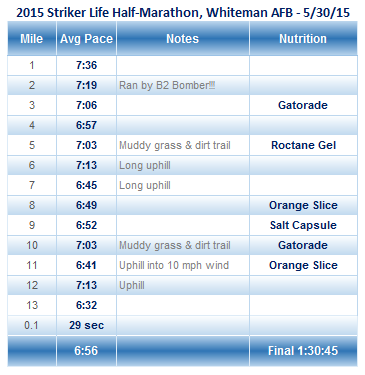 The organization during packet pickup wasn't the greatest, but not terrible.  The volunteers were doing the best they could, but even though it was a small race of about 300 total runners, there were a lot of packets to hand out.  After Michael and I got ours, we relaxed for a while, and then I got in a warm up mile to loosen up a little.

There was supposed to be a cool weather front coming through mid-morning, but when we started the race, it was about 65 degrees with 100% humidity.  Literally 100%.  It was incredibly foggy with little wind, and it was almost like breathing water.

I'd planned on trying to run this race at a fairly comfortable pace without pushing it too much.  To be honest, the only reason we'd signed up was to hopefully see the B2 Bomber up close, and also get an awesome 3-dimensional metal featuring it's likeness.  Other than that, I really didn't have high expectations.  I knew I wasn't in great shape, and plus, I'd let myself get about ten pounds over race weight.  So I just wanted to run "comfortably hard", and cross the finish line without aggravating my troublesome hip.  I figured if I could come in under 1:35 it would be a good day.

The race started about 15 minutes late, but it wasn't a huge deal.  Like I've written before, I think it's unacceptable to start a race late, but I wasn't gunning for a PR or anything so my warm up didn't have to be timed down to the last minute.  There was a runner carrying a 1:45 pace sign, but in the first mile, a large group of us separated from his group and began settling in to a comfortable pace.  The 100% humidity made it really tough to breath and at in the second mile, I commented to a group of runners that the humidity was making it a grind, to which they all agreed.

Also at mile two, we got our first glimpse of a real-life B2 Stealth Bomber sitting just outside a hanger.  It was AWESOME!!!  I'd seen them fly over several times from a distance, but we literally passed within about 50 yards of it.  Military technology is so amazing, and these babies are some of the best.  I really wanted to get a picture of one of them, but the base prohibited pictures during the race, which was kind of a bummer.  But just seeing it up close was a definite treat!

Small races are fun, but if they are of any length at all, one downside is that you're often running alone.  And after about the fourth mile, I'd separated with only about 3-4 runners within view in front of me.  The course was mostly paved streets and runway, but at about mile five, we ran through some grass and a hilly muddy field.  Though it broke my pace a little, it wasn't a huge deal, other than it was a bit unexpected, and my shoes got really muddy with about eight miles remaining.

After we got back on the pavement, the next five miles or so were spent on the military base tarmac.  It was literally a two mile straight stretch of military jet asphalt and concrete paved runway.  And if you'd guess that a military base runway had to be totally flat ... you'd be wrong.  There were a couple of long gradual climbs followed by a couple of long gradual downhills.  I was really surprised that the thing had any elevation to it all.  What wasn't surprising is how boring this stretch was.  I don't mean that disrespectfully at all, there simply just wasn't anything to look at.  I kept passing a few 10K walkers and two final half-marathoners during this stretch, but other than that, the only thing I saw was a half  mile of paved runway on the horizon in front of me.  The nice thing was that there were no turns during this stretch.  And even though I couldn't see the runner in front of me anymore, it was impossible to make a wrong turn ... which I've done in a couple of races.  The solitude and self-motivation made it feel very similar to a weekend training run.  I found it a little difficult to keep focused during this stretch, but overall I think I averaged a comfortable 6:50 pace before the home stretch where there were at least some buildings and right and left turns.

When I hit miles ten and eleven, I got a final view of the Stealth.  I remember thinking that it sat much higher off of the ground than I thought it would.  A grown man could easily walk underneath while it was parked.  Also, it was much bigger than I thought it would be.  Even though we were on a military base, it was a little surreal to be so close to it.  It was a wonderful distraction from my heavy breathing in those final miles.  But after another off-road trek on an even muddier and puddle filled trail, followed by a mile into the ever-increasing and temperature dropping wind, I was ready to be done.

I looked behind me a couple of times during this stretch to see how much space I'd put between myself and the last runner I'd last passed.  I still couldn't see the runner in front of me and knew I couldn't catch him, but the guy behind me was more than a half mile back, so I felt pretty good about my finishing position.  I was running fairly comfortably, without pushing the pace too much, and figured I would be close to 1:30-1:31.  Honestly, I couldn't believe I was running as well as I was without anyone there to challenge me.  For me, it's tough to stay motivated in a race like this when you're not really around other runners. Plus, the base prohibited spectators, so other than one or two volunteers at each water stop, there was literally no one around other than a few random military personnel going about their everyday routine.

I rounded the final corner with about 200 meters to the finish line and could see that the clock was still in the 1:30's, so I started to sprint to make sure I came in under 1:31.  The result ... 1:30:45.  I obviously didn't set any speed record with this one, but all things considered, it was a pretty solid race. Plus, since it was such a small race, it was good enough for seventh place overall, and second in my 40-49 Age Group.

Michael and I waited around after the race to meet up with our friend Christa, and also for the awards ceremony.  Even though it was the next to last day in May, the temperature kept dropping while the wind picked up.  We'd both brought jackets, but it started getting really chilly.  And after grabbing my second place plaque, we got back on the warm and wind-free bus and headed for home.

My overall thoughts on the race was that it was a unique experience to run on the base, and especially see the Stealth up close.  But I was kind of disappointed we didn't get to spend more time around it, or take any pictures.  But I completely understand from a security standpoint why they can't allow the access.  More than anything, it was a great reminder of the wonderful young men and women we have protecting us and providing us our amazing freedom.  We are so blessed to live in such a great country, and I know neither Michael or I ever take that for granted.  It was a great day being with the woman I love, and celebrating our freedom at the home of the B2 Stealth Bomber ... really awesome!
... Be Great Today!
Posted by Jim ... 50after40 at 8:16 PM