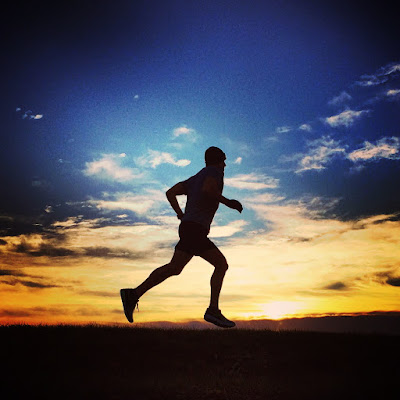 I typically don't race a lot in the Winter ... but I do run a lot.  A lot.  Like a lot of runners, I try to build a base for the rest of the year during the colder months when there's not much else to do anyway.

With my 10 mile recovery on Sunday, I totaled 254 miles ran for the month of January.  Quite a few, yes, but 19 times before I've ran more in one month.  Still, it felt good to bulk some mileage again and hopefully get stronger for Spring races.

But the problem with so many miles is the minor aches and pains that often accompany them.  I've been blessed that I've  never had to deal with a serious running injury, but during the Winter months it just seems like everything gets weaker, tighter, and more susceptible to damage.

The issue that I've been dealing with this year ... for the first time ever ... is some left heel pain.  It's mostly from tight calf muscles, which is most often related to weak & tight hips.  I just can't shake it, and I'll probably get ART treatment for it this week.  It's mostly just really annoying.  I mean it really hasn't affect my runs too much.  But I know if I don't have it taken care of, it can be a problem for quite a while.  So hopefully a visit or two to doctor Wisner will make things better.  I've been stretching my calves more than ever, which I'm not sure is really helping ... and often after visiting Jared, I find one simple movement that helps drastically.  But all in all, it really hasn't prevented me from keeping my schedule and pace for the most part.

Hopefully I'll remain healthy throughout the remaining days of Winter.  And hopefully building a strong base will help with faster races in the Spring.
Posted by Jim ... 50after40 at 11:12 AM