Here's a little known fact.  If you stuff your body with junk food for three months, gain 15 lbs, and don't train as much as you should ... your finishing time for any foot race you decide to run will be much slower than normal.  I proved it on Sunday!

Michael and I ran another half marathon this past weekend ... only because it had been scheduled for a while.  And the results were not great.  But do I care ... nope.  I've turned the page on the worst winter and spring I've had in a while and it's full speed ahead, baby!

Because it was a small inaugural race of about 650 people, I actually won my age group, which I felt a little sheepish about considering it was my second slowest time ever of 1:39:48.  Man, I just couldn't make my legs turn over. 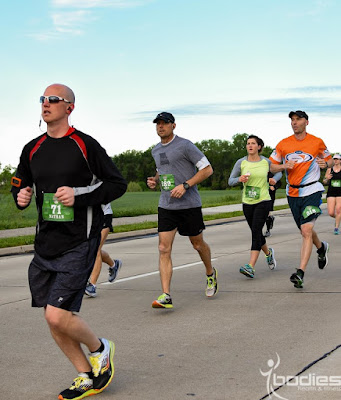 And yes friend, there are some who have said to me "I would love to run a sub 1:40".  I understand, and don't in any way mean to belittle anyone else's time.  But it was just much slower than what I've done in the past.  I've preached this A THOUSAND times ... but I believe we're all just stamped genetically with a time range. I'm never gonna be a 5:15/pace marathoner ... and some are never gonna be a 9:00/pace ... it's just the way we're made. The finishing time really doesn't matter.  Heck ... there were a TON of folks in that race who deserved a medal much more than I did on Sunday.  It's just a point of reference, that's all.  Frankly I get tired of defending the position just because some of us are born with a little more natural speed than others ... which I had to do again after the race on Sunday.  It's like some want to make you feel bad about your time.  I mean, I couldn't care less about another's time ... why is the fact that my time is faster such an issue.  I NEVER volunteer the time unless I'm asked specifically.  Anyway ... that's a much deeper topic for another day.

We had a good time catching up with friends we hadn't seen in a while. And after the race I felt pretty good as far as health, and hopefully it will continue to get me on the right track.  Later that night, while sitting in the movie Jungle Book ... WHICH IS AWESOME ... I didn't notice any weird pain, and I've even ran a couple of times since.  And more than anything, I'm thankful for the ability to even run 13 miles after the spring I've had, and enjoyed getting out there with everyone for a nice day.  The point is ... the slower than normal times this spring aren't a big deal to me.  I'm back on the wagon now and hopefully I'll get some of this weight off and get back to running consistently again soon.  Hope your training is going well!  Have a great week!
- Jim Weatherly
Posted by Jim ... 50after40 at 3:37 PM