Missoula Marathon
July 10, 2011
Missoula, Montana
12th Marathon Completed
Official Time: 3:22:32
Avg Pace: 7:44
Avg HR: 165
Finish: Overall 98 out of 1,000 (top 10%), 40-44 Age Group 13 out of 82 (top 16%)
Weather: 60 degrees, 62% humidity, 3mph wind
Comments: Great run overall, 3rd fastest marathon to date ... no soreness/tightness afterwards
Garmin Connect Link:  http://connect.garmin.com/activity/98787663
Overview
I went into this race with no particular pace plan or strategy, but rather just wanted to have fun and enjoy the beauty of Montana.  And I did just that!  However, even though the idea was just to run a smooth, somewhat "slower race" ... similar to the Austin  Livestrong Marathon ... I found myself running fairly fast (for me anyway) at about mile 16 and decided to push it a little.  I didn't PR, but this was one of the more enjoyable races I have ran to date with NO real stress on my body.  Coming away from it, I really feel like I'm probably in better shape than ever based on my finishing time and the way I felt the few days after the race!

Race Weight, Nutrition, & Conditioning
I was 176 lbs for this race, which is a little thin for "walking around", but felt good running.  But I felt really strong at the starting line.  My ab work leading up to the race had been pretty good and I felt like I had a strong core.  My morning core work had been 100 crunches, 6:00 total planks (2 on each side & center), and 2 x 30 reps of push ups ... 5 days a week before my runs.  Also, I had been able to incorporate fairly consistent two or three evenings per week at the gym where I would do additional ab work and light upper body work.  But usually at the gym I focused primarily on full leg workouts.  The result was strong healthy legs that weren't overcome by the typical post race soreness.  A few days after the run, I was a little tight in my left calf, but that was it ... which was an awesome feeling!

My diet had been fairly decent leading up to the race too.  Like most people, I eat a little less in the summer.  I think I was probably only getting about 2,500 calories per day which is a little low, but I always seemed to have enough energy for workouts.  I also had made the decision to eat WAY LESS CARBS for this race to avoid the late-marathon stomach issues.  In previous marathons, around mile 22 and beyond, if my heart rate went above 180bpm, I seem to get really bad stomach cramping.  It's so bad in some races that it makes me stop and walk to avoid becoming one of those horrible internet race photos featuring a "bad accident".  Eating less carbs seemed to do the trick.  My stomach cramped a little at Missoula around mile 24, but not near much as normal.  I think I'll go even less carbs for the next race.

Pre-Race
Missuola's 5am starting area was perfect.  It was 45 degrees, about 60% humidity, and 3mph winds.  Much better than the 75-80 degrees & 90% I had been training in.  I kept a long sleeve shirt and jacket on until about 5 minutes before the race and even got a little chilly at that.  The gear bag boxes were literally about 10 ft from the 6am starting line, which was great.

About 2 hours before the race I took my typical 2 ibuprofen.  I hope to ween myself off of this, but the last few races it has really seemed to help with leg soreness late in the race and later in the day.  About 30 minutes before the race I downed the usual PowerBar carb bar and a Vivarin for a caffeine blast.  Vivarin is not something I would recommend, but it seems to work for me ... probably more psycological at this point.

Race & Pace
The elevation for Missoula was about 3,200 ft which didn't seem to phase me. (Actually, I don't think most people begin to notice much elevation heart rate change until about 5,000 ft) But during the first two miles, I noticed my heart rate start to hit 210 bpm, which is WAY over my max heart rate - but never felt like I was working that hard.  So I think my Garmin was most likely picking up other heart rate monitors from people who were running close to me.  My overall heart rate was 165 bpm for the 26.2, which is about average for a marathon.  I would like to get to where I can bump the average up a little, thus running a little faster, but for now it's fine.

Even though the race was mostly uphill, there were no significant elevation increases until about miles 12-15, where we climbed a very manageable 190 ft, with most it of coming at mile 14 with 131 ft.  The rest of the course was a very slight up-hill, but mostly flat.  The big thing I noticed was that there weren't any down-hills other than at mile 16.  It would have been nice to get a couple long downhills to gain both time and energy back, but overall the course was fairly easy.

Usually when the mile markers seem a little off, I blame it not running the tangets effectively.  But for this race, I think they were definitely off a little.  My Garmin measured a few miles at 1.2, but others at .9 and .87 ... which didn't really seem right.  I mean, I think I stayed on the course the whole time, but maybe I cut it short ... but not .1 or .13 short.  The final tally for the race was 26.23.  So regardless of the mis-marked miles, it still ended up okay.

After running several marathons and about 70  miles per week, I have a pretty good idea now days where my splits should be without writing them down.  Typically during a marathon, I carry a mileage split chart with me so I know where my pace should be at any point in the race. It's kind of my security blanket.  But I didn't carry one for this run.  I decided that I wasn't going to PR, so I would just "stay close" to my typical splits, but with no pressure to be at certain times at certain miles.  It made the marathon much more relaxing and seemed to work okay.  I even stopped for about 50 seconds to pee at mile 5 and didn't worry about making up the time later in the race, which was nice!

I have "mental check points" for myself during a marathon at miles 8, 14, 18, & 22.  At these miles I do a "mental" evaluation to determine how I'm feeling and how my body is responding.  I really felt great at each "check point" at Missoula.  Part of it was the amazing weather ... but also I felt really good about my conditioning.  After I get to mile 22 I just "gut it out" for the last 4 miles.  The last 4 mile stretch can get a little long, so I'm thinking about changing to mile 23 for my final check.  Focusing on 3 miles at the end of the race is better than 4. 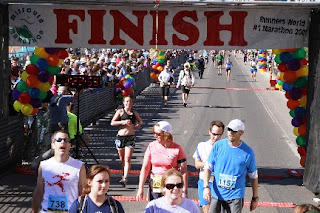 I think if I would have prepared a little better and focused a lot more on this race, it would have been an "easy" PR.  Even though I was running fairly consistent and really strong ... it seemed like I was just kinda screwin' around the first 15 miles.  At about mile 16 I looked at my pace and thought I had a chance to PR if I pushed it a little.  For the 6 miles from 16 to 22 I averaged a 7:19 mile, with my heart rate climbing from about 165 to 177.  I kept pushing it, but I knew the record time was slipping slowly out of reach - I had started a little too slow for a PR today. At about mile 24 I figured I had to run a couple of 7:00 miles to come close to PR and I'm not even sure that would do it.  I began to push it a little doing the marathon pace math in my head.  I ran mile 25 in 7:37 which wasn't near fast enough for a PR, so I slowed down and ran the last mile at 7:53 just enjoying the finish!

Summary
I think I'll probably run faster races later this year, but Missoula was unbelievably satisfying.  The finish time was respectable.  The course was easy.  And best of all, my legs felt amazing the following week.  Usually I'm a little sore for a couple of days depending on how hard I push myself.  But I'm really happy with my physical progress, and that I'm getting in good enough shape to run a 3:22 marathon ... and then run 33 miles the following week with absolutely no pain. I think this is probably the strongest my legs have ever been at this point.  Missoula was a great race and great experience!  Every race won't be a PR, but I have no complaints with this one ... mission accomplished!
...be great today!
Posted by Jim ... 50after40 at 10:46 AM