Finisher Medal
Little Rock, Arkansas
Forget all the jokes you've heard about Arkansas.  "No Shoes" ... "Echoing banjo's through the pine trees down by the river" ... "Squealin' hogs everywhere".  I grew up in neighboring Missouri and have always know that they don't call Arkansas "The Natural State" for nothing.  It is beautiful!!!  But while being raised only a few hours to the North, I had never visited Little Rock, the capital city of Arkansas.  It is an amazing city.
Little Rock is really a big "River Town", nestled on the South banks of the Arkansas River.  As you come in from the North at night, you see the city lit up and reflecting off of the water.  Most of the downtown entertainment district is located directly adjacent to the river as well.  The State Capital building is also nearby as well as the Bill Clinton Library.  The people were also very friendly and it was extremely easy to get around.  There were a ton of shops and restaurants within walking distance of our hotel.  And while I had never been to Little Rock before, I would definitely go back just as a destination on its own.

Marathon Training & The Flu
Up to this point, I had only ran one half-marathon, and a handful of 5K's.  So I researched quite a bit to find out what training plan to use.  I went with RunnersWorld.com and their cumulative plan from many experts.  I trained for about four months using their plan diligently.  The plan was fine, but I never felt like the long runs were long enough.  I think I only had 3 twenty miles runs and a couple 18 miles runs.  Once I hit twenty on race day, I kind of mentally freaked out since I had never been that far before.  But physically I think I was fine, and the training plan was probably appropriate.  Overall, I found training for my first marathon to be fairly easy and enjoyable, but there were some external factors that played a big part during the run.

The week of the marathon I had business in Wichita, KS.  On the Monday before the race, I came down with flu-like symptoms.  It only got worse as the week continued.  On Tuesday I vomited about 7 or 8 times and had a throbbing headache.  I was devastated.  Along with feeling horrible, I knew a good finishing time, and possibly a even finish at all in my first marathon were going to be difficult.  How could I run the longest race of my life if I wasn't in top physical condition. As the week progressed, I still felt pretty bad, but we went ahead and made the trip to Little Rock.  I felt pretty sick until the day of the race when adrenaline kicked in and I felt a lot better.  But I was really dehydrated and felt pretty weak from being sick the days prior.

I'm sure getting sick was just one in the long line of "rookie mistakes" I made when preparing for the race.  The immune system is more vulnerable during taper and I didn't change my diet to compensate.  Also, in all races since then, I've started pumping Vitamin C the week of a race so I don't go through that again.  I also pumped a lot of medicine into my system that week before the marathon.  I have no doubt that it helped in dehydrating me quite a bit.  So I've also tried to limit what I take before a marathon.

My First Marathon Race Day
Michael and I stayed in the Hampton in downtown which was located only about 3 blocks from the starting line.  It was awesome.  Everything was so close!  I of course, tossed and turned all night with anticipation about what the next day would bring.  I was obviously anxious about the race, but probably more than anything weighing on my mind was how sick I had been all week.  I felt weak and really light headed.  But I rolled out of bed about 3:30 ready to face whatever the day might bring.

Quietly (so I didn't wake Michael) I threw on some clothes and decided to walk down to the finish line, where hopefully I would be crossing in a few hours.  The weather was perfect - about 50 degrees with no wind at all!  As I neared the vacant finish corals and empty stands, I imagined myself crossing the finish line and how great it was going to feel to call myself a "Marathoner"!  It wasn't completely dark out, but by that point there was kind of a pre-dawn dimly lit sky.  Just enough that I couldn't see very well.  As I started to walk back to the hotel, I slammed straight into a knee-high landscaping rock.  I knocked me to the ground and I saw stars, said a few choice words, and began hopping around on the other leg.  I had blasted my right shin on the rock and when I looked down, I was bleeding and a knot was immediately beginning to form.  It was bad enough that it made me limp around for while, but the blood looked worse than it was.  It was really just a little scrape ... but it hurt like a Banshee!!!  So now, along with being sick all week, I began worrying about the gimpy leg.  I limped back to the room and threw some ice on it and waited until time for the race.

To calm my nerves I started rubbing the black bracelet that my daughter, Madi, had made for me for good luck.  I also rubbed the temporary tattoo my son had inking on my inner arm that read "HERO!"  It really seemed to calm me down until out of nowhere ... BANG!!!  The race began.

A weird thing happened when we started running.  I seemed to lose all nervousness and the sickness from the prior week seemed to fade away.  I was caught up.  Adrenaline was racing.  Unfortunately so was I.  I made another huge rookie mistake in the first few miles.  At the 1 mile marker I looked down and I had ran a 7:03 mile ... MILE ONE!!!  That was waaaaaay too fast.  So I slowed my pace as much as I could, but I felt like I was crawling.  At mile two ... 7:35.  Still way over my planned pace and I knew I had to slow a little more.  Fortunately I was able to slow down a little, but still ran the first half of the race, which was really flat, at about a 7:45 pace.  I felt smooth.  I felt fast. And I felt like I had plenty of energy ... that is until I hit the hills in the second half.

After you cross the half-way point, you being a fairly quick climb of about 175 feet through a nice tree lined neighborhood North of town that overlooks the Arkansas River.   I had done quite a bit of hill training, but I wasn't ready for these hills.  They were longer and tougher than anything I had trained on.  And I had spent a lot of energy thinking I was a Kenyan on the first half.  And I could really feel myself beginning to wear down a little.  But I fought through the hills and made it down the steep back side, burning up quads a little, until I came to mile 18 where a six mile out-and-back along Riverfront Drive began. 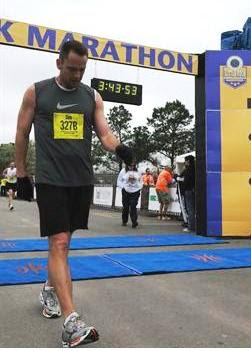 I had never ran an out-and-back in a race before.  And for some reason, this one freaked me out a little.  I was really starting to hurt a mile 18 but wasn't going to quit.  I know my face was starting to show signs of fatigue, but as I looked at the faces of the runners coming toward me at about mile 22, their faces were relaxed and stress-free.  "Man, I'm in trouble", I thought to myself.  I felt like crap and these people who were miles in front of me were cruising.   I looked at my lap counter on my Casio watch and it counted lap 20 ... lap 21 ... lap 22.  I had never been above 20 and it looked a little surreal to see these numbers on the screen face.  I was really beginning to wish that I had ran further in my training runs.  After all the marathons I've ran, for some reason that out-and-back stretch remains one of the toughest I've ever been on.

I made it out of the out-and-back around mile 23, but really had very little gas left in the tank.  I pushed as far into mile 23 as I could, but finally had to walk a little.  My pace had slowed way down and a ton of fatigue had set in.  I started rubbing my good luck charms again and praying a lot.  I was thinking about my family and how I couldn't let them down.  My time was not going to anywhere near where I had planned, but I was going to finish!  Slowly through the remainder of mile 23 and 24, 25, and 26 I ran the down hills, but walked the up hills.  And as I hit the .2 of the race I knew I was gonna make it. 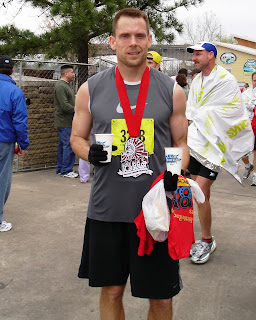 As I crossed the finish line I was overcome by emotion.  I began looking for Michael and holding back tears of leg pain and completion joy.  When I finally got to her I began sobbing.  She asked me if I was okay ... like physically ... and I told her I was fine.  I have no idea why I cried like a baby, but I was so relieved to have this goal accomplished that I had worked so hard for and I couldn't believe that it was over.  My time in first marathon was 3:43:45 ... nothing to brag about, but it was a great accomplishment for me!  We gathered some recovery snacks and headed back to the room.

Early the next morning, as I hobbled down to the kitchen of my hotel, I met a 65 year old man who had just completed his 100th marathon at Little Rock.  It was pretty humbling.  He was up hopping around the kitchen like an 18 year old and I was stiff-legged and barely moving.  I sat and talked to him about his experiences with running.  Up until that point, I thought that most people only ran one or two marathons a year.  He told me he ran one every three weeks.  He was amazing and truly an inspiration.  After our conversation, even though my legs were killing me, I thought, "If this guy can do it ... I can too!"  And that's kind of what got me into running several marathons each year.  He was a real inspiration.

I wasn't the only one who got more of the marathon bug at Little Rock.  Michael told me on the way back to Kansas City that watching the runners cross the finish line made her want to do a race.  And on that day, I think a competitive fire was stoked in her that has made her pursue races and triathlons ever since.  I was really sore the next few days, but the pain was eased somewhat by knowing that even if I never ran another one ... I was now a marathoner!  And it was  a pretty good feeling!
... be great today!
Posted by Jim ... 50after40 at 6:52 PM