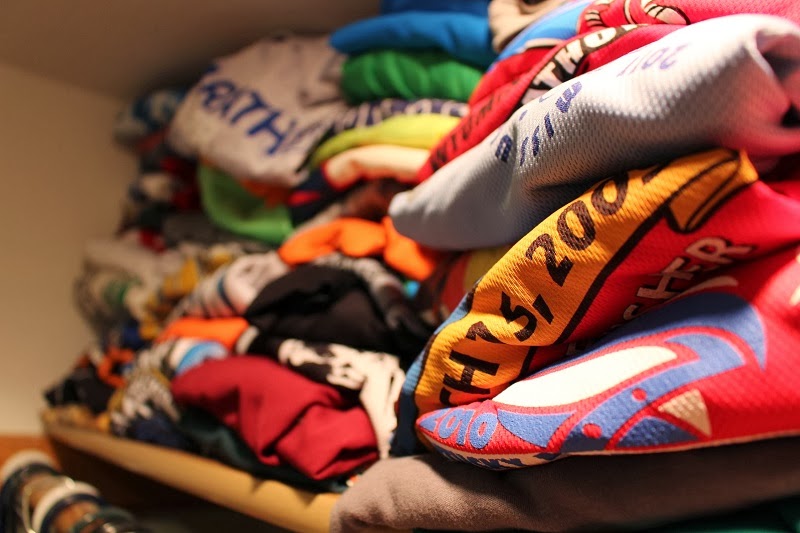 Like all of you, I have a ton of old race shirts just lying around (or is it laying ... it's a grammatical mystery to me).  And it's not just the actual race shirt ... sometimes there's a race t-shirt that accompanies said race shirt.  And then, if you actually spend money on another shirt at the race expo, which I inexplicably sometimes do ... you can end up with three or more shirts from the same event!  Huh???  A little excessive ... ya think!

Now I'm not really a big, "Hey everybody ... look at what I achieved ... look ... look ... it says so right here on this t-shirt with a giant logo!" kinda guy.  I mean, I hardly ever even wear my Boston Marathon jacket.  But in truth that's partly because mine was an ugly year - black and green.  Plus, I have THE ONE year where the patch on the back is not an embroidered patch ... it's a lousy cheap silk-screen.  I know ... oh boy, Jim's problems!  Nor do I have a 26.point.anything sticker on my car.  If the other motorists aren't aware that I've completed several marathons, I'll still make it to work.  But on the other hand, when you make running a major part of your life, race shirts are about the only thing you own.  So if you see me, I'll probably be in some sort of SWAG from a race.

In fact, the top shelf of the tiny square foot of closet space my wife has allotted me is a like an ancient burial ground of races of yesteryear.  There are so many memories there, stacked up, waiting to be worn proudly ... but sadly, most never see the light of day.  There are, however, a few race shirts that make it to the front of the rotation.  They're what I call my LOSER RACE SHIRTS!

My loser race shirts are the ones where I failed miserably.  The threads from races where I thought I was gonna be "bout it" (I think that's how my kids say it) ... but I ended up broken, beat down, and in most cases pissed.  They're the ones that remind me to run an extra mile, to do the extra core work, to pace myself a little faster.  They're the races that taught me not to get too full of myself ... and the ones that simply say, "Hey dummy ... ya wanna go through this pain at the finish line again???"

I know it's probably not the healthiest thing in the world to be motivated by anger, or the fear of failure, or other's doubting you ... but a lot of great athletes are driven by those exact variables.  And while I'm absolutely not a great athlete, I certainly let negative thoughts fill my head to push me harder and harder during training.  (I try to keep it in the "marathon box" ... don't wanna carry around negative energy.)  Heck once, one of Michael's co-workers told her I would "NEVER qualify for the Boston Marathon" running races as often as I did.  I let his words ring in my ears every day for 9 months ... EVERY DAY ... I'm not joking ... before I qualified the first time!!!  And every time I qualify again, his stupid voice is in the back of head.  I so badly wanna find him and tell him that I'm on #6 and counting.  But that would be pathetic.  And I may be small ... but I'm not pathetic.

The point is, sometimes I use petty little negative reminders to drive me.  And I make it a point to wear shirts from races where my performance was horrible.   And by far, the single most often worn race shirt in my collection ... the 2012 Wichita Prairie Fire Marathon.  Ya'll remember good ol' "Project 3:09" don'tcha!  I do.  I think about it all the time.  I really thought I was going to run sub 3:09 that fall, but failed miserably.  The good thing is, I learned a lot of lessons that I still utilize from that race.  Mostly ... "don't build up nervous energy before you get to the starting line".  Or said another way ... RELAX!!!  But the shirt serves as a constant reminder that I'm nowhere near my running speed goals yet.  And every time I feel like letting up in training ... I put it on, and stare down at the rabbit.  That sounded weird ... but you know what I mean.

So anyway ... do any of you have silly motivational gimmicks like this?  I'd love to hear about 'em.  It might even give me some new training ideas.  Now mind you, I wear some of the shirts where I ran well too ... but that would be a pretty arrogant blog post, don't ya know.  But suffice to say, I wear my failures on my sleeve a lot more than my successes.  Not as a way to wallow in defeat, only as a means of hopefully getting better.
... be great today!
Posted by Jim ... 50after40 at 7:54 PM