I try to be positive most of the time ... at least on my blog.  But today I'd thought I'd jot down a few things that have entered my life lately that just need to stop ...

2.  Presidents who assume we're all idiots  Regardless of political party, they all try to convince me during the State Of The Union Address that things are better right this minute than ever before in the history of the world.  Look around bro.  At least last night I was treated to ol' Crazy Uncle Joe Biden pointing, laughing, and making faces at people.  That dude cracks me up.  Well played Crazy Uncle Joe, well played.

3. Every race I run having a disclaimer about headphones  Whether you're pro or con headphones while running, if I'm going to be attempting to run 26 miles in your city without croaking ... HEADPHONES are the most important thing you have to warn me about?  How about, "Hey dummy, better make sure you're in shape for this!" ... Or, "Watch out for gnomes!"

4. Shoe companies playing follow the leader  In case you haven't noticed, the whole minimalist thing is slowly fading away (just like good ol' Jim predicted way back in June of 2012 - here) And what bugs me, is of course all of the shoes companies are now building bigger bulkier shoes ... coincidentally at the same time!  I thought the flat shoes that pound the bottoms of your feet when you run were gonna save the world?  I thought it was making us all run more like our ancestors?  What the ... I've been duped!  It's like there's not a single ounce of originality among these folks.  All they do is wait for one company to try something, and then copy the idea to jump on the gravy train ... regardless if it's good for your foot, or running.

5. The media and Richard Sherman The only reason Richard Sherman remains in the media spotlight is because he's a trash-talking African American with long braids.  It's an attempt by the media to exploit what is a perceived stereotype by some, and they know it will get a reaction from a few ignorant white people ... and maybe create this big social debate.  Big deal, the guy talked a little smack after a game in which he made an incredible play, where he'd been jawing back and forth with the other player all day.  Athletes, myself included when I was younger, have done that since the beginning of time.  But the media will put him front and center on every news telecast because he looks like what a lot of the country "thinks" a pothead looks like.  It's dumb.  I don't care what Richard Sherman, or any other athlete or entertainer has to say about social issues.  I just wanna see them crash into another individual at a high rate of speed.  And if they talk trash after they do it, it doesn't affect me any way. 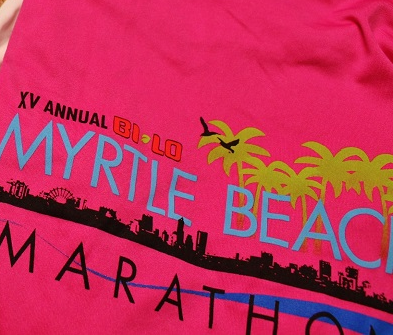 6. Feminine colored shirts in my race bag
As a skinny, frail, probably not the "manliest of men" runner, I have to deal with the jokes occasionally at work ...

"Hey, are there any guys who run those races", "Why are you doing that, I thought running was just a post-baby weight loss plan", "Are those actually your arms?"

So would it be too much to ask for a somewhat more MANLY color for some race shirts.  This is the shirt from the Myrtle Beach Marathon a few years ago.  I'm not joking.  And the one from Richmond last year is bright, bright, bright orange.  I'd show you a picture, but I'm sure you can see it from where you're at.   C'mon man, I don't need any help being labeled as feminine.  A nice camouflage, black, brown, or gray would be nice.  Anything boring and dreary.

7. Vin Diesel Dancing  The very first thing I saw on my "news" feed this morning was a video of some bald-headed actor named Vin Diesel Dancing.  Wow ... you  mean an "entertainer" was doing something crazy and wacky on the internet???  Stop the presses!!!  And now, I've seen it like 57 times since.  Did he cure cancer?  Did he serve as a teacher?  Did he rush into a burning building, or stop a mugging?  Did he simply get up and go to work everyday at 7am, work til' 5pm, then come home and take care of a family?  Nope, nope, nope, nope, and nope!  STOP IDOLIZING THESE IDIOTS JUST BECAUSE THEY'RE IN THE MOVIES!!!!  Vin Diesel dancing to some crappy pop song is not funny, entertaining, interesting, or news-worthy in any way.