Spring "A" Race In Serious Jeopardy 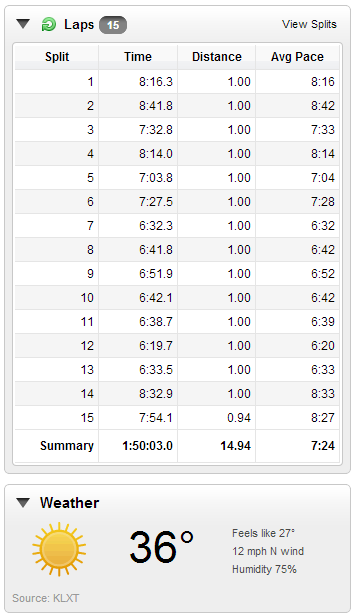 Like most bloggers, I try to be fairly transparent and communicate what I'm really feeling leading up to races.  If you've read for a while, you know I can be a little "confident" before a big run, but I also try to be completely forthcoming when my performance at an event is in doubt.  The upcoming Garmin Half Marathon, my Spring "A" race, would fall into the latter of those two.  With everything going on during this training cycle, I just don't think I'm probably gonna hit my goal times.

I'm still getting over this stupid bronchitis or whatever, and coughing for most of the day.  Plus, now the pollen level is sky-rocketing in Lee's Summit, so I've been battling that as well.  Mix in the non-cooperative weather for this time of year, and I'm just not getting the quality workouts I need before a run like this.

This morning's run was fairly good indicator of where I'm at right now.  At first glance, the paces look decent - about 6:40 average over 9 miles.  The problem is, I stopped about 4 times during that stretch for water and to take a gel.  I really don't think I could have held that pace without stopping.  And for this race, I actually wanted to be averaging about 6:25 for 9 miles in a run like this.  So I really feel like I'm behind schedule.

The Garmin Half Marathon is on April 26 ... exactly four weeks from today ... and I've still got A LOT of work to do.  For a race like this, I would really like to be peaking next week, but that's not gonna happen.  Now that I'm off of my prescribed drugs, I think I'll have three good weeks of workouts, and then take a really laid-back rest week before the run.  I think I can still build some fitness in those three weeks, but it's just not where I wanted to be.

I'm definitely not "throwing in the towel" on this one.  There are a lot of things I can accomplish at Garmin despite all of the setbacks.  This training has been a good springboard into the summer training.  The race will be a blast since it's here in Kansas City,  And plus, I'd still like to win my Age Group for the first time in the new 45-49 Old Man Division, and I think I've got a somewhat realistic shot at that based on previous year's times.  But the 1:25 personal best I'd targeted last year for this race is 100% out of the question.  But we'll see what happens otherwise.  Have a great weekend!
... be great today!
Posted by Jim ... 50after40 at 11:58 AM