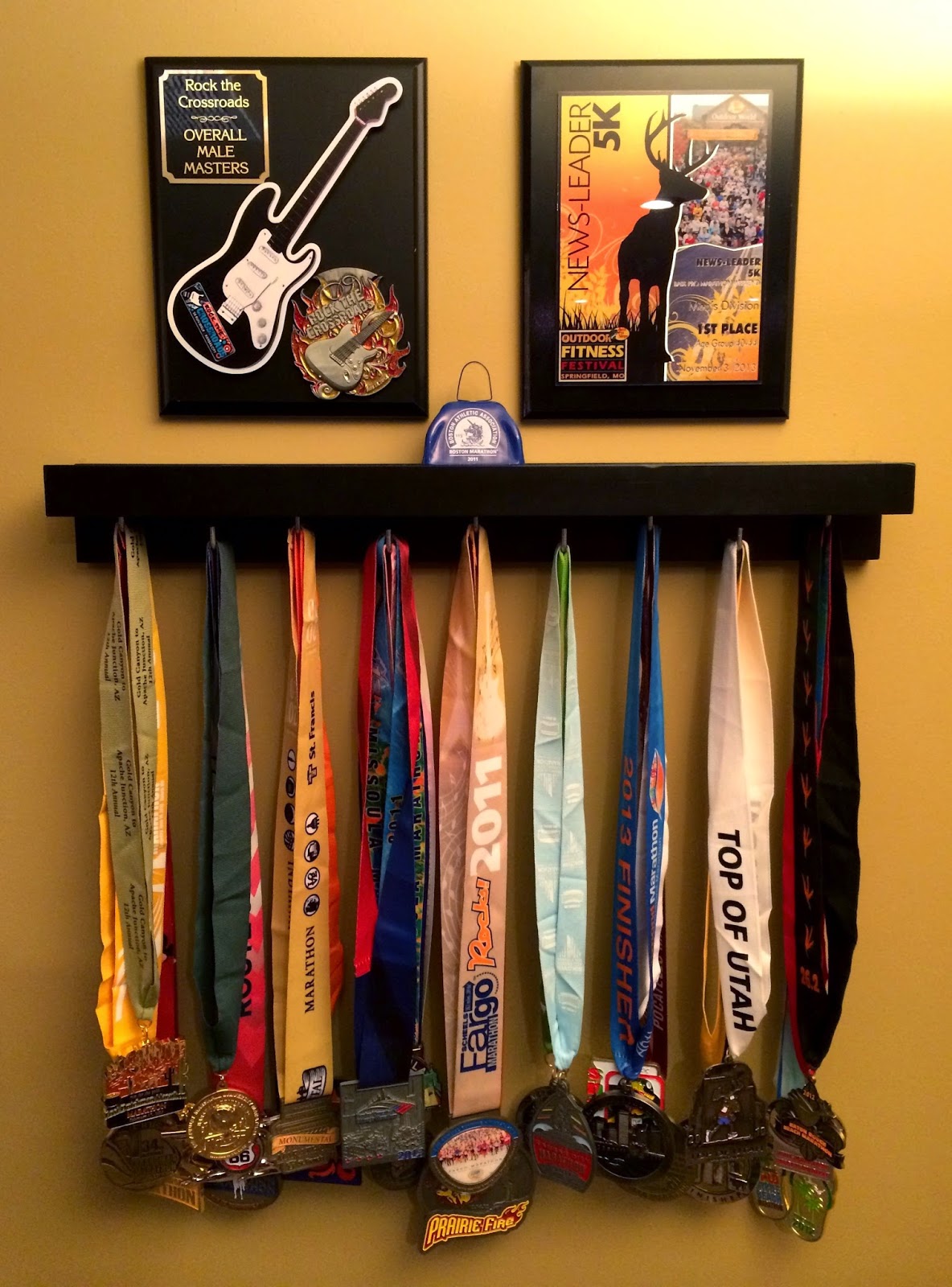 Most people would probably view me as outgoing, personable, obviously oozing with side-splitting hilarity, ya know - just down right gregarious.  But those who know me best know that I'm most comfortable being alone, a little standoffish, and definitely enjoy the challenge of doing almost everything myself.  It's not that I can't work with others, but I would prefer to NEVER ask for someone's help.

My basement (man cave) is the prime example.  I did it all by myself ... and I mean all of it.  I built the cabinets, casing, mantle ... built and finished all of the woodwork.  I designed and built the 100 autographed baseball case ... and the coffee table in the middle of the room.  I matted and framed all of the medals, signed jerseys, footballs, and photos.  I even shot almost all of the photos. I wired it for electricity ... and ran the sound system.  Pretty much everything.

And recently I'd been looking for a way to display my marathon medals.  I'd seen several ideas and had decided to go with the "hanging" method, but didn't want to pay $50-75 for a professionally made medal hanger.  So, of course, today I simply made one myself.  It was really easy and only cost about $18, but you could probably do it for a little less than that.

I just found a small 24" plain black wall shelf.  I got this one at Hobby Lobby.  I think it was Hobby Lobby anyways ... it was one of those predominantly female patronized craft stores that, as a dude, you feel a little creepy roaming around in ... even though I'm not there to do anything creepy ... but I digress.  I think the shelf was about $15.  I then went to a mostly male hardware store - just to keep it real - and bought 9 square bend hooks.  They're the kind that have a threaded screw type end on one side, and a 90 degree bend on the other. 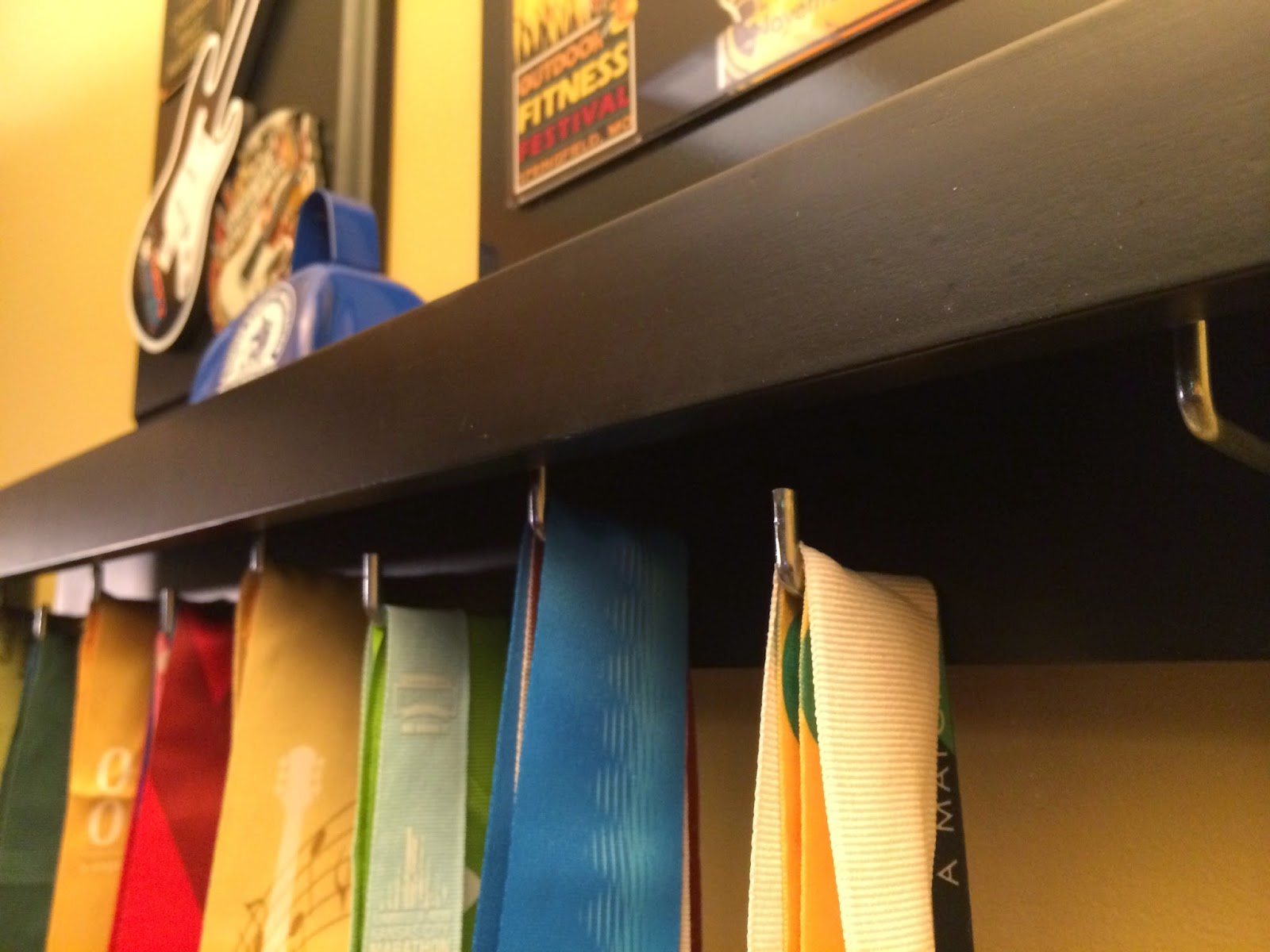 I then took said masculinely purchased shelf and drilled two rows of evenly spaced pilot holes ... 5 on the top row, and four on the bottom.  Since my drill press is broken, drilling the pilot holes completely perpendicular to the base was a little challenging, but I managed.  Next I inserted the square bend hooks, hung it on the wall, and added the medals.  I saw earlier today that Char had done a similar thing with her medals, but with a dowel under the shelf.  I think I like that idea better, but this will do for now.  I think it turned out fairly decent! 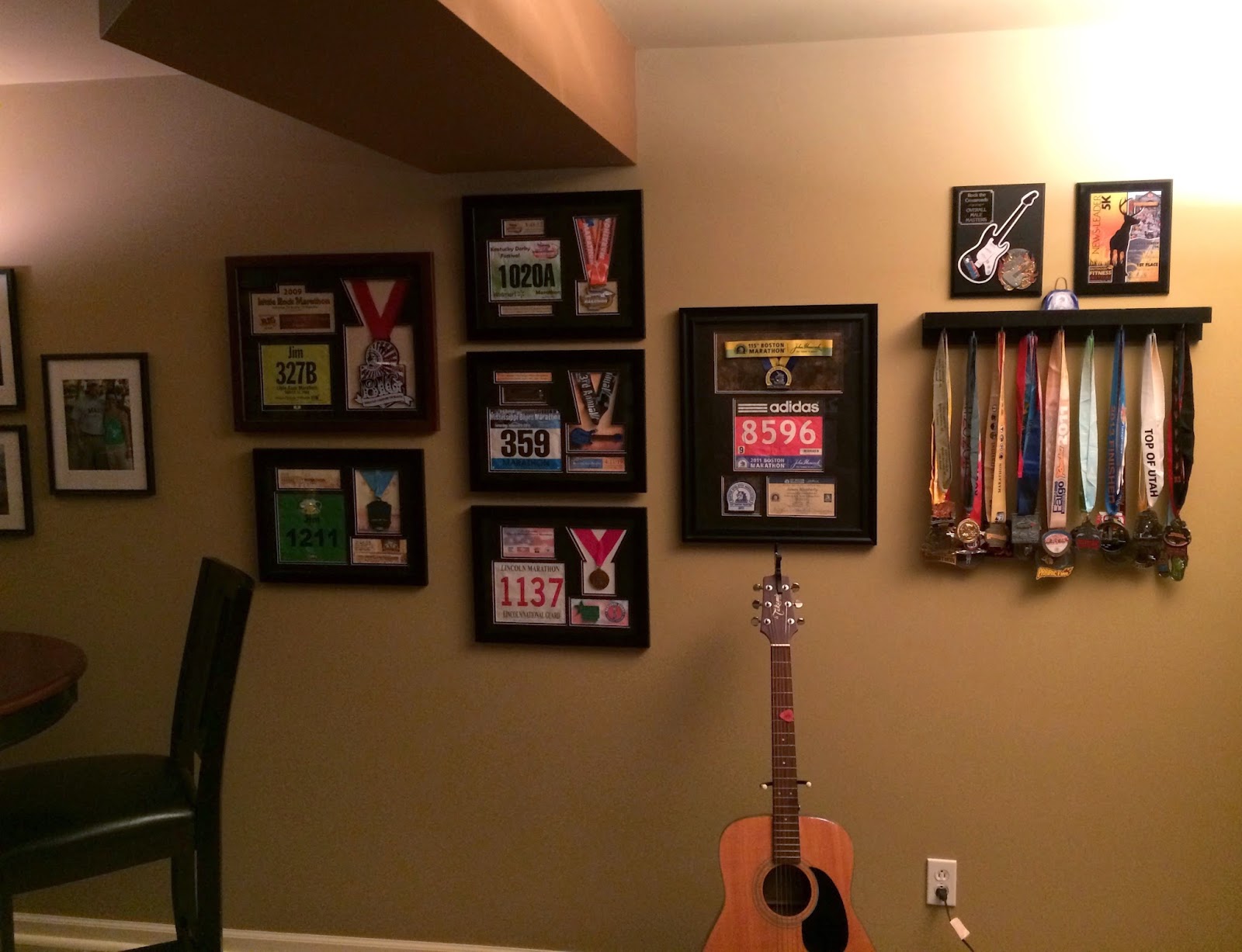 I've got some of my other marathon medals framed, but obviously I can't frame them all.  So this is a way to display the rest of them, sort of.  Hopefully seeing them on the regular will motivate me to get back in marathon mode.  This little project was quick, inexpensive, and really easy, but a little too crafty.  So if you need me, I'll be in the woods lumber-jacking a small clearing of trees or something.  Have a great week!
... be great today!
Posted by Jim ... 50after40 at 7:53 PM