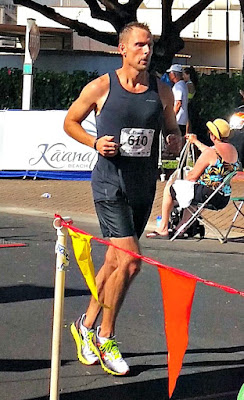 I was dumping cups of water on my head to cool my body down at Mile 4 of the 45th Annual Maui Marathon.  It was raining, and completely dark like the middle of the night, and the narrow shoulder of Honoapiilani Highway, which served as as our race course for most of the race, was lit only by the headlights of oncoming cars.  I'd planned on pacing much slower than normal because of the brutal 80 degree & 88% humidity conditions at the starting line that would only intensify, but I quickly found myself out of control and running way too fast for this early in the race.  I knew before too long I would crash ... and probably crash hard, but I was going to push it as long as possible.  And after 31 previous marathons, this would prove to be though toughest, but most beautiful race, I had ever finished. 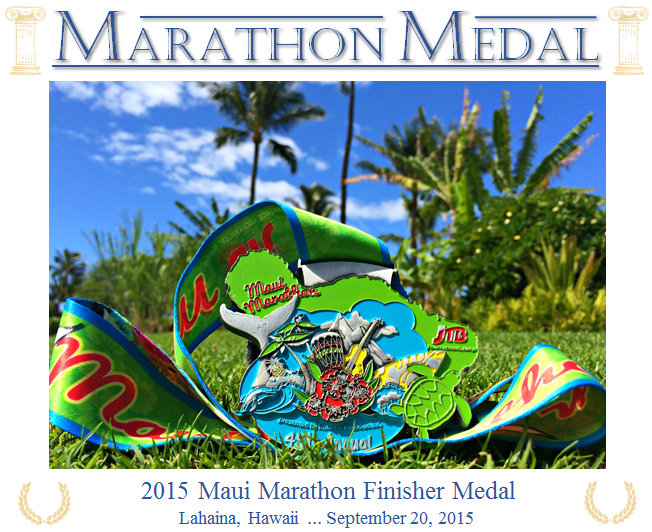 I probably won't have as many race details with this marathon review as normal.  Also, I'll try not to bore everyone with every experience and all of the fascinating history we learned about Hawaii during our visit.  Instead, I'll mostly share some of the photos of the amazing Maui landscape that captured during our visit.

As far as the marathon,  I obviously didn't run the race I'd planned, but still finished with a respectable time considering the conditions ... and walking most of the last three miles. I also was "forced" into making my first ever Aid-Station Tent visit after crossing the finish line.  I just needed a little time to sit there and recover, but apparently I looked like I was going to die so overly cautious heads prevailed.

But our 10-Year Anniversary trip to Maui was way more than either Michael or I could have dreamed, and accordingly, the race took it's proper place as simply one of many activities we enjoyed while in the island paradise.  The race actually took place on the second full day we were in Maui, so we both had plenty of time to recover while enjoying an amazing vacation.  Honestly, I'm not much of a "vacation guy", but I could've stayed in Hawaii much longer, and can't wait until our next trip back. It was our second trip to Maui, but this time I definitely fell in love with the beauty of the island.
The convenience of this race couldn't have been any better.  Our hotel location at the Sheraton was only about three hotels down the beach, and about a ten minute walk, from the race expo and finish line at the Marriott at Ka'anapali Beach in Lahaina.  To be honest, we'd booked our hotel months before we knew the location of the race festivities, so this was a mere stroke of luck.
There were only about 500 runners in the Maui Marathon, so the Race Expo was appropriately small, and held in one of the meeting rooms of the Marriott.  The start and finish line for the half-marathon were located immediately outside the hotel on Ka'anapali Parkway at the base of the West Maui Forest Reserve and mountain range.  The full marathon also finished here, but started 26.2 miles away in Kahului at the shopping center.

Since the race started at 5:00 a.m., we had to be at the shuttle bus location at the finish line by 3:00 a.m.  I'm not joking.  This meant waking up at about 1:30 a.m.  I met my friend Bobby at the bus, who was also vacationing with his wife in Maui.  I met Bobby several years ago at the Myrtle Beach Marathon, where we instantly became friends.  He's a great guy who I always enjoy hanging out with, but unfortunately since he lives in North Carolina, I don't get to see very often.  He's a great runner who is also running a marathon in every State, but is going to finish way before me.

On the way to the starting line, we chatted and caught up a little, but also noted the hot and humid conditions outside.  It was the middle of the night and literally over 80 degrees, with a sweltering 88% humidity.  All of the locals kept commenting on how it was the hottest stretch they could ever remember.