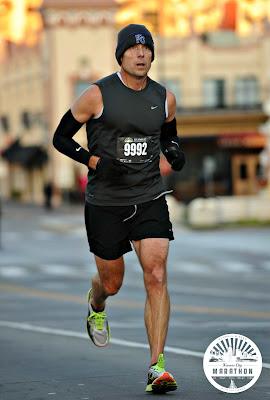 Last Saturday, we ran one of my favorite races ... the Kansas City Half Marathon!  I think by now, everyone fully understands just how much I love my hometown of KC, and this race is a showcases much of the beauty of our wonderful city.  The challenge this year however, was running on dead legs from standing at the Kansas City Royals Playoff game the night before, and then getting only 3 hours sleep.  But it ended up being a great race, and I finished only 24 seconds off of my current half marathon PR!

The Kansas City Royals are in the Playoffs for a second year in a row, and as Season Ticket Holders, we're fortunate to have tickets to all of the Playoff games ... which is incredibly awesome!  But frankly, the game times have affected both of our work schedules a little, as well as everything else in our lives.  This was evident in getting home near midnight from Game 1 of the ALCS, waking up at 3 a.m. for the race, and then being back at Kauffman Stadium at noon for Game 2 immediately after the race.  Really exciting ... but a lot of hustling. 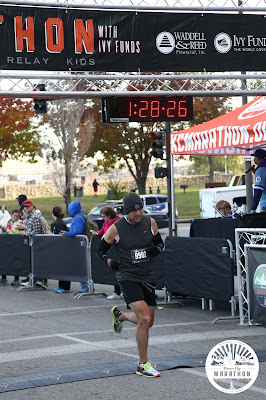 If you've ever been to a Playoff game for any sport, you understand there's a lot of standing ... cheering ... and screaming!  So the night before the half marathon, instead of resting, we were shouting our fool heads off, as well as being on our feet for most of the game.  And my legs felt it the next day.  They were completely dead as I stood at the starting line.  Plus, I was soooo sleepy.  I felt like doing anything besides running fast.

When people think of Kansas City, first off ... they think it's in Kansas.  It's not.  It's in Missouri.  It's not that hard to figure out.  I mean, it's on every map ever.  But it's a common mistake by out-of-towners.  Secondly, they assume that since we're located in flyover country, it's flat.  It's not.  Most Kansas City race are some of the hilliest that I run all year.  Especially when running downtown, the course can be quite challenging.  And the Kansas City Half Marathon is no exception.  It's filled with one steep climb after another that really break your pace.  Frankly, it is not an ideal PR course.

As I stood at the starting line, I couldn't help but be encouraged by the absolutely perfect running conditions of 45 degrees, low humidity, and almost no wind.  Absolutely perfect man!  But I found myself wishing that I had more energy.  I was completely dead.  My legs didn't feel like moving and I was so tired.  I was in pretty good shape, but I knew managing any kind of pace would be a challenge.

The gun went off and I started pretty slowly.  The first mile is a long gradual hill from Crown Center toward the Power & Light district downtown.  I just wanted to get up the hill and make the turn downtown where we got to run down hill for a while.  But I was struggling.  My legs just wouldn't turn over and I found it difficult to even manage a 7:25 pace.  It felt like this was going to be a long race.  Just a few  hundred feet in front of me, I could see the 1:30 pace group, and I thought to myself that I'd just keep them in range for a while.  But I soon found that they were running much faster than a 1:30 pace.

The first half of Mile 2 was downhill, but after that, we began a climb through Hospital Hill of 150 ft over the next mile.  That's a pretty good climb at race pace ... especially so early in the race.  This hill was added because the race was modified to avoid some downtown street car rail construction.

I felt pretty good about my conditioning going into the race, and the early climb really didn't bother me.  After the long hill, we leveled off for a bit as we rounded the Liberty Memorial WWI Museum parking lot.  It's a half mile "U" shape that gave my legs a little break before another steep incline on Wyandotte Street adjacent to the Kansas City Federal Reserve Bank ... Michael's former place of employment.

After the sharp uphill next to the bank, we got to run down hill for a while as we made our way toward Old Westport and the Country Club Plaza.  The changing trees made this already beautiful part of the city simply amazing, but I found myself already struggling to keep pace as we neared the half-way point of the race.  Ideally, I'd wanted to be firmly in the 6:30's by this time, but Mile 6 was my fastest so far, and it was only a 6:34.

I really began to fight  my pace a little during Mile 7 as we passed in front of the Nelson-Atkins Art Museum, and I knew there was a long three mile climb coming up that was only going to make things more challenging.  I just kept thinking, "Hold the pace until Paseo, then put the hammer down!"  Paseo Street meant Mile 10.  And at about 10.5, there was a long downhill until the end.  But before I could think about my pace on the downhill, I had to grind it out over the long gradual climb.  I stopped briefly to walk through water stops, which helped me catch my breath a little, but I knew by using that strategy, I was losing quite a bit of time.  Overall, considering the challenge of this stretch, I was pretty happy with averaging a 6:40 ... but now it was time to go!

Halfway through Mile 10 I caught my breath and really began to increase my leg turnover.  I was able to grind out a 6:21.  And as the grade sloped even more downhill in Mile 12, I sped up an ran near 5K pace and turned in a 6:07.  Mile 13 leveled off a little, and so did my pace, but I was able to run the final full mile 6:23.
I knew I was working hard, but since the course was so challenging, and my pace wasn't where I wanted it, I thought there was no chance of a PR.  But as I passed the Mile 13 marker, I knew I was close.  I wish I could tell you that I had a great kick until the end, but I hadn't ran the tangents very well, and what should've been the final .1 mile, turned into .23 ... and the result was 24 seconds short of a PR at 1:28:16.  But I really considered it great race all things considered!

After the race, I quickly found Michael and we made our way back to Kauffman Stadium for Game 2 of the ALCS, which the Royals won.  Our legs and bodies were exhausted, still running on 3 hours sleep and a half marathon under our belts, but the game was awesome!!!  The next day I took family photos for my son and daughter-in-law, and the boys ... but my legs and energy were definitely spent.  I felt like if I'd had more rest, and the course would've been flatter, I might have been in good enough shape to PR.  But it was a great weekend though, and I can't wait to run the race again next year!
... Be Great Today!
Posted by Jim ... 50after40 at 2:16 PM