Progress On A Progressive Run 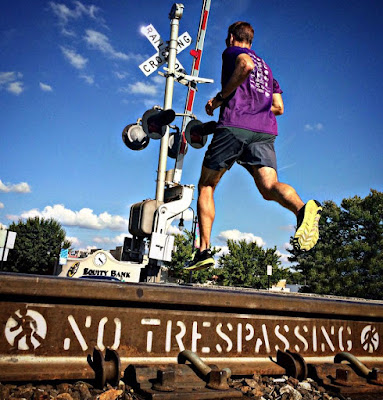 Training's going pretty well so far!  I'm a little overweight, but otherwise healthy.  And even healthier after seeing Dr. Wisner, my A.R.T. guy, on Monday. For the past month or so I had a little tightness in my right hip flexor that needed released ... which it was by the good doctor.   Now I'm ship-shape!

So on Thursday I attempted my first Progressive Run in a while.  I warmed up and cooled down with a half mile each for a total of 9 miles ... but here are the splits for the 8 progressively faster miles ...

Although I hit my goal of getting progressively faster each mile during the run, there were a few things that need improvement.

First, I stopped to grab water three times.  I couldn't help it ... I had to ... it was only 72 degrees, but it was literally 98% humidity and I was dying.  And, when I stopped during this run, I stopped the clock.  When I'm in really good shape I'll still stop for water but won't stop the clock - I either drink on the run, or just run faster for a minute to make up the time.

Secondly, there were way too inconsistent of gaps between the splits.  And that's simply because I'm not in good enough shape to "feel" the pace right now.  When I'm really locked in, I can pretty much tell exactly how fast I'm running simply by feel.  All of the miles at specific paces really develop muscle memory and I manage the tempo much more effectively.

But that said, the main positive is that I was able to hit a couple of faster paces with the humidity being incredibly high, really without too much trouble.  Plus, everything felt great when I was finished, with no issues.

So I'll keep plugging away - but so far so good!