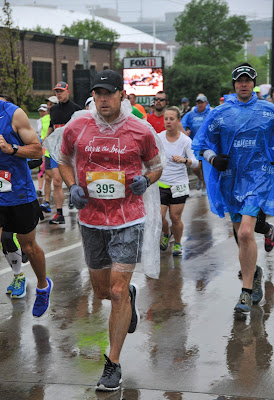 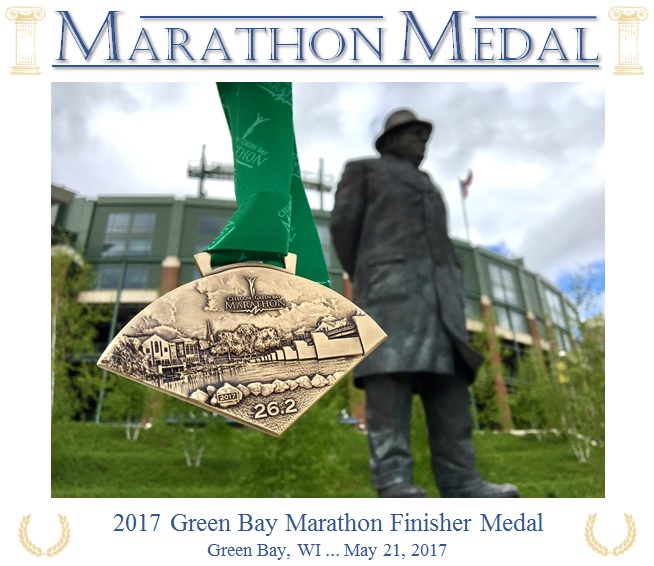 If you're looking for a very flat and very well organized marathon ... with an opportunity to run through the historic Green Bay Packer's Lambeau Field at the end, then the Green Bay Marathon is your race.  And even if you're not a fan of the NFL, it's still a really well ran event by the friendly folks of Wisconsin.

Like most red-blooded American males, I grew up loving the NFL.  Fall weekends always meant nothing but football at my house!  But frankly, over the past few years I've really lost respect for the NFL and rarely even watch the games any more because of the perceived acceptance and tolerance of domestic violence toward women. In the 2017 Draft, six players were drafted with sexual or physical abuse charges or allegations in their past.  One of the players drafted had punched a woman in the face so hard it broke several face bones.  Another punched a woman in the mouth, knocked out a tooth, and completely knocked her unconscious.  When questioned about drafting an individual with two domestic violence charges in his background, the Jacksonville Jaguars GM blew it off by saying, "I think we all have been accused of things”.  In my opinion, there is a cultural disregard for women in this organization, and I think their actions and words are proof.  And even though I love the sport of football, the ongoing drafting, glorifying, and overlooking of previous violations has really made the NFL hard for me to watch.  I believe in second chances, and I don't think these young men should be banished from society or anything, but it just seems like if you can run a 4.2 second 40 yard dash, a lot of things are swept under the rug.  But anyway ... NFL fan or not, an opportunity to run through historic Lambeau Field was something that really appealed to me, so I scheduled the marathon in Green Bay and made the 11 hour drive from Kansas City.

I stayed at the Hampton Inn on Ramada Way, only a couple of miles from the stadium.  All of the host hotels had shuttles available before and after the race.  While I was on my way to check in at the hotel, a woman in the parking lot said, "Hey ... I read your blog!"  Since I haven't consistently blogged for a couple of years, I thought maybe she had me confused with someone else, but as she approached I saw that it was my Facebook friend Julie Crutchfield, and her husband Eric (neither whom I'd never actually met in person).  They are both elite level runners ... WAY OUT OF MY LEAGUE ... who were in town to run the half marathon.  We chatted for a few minutes, and Julie was even kind enough to get a few photos of me crossing the finish line the next day ... really really cool of her!  It's always great to put a real life face with an "internet face", they seemed like really nice, down to earth people.

The race expo was held in the Lambeau Field Atrium, a large vestibule area on the North side (I think) of the 81,000 seat stadium.  It was the standard race expo with the typical shoe, running gear, sun glasses, nutrition, and upcoming race vendors on hand.  The Atrium was very spacious, so there was plenty of room to wander around and visit with the vendors.  Packet pick up was well organized and seamless.  All runners received a yellow dry-fit running shirt, running bib, and a race booklet.  There weren't a lot of "extras" with this marathon, which is always fine with me, but I know a lot of folks really enjoy the SWAG.  After gathering my race info, I grabbed some dinner at Sammy's Pizza & Italian Restaurant.  It was an older style place with great food where I carb'ed up for the race.  And after that ... the rain set in!

It basically rained most of the evening, throughout the night, and most of the morning on race day.  I woke up for the 7:00 a.m. start time about three hours prior.  It wasn't raining at that point, but all of the forecasts predicted rain at any minute.  The forecasts weren't wrong.  I opted for my personal car in lieu of the shuttle busses to Lambeau Field, where the race began and ended, and just as I pulled into the stadium parking lot, it began to pour ... and pour ... and pour.  I knew I wasn't in top shape for this race, and even on a perfect day 26.2 miles was going to be tough, but as I sat in my car and watched rain bead up on the windshield, I had a feeling this race might be especially tough.

One thing I noted about this race was the exceptional organization.  It was completely obvious where the bag drop was, and where the family meeting area for post race was located, all of the port-o-potties were front and center by the starting line, and the starting line was divided into corrals based on predicted time of finish.  It was really well done, and you never had to think about where to go to pick something up or drop something off.  The volunteers were real troopers as well.  Most of them were soaking wet at 6:30 in the morning, but they never missed a beat.  From the exceptionally organized water stops to the folks who got us going and pointed out the streets to turn on, they were all very helpful and very much appreciated.  Also, the Lambeau Field Atrium was open on race morning, so runners didn't have to stand in the rain waiting for the race to start.  We basically all huddled inside the warm waiting area until time for the National Anthem, and then made our way ... in the pouring rain ... to the starting line.

Typically rain runs are never as bad as they seem.  If it's not a complete down pour, you can actually keep your feet somewhat dry, which makes all the difference.  But not on Sunday at the Green Bay Marathon.  Standing in Corral A on Lombardi Avenue in the shadow of the stadium waiting to be sent off, I remember noticing how my feet were already completely saturated ... and as the gun sounded, my first steps of 26.2 miles were squishy.  Over the years I'd carried a rain poncho in my running bag for just such an occasion.  I threw it on in an attempt to stay as dry as possible.  But as I started running through the 55 degree thick morning air, I was burning up under the plastic.  So I had a decision to make, stay really really warm under the thin sheet of plastic ... or remain really really dry.  For the time being I opted for dryness.

The course is very flat with less than 300' of elevation gain.  I only remember a couple of small hills that required any of my attention.  That was a really good thing, because I was in maybe the worst marathon shape for any race so far.  We'd been making a lot of home improvements over the Spring, so most of my spare time had been spent on construction projects at my house ... and not on running.  The week before the marathon I ran 3 miles.  The week before that I ran 27.  The week before that only 24.  Basically 54 miles in the three weeks leading up to the race.  For most training cycles I would have been well over 100 mile during that same period.  My legs felt weak. I was a little chubby.  And more than anything, I just really didn't care much about running ... especially running 26 miles.  In fact, I thought this would probably be one of my slowest finishing times.  And I remember lamenting at about Mile 5 how exhausted I was already.

The rain continued as we made our way along the course adjacent to the Fox River through neighborhoods, small businesses, and municipal trails that were paved and well kept.  Green Bay is home to a little over 100,000 people, and it really had a nice small town feel, similar to Fargo, North Dakota.  Very nice people.  Nice homes.  And a warm and inviting atmosphere.  In spite of the rain, there were quite a few folks along the course, all cheering and offering words of encouragement.  This was especially true at the water stops.  They were all very well organized with Gatorade first, and water next.  And all of the volunteers cheered as you ran through.  They did a really nice job!

The rain tapered off around Mile 11 or 12, but it remained damp and foggy.  I finally shed my gloves and poncho, which felt much better.  But at Mile 12, I remember worrying that I wasn't even half-way done yet and thought I'd probably be walking a lot toward the end.  I'd racked up some really slow splits of 8:47, 9:41, 8:27, 8:14, and 8:10 with two pee breaks, a shoe adjustment, and a lolly-gagging tempo through all of the water stops so far.  But I really didn't care because my only focus to that point was crossing the finish line.  During the first few miles of the race, we'd made our way South along the Fox River, and then made a loop through homes in some adjacent neighborhood streets.  As we crossed the river and headed back North, we passed a lot of supporters who were gathered near the businesses on either side of the river ... and my legs were pretty dead already.

The highlight of the race was running through Lambeau Field during the last mile.  In other marathons, I've had the opportunity to run through Mile High Stadium, Churchill Downs, Kauffman and Arrowhead Stadiums in Kansas City, and Indianapolis Speedway just to name a few ... so it felt pretty similar to those stadium experiences, but it was still really cool.  Runners circled the outer edge of the floor of the stadium next to the stands with tons of supporters looking on from the first couple of rows ... probably the best seats many of them had ever had at Lambeau.  It was more congested during this last mile than any other because we'd joined the half-marathoners and a lot of folks were walking and taking pictures.  Every time I'm in one of those facilities I marvel at how huge they are, and I tried to look around a little as well, but my focus was on pushing my tired legs just a little more across the finish line.

After I crossed the finish line, someone patted my on the back and it was Julie Crutchfield who had snapped a few pictures of me finishing the race.  We chatted for a few minutes while I tried not to hurl, and then we both went on our way.  I had a long drive ahead of me, so I hung out around the stadium for a bit, but tried to get on the road as soon as possible.

For me, the Green Bay Marathon was a very nice event with the unique opportunity to run through one of the oldest NFL stadiums, that I'm glad I took part in.  It was my 31st different State that I'd completed, and for someone who runs a lot of marathons, I don't know that it really stands out from the others.  But the people were great, the organization was fantastic, and I would recommend it anyone looking for good fast Midwestern Spring race.
Posted by Jim ... 50after40 at 6:17 PM