A few last words of advice/encouragement for our "Boyeeeee!" Chris K of BQ or Die (I use "boy" very loosely)   He's going to BQ tomorrow at the Suf City Marathon! I mean, he's like 62 and only has to run a 5:15 or something ... but the "set" on this guy to call his shot like that, impressive! 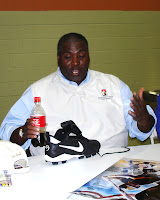 #1 ... Don't be like your beloved San Diego Padres.  Last season they collapsed near the end of the race ... NOT AFTER IT!  It's best if  you mimic your old friend, baseball great Tony Gwynn, as he huffed and puffed around the base paths ... take it VERRRRRRRRRRRRRRRRRY slow, at least at the beginning!  Good things will happen from there! 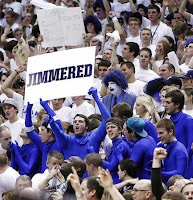 #2 ... Don't get "Jimmered"!  A couple of weeks ago your hommies from San Diego State were undefeated in the college hoops world ... that is until BYU's Jimmer Fredette dropped 43 points on the fellas.  Chris, don't risk it! If you see a tall, dark-headed, Mormon BALLER ... run the other way!
﻿﻿ 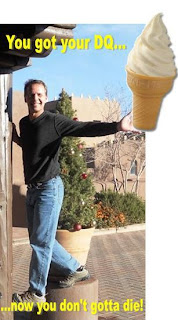 #3 ... If on the .000000001% chance something happens and you don't BQ - just change your Blog title to DQ or DIE!  Everyone loves sweet and creamy ice cream deserts from Dairy Queen!  Or BBQ or DIE!  Take it from a Kansas City expert, the Bar-b-que capital of the Universe ... you never go wrong with slow-smoked red meat slathered in rich & tangy sauce.  Plus, there's probably not a better diet or marathon fuel food out there!
Seriously dude, I would wish you luck, but you don't need it!  You trained well, and you've got this.  There's no doubt in my mind that on Sunday afternoon, you're gonna relax, watch the Superbowl, and start planning your trip to Boston!  Only one thing left to do ... go out there and git-er-done!
... be great today! (oh, and be great tomorrow too)

Email ThisBlogThis!Share to TwitterShare to FacebookShare to Pinterest
Labels: BQ or Die