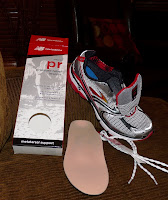 Takin' the High Road ...
I went to the New Balance store in Leawood, KS yesterday to get some metatarsal support insoles for my Brooks Ghost 3's that just arrived.  I had a bout with Morton's Neuroma a couple of years ago and the New Balance Pressure Relief Insoles literally transformed my running.  Morton's Neuroma is a condition of the nerves becoming enlarged and rubbing together, typically felt between the 3rd & 4th toes while running.  Very painful! These insoles elevate the arch a little creating separation between the nerves.  The insoles basically tack on $30-40 to almost every pair of running shoes I buy, but they have been a game changer.

While I was there I asked the sales guy if they had any Sure Laces, New Balance's ribbed, or bubbled lace that prevents loosening and coming untied during a run.  For me, they are the best "don't come un-done" lace on the market.  I use them in all my running shoes.
(Now, I freely admit this next part is probably just me being over-sensitive to whole "Johnson County Kansas thinks they're better than everyone" thing.  You gotta live here on the Missouri side of KC to really understand it ... mostly just a perceived social and economical class difference.)

Me, "Hey, do you guys have any of the Sure Laces?"

NB salesman, literally rolling his eyes,"I don't think we have any of those, no one uses them ... they really don't work."

Me, a little annoyed, but overly nice, "Man, if  you could check it would great.  I love 'em!"

Salesman, "Well I run several hundred  miles a year and I just double knot. It's not that big of a deal."

Me, thinking (that's cute, "several hundred"), "Yeah, I run a lot too, but they seem to be less hassle than double knotting."

After digging around in the back, he came out and handed me a pair of 45 inchers, which I can't use (too short), but I just smiled, "Thank you so much for checking ... I really appreciate it!"

After I left, I felt good that even though I wanted to, I didn't smart-off to this guy.  He was probably just having a bad day!

I was driving to the grocery store last night to pick up a few things, and in the distance I saw the familiar shadowy, smallish, thin figure slowly bouncing up and down on the side of the road.  Yes!  A fellow runner!  All of the sidewalks in our area are still packed with snow, so if you run outside you have the choice of 24-36" of road-graded piled-up mounds ... or the street. This young lady chose the street.

I immediately got over in the next lane, but the SUV in front of me held fast next to the plowed snow, even though there was a center lane free.  In fact, this gentleman didn't even give a courtesy slide over & hug the line a little.  As the Toyota passed, the very annoyed runner gave him the ol' over the shoulder "one finger salute"!  I noticed her a half-mile down the road, there's no way the other driver could not have seen her.

I just laughed to myself. I try really hard not to "signal", or become a nuisance in traffic, but we've all been there.  Just tryin' to get your run in without becoming road-kill.

Somewhere in the middle ...
My wife, Michael, is in Chicago this week and I'm a little out of my routine.  For some reason last night, I forgot to lock the front door before I went to bed.  Like everyone else, we accidentally do this once in a while, and when it happens I usually say to Michael, "Man, we're lucky a mad-man didn't sneak in and slit our throats while we were sleeping!" ... huh, what the???

Gee, that actually seems a little extreme when I think about it.  Does that really happen?  I mean, do throat slitters just stroll down the sidewalk in suburban neighborhoods at night, knife in hand, just looking for an unlocked door so they can unleash their mayhem???