50 Marathons After The Age Of 40...
Hi ... I'm Jim Weatherly. I'm a runner, Christian, husband, father of two, grandfather of one two three four five, and owner of Jack (RIP), Sammy, and Ellie ... the coolest labs ever.  We live in the Kansas City suburb of Lee's Summit, Missouri.﻿﻿

When I was in the 5th Grade I signed up for the One Mile Race at my school's annual end of the school year track meet. There was a small skinny kid that everyone said could not be beaten, but even at a young age I was pretty competitive, so naturally I took the challenge. When the race started, we both separated from the pack and he led most of the race.  But in the final 200 meters or so, with my heart pounding, legs shaking, and most importantly ... 5th grade girls screaming, I found an extra gear and passed him just before the finish line to win my first distance race.  Man, I was on top of the world, and I think I even still have the First Place Blue Ribbon in a box somewhere. One mile back in those days was like a marathon.  And for the whole year, I was "the champion" long distance runner.  I ran the race again in the 6th Grade, and won it again, and was looking forward to running track in High School. But at my school, we had to choose between track or baseball for Spring sports, so I chose my first love ... baseball.  And that was pretty much it for my running career for about 20 years.﻿


At age 29 I was over-weight, slow, and always tired. So I started trying to eat a little healthier and also began running a few miles a week to get back into shape. I ran a few 5K's here and there, but at age 40 decided I needed to challenge myself a little more.  Like most casual 5-10 miles per week runners, I thought marathons were something only superior athletes and crazy people attempted and could never imagine myself running 26.2 miles.  But I signed up for the Kansas City Half Marathon thinking maybe I could push myself through 13.1.﻿﻿﻿ ﻿﻿﻿ ﻿ ﻿


Even though I've always been a slightly above average athlete, I'll certainly never break records for speed in any of my races.   But I remember thinking after I crossed the finish line in my first half-marathon, it really wasn't about winning ... it was just about challenging yourself, and it felt great to be out there doing it!  I remember thinking it reminded me of how I felt during my first race when I was in the 5th Grade.  There was a rush of adrenaline I hadn't felt in years mixed with a huge sense of accomplishment.  I was instantly addicted to distance running and racing again, and I knew I couldn't stop at a half marathon ... I knew I had a full marathon in me.

I was born with a ridiculously obsessive personality and when I do something, I can't do it just "half-way" ... which can be a blessing and a curse.  I thought if the training went well and the first marathon didn't kill me, it would be really cool to run a marathon in every state some day.  I mean, 40 is the new 30 right?  And I really didn't put a time frame on it.  So what if I'm 96 when I finish the last state.

Of course like all runners I get all of the typical questions, comments, and smart remarks, "Aren't you a little old to be starting something like that?" "Why in the world would you want to just run for over 3 hours?" "Um dude, you're not a Kenyan!" and "Run-Forest-Run!"  Ha, so original.  Well after a lot of miles, shoes, and races I'm still alive and now well on my way in my marathon journey. In fact, in 2011 I had the honor of running the 115th Boston Marathon, probably the greatest athletic accomplishment of my life!

Along the way, I even got my family involved.  My wife Michael, has finished several Triathlons, 5K's and Half-Marathons, a full Marathon, and a Half-Ironman. My daughter Madison, has also completed several races including her first Half Marathon in Oklahoma City in 2011.  She's just like her ole' man and will probably run a full marathon before too long.  And even my son Gage and I have ran a 5K together, although at the time he swore it was his first and last ... we'll see!
﻿﻿﻿﻿﻿﻿﻿ 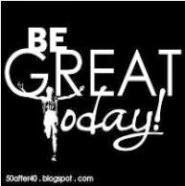 "Be Great Today!"
I usually sign every post with the phrase "...be great today!"  I've never been a big mantra guy, but this little phrase has been a huge part of my running career!  I had kinda hit a lull during my training for the 2010 Top of Utah Marathon, and at that same time, someone close to me was going through a really tough time.  I had a lunch meeting scheduled with this person and I wanted to give them something they could think about.  I started thinking, "Find your greatness", "Be the greatest you can be", ... "Be great today!"  From there it just kinda stuck.
﻿﻿
It seems like so often we settle for "okay" or "just good enough", and forget what it's like to push ourselves.  When I get tired in a race and think about quitting, I can literally be heard muttering this phrase to myself.  I probably sound crazy, but it has pushed me over the hump so many times and reminds me that there is "greatness" somewhere in all of us regardless of speed, pace, or finishing time.

﻿So﻿ this blog is a journal of my notes, thoughts, and ramblings about the races, places, and training along the way. I've never felt better and I have loved the experience. As soon as one race is over, I can't wait to start the next. Hopefully you'll find encouragement and motivation from my journey. I believe I can do this!  And I also believe you can do whatever you set your mind to! ﻿﻿
... be great today!﻿﻿﻿ ﻿