FEAR The BEARD!!!
I'm kind of a knucklehead!  Not superstitious at all ... but occasionally I'll do something that I JUST KNOW will bring me good luck.  That being said, allow me to introduce you to The PR Beard!  Like hockey and baseball players during their Playoff and Championship runs, I've decided to grow a beard that WILL NOT BE SHAVED until I PR in a marathon. 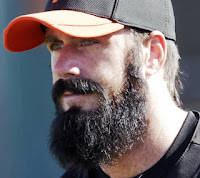 Even though a lot of people say it makes me look like Brad Pitt or DiCaprio, saddly, I'm not a good beard grower.  I have too much of a baby face.  Plus it's thin and red.  I kinda grow a Kid Rock splotchy mess that really looks horrible.  But you will FEAR The Beard!!!  If I had my way, I would grow a mountain man monster beard like Brian Wilson's of the San Francisco Giants.  A big long gnarly looking piece of art on the end of my chin.  But that would take me 73 years.  So I usually end up with something just a little better than a 10th grader ... or Chaz Bono.
Is this grandstanding?  Maybe.  But this senseless self-serving pathetic move has served me well in races in the past.  Plus, MICHAEL HATES IT!!!  So that makes it even funnier to me ... I mean in a loving way!  I think even if I could grow a real beard she would hate it.

This all started at my first marathon at Little Rock in 2009 (pictured right).  Yes, you could barely see the little guy on my face ... but it was there with me!  Just look at how intense I was ... Blue Steel baby!  All bui'ness with my face full of The PR Beard, sort of.  That day I ran my best marathon to that point!  Yes, I already told you it was my first ... you don't have to harp on it!  When I wanted to quit, The PR Beard told me to reach down deep inside and conquer the weakness and push through the pain.  I finished that first marathon for many reasons.  A personal goal.  My family.  But probably most of all ... for The PR Beard. 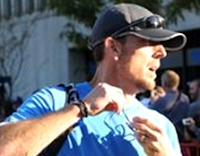 My Half Marathon PR came in 2010 in Kansas City (pictured left).  And you guessed it ... The PR Beard was right there with me! YES I KNOW YOU CAN BARELY SEE IT ... I GET IT, I DON'T GROW A GOOD BEARD!!!   But for your information many Jr. High boys would be proud to own it.  Just like me, The PR Beard does the best it can! I'm not the fastest dude in the race, and The PR Beard is not the fullest or best looking, but together we get the job done! 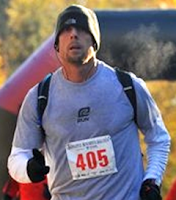 And finally there was Indy in 2010 (pictured right).  Not a PR, but I did run my second fastest marathon ever!  And if I do say so myself ... I had the second best beard in the race that day.  There was a guy in a Santa suit who out-bearded  me with long white whiskers.  But I'm not totally sure it was real. So my beard might have actually been the best, but who's to say.  It was cold in Indy that day, but ya know that thick lush rug on my face really kept me warm and made me run fast! 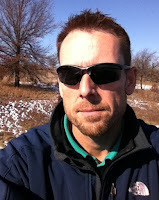 So yes Michael ... there is a reason for The PR Beard.  It's called manhood baby!  And it's a mission!  You might hate it.  You might make fun of me non stop.  And you might even make me sleep with one eye open so you don't shave it off.  But The PR Beard is real!  And it has spoken!  And you better pray that I run reeeeally fast at Tulsa next weekend.  'Cause this time, it ain't comin' off until I PR again.  And check it out ... if by some miracle I ever Boston Qualify again with it ... I'll probably just keep it forever!!!  FOR-EV-ER!!!  And slowly but surely, follicle by follicle ... you'll learn to love it like I do.  But if you can't love it ... you will honor it, and respect it, and you will FEAR THE BEARD!!! Seacrest out.
... be great today!
Posted by Jim ... 50after40 at 6:36 PM