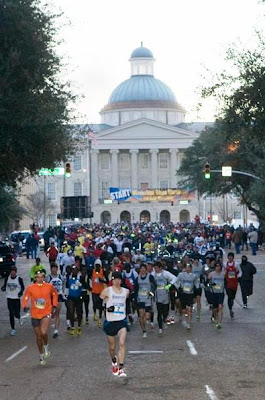 Finisher Medal
Jackson, Mississippi
Jackson, MS is the beautiful capital city of Mississippi.  The people are very friendly, with famous "Southern Hospitality".  The people are also very, very, very over-weight.  I had read online several times that Mississippi was the most unhealthy state ... and I am not exaggerating when I say that you can actually see it with your own eyes.  It's very sad, but a very high percentage of the non-runners I encountered were morbidly obese.  But it was probably one of the nicest places I have ever been, with smiles and a southern-drawl "Yes-sir!" & "Yes-ma'am!" everywhere you went.

Jackson is also in the heart of the Mississippi Delta, which is considered the "Birthplace of the Blues".   I love blues music and its influence on this city was evident everywhere you went.  There were signs and memorials throughout the city informing visitors that you were in the cradle of the blues civilization.  As expected, there were also several great bars and restaurants that featured live blues music.

Jackson seemed like a very nice place, and I would loved to have seen more of the local atmosphere.  However, they were in a cold snap that was producing record low temps.  Apparently race day was the second lowest recorded temp in Jackson history, at 15 degrees.  With temps that low, and most of the local people sort of acting like the ice-age Apocalypse was upon them, I didn't roam around as much as I would have liked.
Lodging
I stayed outside of Jackson in Clinton, MS at the Hampton Inn.  I wanted to use my Hampton Inn points for a free stay, and the Hampton Inn in downtown Jackson was too pricey for that, so I stayed 10 miles outside of the city and commuted back and forth.  Getting around wasn't bad,  but I was really cold & tired after the race, and the drive back to the hotel was miserable.  It would have been nice to stay closer. 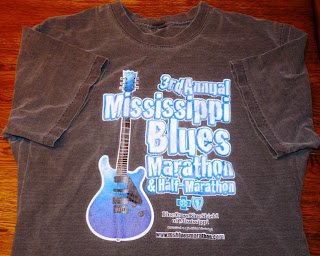 This was one of my favorites of the trip.  I'm kind of a loner at marathons.  I like to check in, get my gear, and get back to the hotel to rest ASAP.  I hung around for quite a while at this expo though, thanks to the great live blues playing in the lobby after packet pickup.

First the race packet.  This was, by far, the best race packet I've ever received for any race, anywhere.  Along with the standard upcoming race leaflets and flyers ... it included a pretty cool dark grey marathon t-shirt with a huge guitar.  Also, blues CD featuring many of the original artists from the area. And best of all, an engraved HARMONICA.  Yeah, a freaking harmonica.  Pretty cool.  I framed it with my other race stuff and the medal.  All of this came with a great draw-string gig bag.  I use the bag all the time for other marathons.  Great race packet ... this one will be hard to beat!

Course
This was one of the biggest disappointments of the marathon.  I could be 100% to blame, in that maybe I misread the course elevation a little. But I've seen other complaints of this course on other blogs as well, so apparently I'm not alone.  I really anticipated a very flat rolling hills course.  Don't get me wrong, it's not like it was a challenging mountain track - but definitely a lot more rolling hills than I expected.

That aside, the biggest problem with the course was it was fairly boring, but most importantly ... VERY DANGEROUS!!!  I think they have changed the course a little since 2010. But when I ran it, there was an out-and-back portion along a divided highway.  Orange cones were in place to designate the area for runners, but many of the cones were literally on the white shoulder line, or on the traffic side of the line.  Most traffic, some travelling at around 35-45 mph, blew by you at a very close proximity.  I swear, I could have reached out and touched some of the side mirrors on these cars as they passed.  A little too close when you're trying to focus on a race.

Also, I am VERY reluctant to say anything negative about local law enforcement during a race. These men and women risk their lives every day to protect us, and helping out at a stupid race should be the least of their concerns.  That being said, there just weren't very many cops present at intersections and throughout the race.  It seemed at several tracffic lights, it was enter at your own risk.

Spectators
Unfortunately, it was about 17 degrees during the race with a wind chill factor of about 6 or 7.  I think the locals were more concerned with getting inside by a toasty fire, than watching for runners - which is understandable.  The support staff was great throughout the race. Though sparse, my hat's off to these guys and gals who volunteered their time to hand out water, gatorade, etc.  17 degrees had to feel Antartica to these Mississippi folks!

The post-race activity was great.  There was a huge, WARM tent in place with live music and plenty of chairs available for you to take a load off.  The staff was friendly and it allowed you a little time to sit and warm up before heading back to the hotel.
... be great today!
Posted by Jim ... 50after40 at 6:34 AM