Only five days now ...  until my first back-to-back marathon challenge!!!  I feel kinda like I did when I ran my first marathon at Little Rock, Arkansas in 2009.  I'm pretty confident I can get through it, BUT there is still a lot of uncertainty.  I mean 26.2 miles in two consecutive days ... within 24 hours of each other ... well that just sounds crazy!  But hopefully my training was adequate and I'll be okay.  I know thousands of folks run back-to-backs without any trouble - but like everything else, when it's your first time, there's a little apprehension.

Hopefully even if I have to walk the last 10 miles, I'll finish.  But if you've read my blog for a while, you know I have to have a goal to push me.  For some reason it sharpens my focus - like I'm not just running aimlessly.  So like all other races I've ran, I have a couple of goals in mind ...

If you've ever ran Kansas City, you know it's fairly hilly.  I know many of you are thinking, "Kansas City ... hilly???"  Yes, we actually have hills in Kansas and Missouri!  So honestly, I really don't care much about the 3:45 goal on Saturday.  I just plan on taking it smooth and slow.  When there's a hill, I'll just slow down and focus on a good finish.  Saturday is just not the "real" goal.

But Sunday at Des Moines, I would really like to finish under 3:30.  For me, that would be AWESOME!!!  If I could finish the second of two marathons in two days under 3:30 ... I would be very satisfied.  (And this is coming from someone who is never satisfied with his performance) 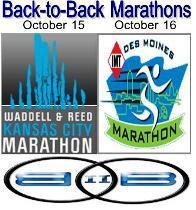 BUT ... understand the "real goal" is JUST TO FINISH!!! These paces are only something to keep me focused ... just something to shoot for. And based on my training runs, I think I can be in these "pace ballparks".  But, if I don't hit them ... I won't be disappointed at all!  I just want to make it through my first back-to-back challenge healthy and ready to PR by the end of the year in Alabama in December.

I've done quite a bit of training, not only with mileage obviously, but also with planning out my nutrition.  A special thank you to Jason of CookTrainEatRace, and Hannah of SeeHannahRun, who both gave me great advice on refueling.  Jason suggested smoothies ... which have done the trick and been a great idea.  And Hannah reminded me to refuel during the races, which honestly I had gotten away from a little.  For these races, I'll be using Stinger gels.  To me, they taste like pure honey - but seem to be the best gels I've found.  The toughest and most important element for me in back-to-back long runs has been getting enough fuel in my system for the second day.  This hasn't been as easy as it sounds.

Getting "enough fuel" sounds simple right?  I mean don't you just eat everything in site before the second race?  Not exactly ... I tried that!  I've found that it means putting the right formula back into your system so you have appropriate energy the second day, without feeling like a stuffed turkey on Thanksgiving.  Fortunately, I think I finally have the right combination.  It worked perfectly last weekend when I did 24 & 22 miles on Saturday & Sunday.  Hopefully it was an accurate dress rehearsal.

We've also had to do a little special planning to coordinate two races, in two cities that are about 3-1/2 hours apart, in 24 hours.  I live in Kansas City, so that one's easy.  Plus I've ran KC several times before, so I kinda know the drill and exactly where everything is.  Fortunately, I work in Des Moines all the time, so I don't think this will be a big deal either.  I'm really familiar with the city, and it should just be a matter of finish KC, zoom to DSM, pick up the packet for Sunday, and chill at the hotel or go watch a movie or something on Saturday night! Hopefully stress-free!

Michael and my kids have been great as well!  My son Gage, is planning on watching me finish in KC.  And my daughter Madison, and her FIANCE Nate (more on that later), are actually making the trip to Iowa to watch the old man limp across the finish line.  So it should be a great weekend!  Hopefully everything goes well.