Overview
This was my first attempt at back-to-back  marathons on consecutive days.  And I knew for this first of two races, I would really have to focus on slowing my pace more than usual in order to conserve energy for the Des Moines Marathon on Sunday.  The main objective was simply to get through both races healthy, but I also had a couple of time goals in the back of my mind.  I wanted to finish Kansas City in about 3:45 and Des Moines in 3:30.  Even though the Kansas City course is fairly hilly, I knew the 3:45 on Saturday shouldn't be much of a problem.  I could basically use it as a nice relaxing "warm up" run.  But if I went out too fast in the KC race, the 3:30 at Des Moines would be impossible. Most of my training runs had been in these time ballparks, so I thought the time goal might be doable. I ran several back-to-back long runs while preparing for these races, with the longest being 24 & 22 mile runs two weeks before. Refueling after the first long run always seemed to be the biggest challenge.  My legs usually felt pretty strong on the second day, but I really seemed to struggle with enough energy to finish as fast as I wanted.  So I spent a lot of time focusing on diet and recovery from the first day to the second.

Once I was comfortable with a good recovery strategy, I knew that completing both races was simply going to be a  mental challenge.  I would have to be mentally disciplined during the first race, and just plain mentally tough for the second.  I practiced by running at various times of the day in various situations.  I tried to run a lot when I was really tired, simulating as much fatigue as I could.  And I think it all really paid off.  Once the gun went off, there was never a question during the two races if I could complete the runs, only if I could meet my time goals.

There are a few things that I'll do a little differently when training for my next back-to-back marathons.  I'll probably try to get up to 30/30 runs on the weekend.  Also, my strength training took a little bit of a back seat during this cycle due to additional traveling at work.   Most importantly I need to eat better during the day and cut back on junk food.  I always burn off the junk calories during the next morning's run, however it just adds nothing for me physically.  But overall, I felt well prepared and was extremely happy with my performance on both days.

Course
While not the toughest course in the world, the Kansas City Marathon features plenty of elevation changes for an overall elevation gain of 900 ft.  There is a 225 ft climb from miles 2 to 3.5, another 175 ft from 11 to 16, and finally a 200 ft incline from miles 20.5 to 23.  Also, there are several turns on the course making it a little tough to run the tangents well.  I'm usually pretty good at keeping my mileage to a minimum during a marathon, but I ended up with 26.42 miles at Kansas City.

Pace & Splits
Typically during most of my training, I'm at an average pace of 7:30-7:40/mile, with speed work timing at an average of 6:00-6:30/mile.  So keeping my pace slower, around 8:30/mile for the Kansas City Marathon would be a little bit of a challenge.  Managing this pace on the uphill climbs wouldn't be a problem, but the downhills would require quite a bit of discipline to keep my pace where it needed to be.

In past races, the initial climb of 225 ft at the Liberty Memorial has taken quite a bit out of me.  The first time I ran the race in 2008, I had no idea that the climb was as steep as it was, and I really struggled the remainder of the race.  On Saturday, I just took it nice and slow and enjoyed the surroundings.  It was a little surreal watching other runners battle this hill, huffing and puffing, while I kept my pace controlled.  But it felt pretty good.

I was most amazed at how I felt on miles 21-23.  This portion of the race can get a little boring running North on Paseo.  There's not as much to see as earlier in the race, and usually by that point I'm just ready to be done.  But on Saturday, these miles didn't have any negative effect on me at all.  Just like at the Liberty Memorial, it was really different to just coast along, running by many other runners, who were struggling to maintain their pace or even finish the race.  I felt like I had done a pretty good job of conserving energy at this point and the final miles just flew by.

My low heart rate was another very positive aspect of this race.  On only 7 miles did I average over 160 bpm.  My overall average was 155 bpm, which is only about 78% of my max heart rate.  However for the first 6 miles of the race I was in the low-mid 140's, or about 71% of my max.  I never really remember "huffing & puffing" at any point.  Plus, the 50 degree temperature for most of the race was perfect as well.

I finished with an overall pace of 8:30/mile, and felt good enough as the finish line to jump in the air and click my heels ... which drew a cheer from the crowd, which was pretty cool.  And I was extremely happy with how I felt after the race.  At no point did I feel any pain or serious fatigue during the run, and I was really excited about the race the next day in Des Moines.  For  me, running a slower paced race is always much more enjoyable than trying to run fast or PR.  Obviously, I love running fast and racing the clock, but running slower just allows you to enjoy much more of the course and your surroundings.  And with this approach, Saturday's Kansas City Marathon was one of my most enjoyable to date! 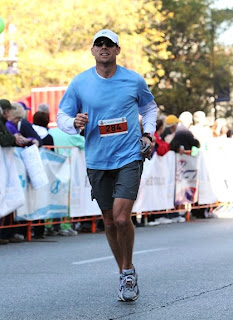 Recovery
Probably the most important aspect of back-to-back marathons was recovery after the first race.  I got A LOT of help from fellow bloggers on the approach I should take, and it paid off.  Typically I don't use gels in a race.  But for this marathon, to add electrolytes back into my system, I consumed two Stinger Gold Energy Gels.  I also drank quite a bit of Gatorade, and ate every banana, orange, and apple slice on the course I could get my hands on.  After I gathered my medal and finisher shirt, and snapped a couple of quick pictures with Michael, I was literally at the car stretching about 20 minutes after the race.  To stretch, I brought along my Trigger Point Roller and an old blanket, which I spread out on the ground beside the car on the parking garage floor.  I rolled out for about 15 minutes with some light stretching, and then got in the car for the 45 minute car ride home.

I had a pre-made smoothie icing in a cooler in the trunk of the car which I ate on the ride home.  It was a pretty good idea to have it pre-made and ready since the car ride home took us a little longer than anticipated.  Once we were home, I showered, ate a little more, stretched, gathered our pre-packed bags, and headed to Des Moines.  We stopped at Subway and had lunch, and for dinner in Des Moines I again ate Papa John's Chicken & Pepperoni Pizza.  Which is probably not the best pre-race meal, but it has always seemed to work for me.  For future races, I'm going to really try to cut down how many carbs I eat the night before, I think they're contributing to a little late race stomach issues.  But for this race, I just wanted to stick with what worked.  Following is specifically what I ate after the marathon in Kansas City as preparation for the Des Moines race the next day. 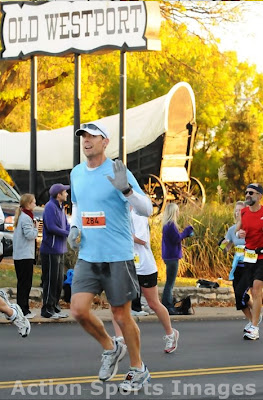 Lunch (about 1-1/2 hour later) ...
Afternoon Snack
Dinner
Summary
After packet pickup at the Des Moines Convention Center, we went back to the hotel room where I tried to relax and began gathering my gear for the run on Sunday.  I tried to stay off of my feet as much as possible and rolled out and stretched one more time before going to bed.  I was unsure about how I would sleep with anticipation of the race the next day, but I rested really well that night.  Plus, I was completely satisfied with how the day had gone, from the race all the way through with recovery.

Getting through the run on Sunday was the "real goal" of the whole back-to-back marathon challenge.  But looking back at the 2011 Kansas City Marathon, I'll be hard-pressed to find another race that enjoyed so much.  Everything about the day was perfect, and I'm very blessed and thankful to have had the opportunity to run it.
... be great today!
Posted by Jim ... 50after40 at 4:31 PM