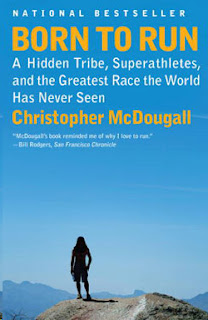 I just finished reading "Born To Run", by Christopher McDougall.  GREAT BOOK!!!  As many of you know, it was one of the key components that helped ignite the current barefoot and minimalist running "phase" that has swept the United States.  Although it glorifies dirty-filthy hippies a little too much for my taste, and is grounded fully in some half-truths and obscure scientist's THEORIES about how and why were're here today, I loved it!  Simply one of the best books I've read in a while full of great stories, and it was an fast-easy read!  I would highly recommend it!  And while I have NO intention of EVER running Badwater or Western States, traveling deep into the Mexican wilderness to chase a remote tribe, or publicly running barefoot ... it did cause me to reevaluate a few things about my running.

A few weeks ago, my wonderful wife - Michael of SlowlyTri-ing - commented, "My husband Jim very adamantly thinks the minimalist running thing is a fad, and maybe it is."  Oh Michael ... Sweetie, that's not 100% accurate.  It's not that I'm against minimalist running - or better stated, forefoot striking - by any means.  I just believe that shoe companies could market tin cans with shoe laces as the flavor of the month, and most of us would rush and buy them.  Minimalist shoes have exploded because they're the "latest & greatest" and look cool.  I'll bet about 50% of the folks who buy them have no idea why they're even on the market.

Truth is, I have been working diligently on my foot strike all year.  Long before I ever heard of "Born To Run", "Caballo Blanco", or "Barefoot Ted", I was trying to teach myself to stop heel striking.  Just a little research into the science of it all taught me that heel striking is not the way to go.  But this book really made me take a closer look and evaluate why it's not the best approach to form.  I don't at all buy into the book's message of "We evolved into runners to catch our prey", or "running makes us better people" mumbo-jumbo.  In fact, Chapter 28 (largely where the book's title was derived) is probably the most far-reaching, ridiculous, fantasy-land stretch of literature I've ever read.  But as I read, I couldn't get past one point the book repeatedly made ...  having a stronger foot will make us stronger runners!

I've been very fortunate with running and just don't suffer many injuries.  But this past year I really tried to analyze the gates of the world's best runners and mimic them as closely as possible.  I know that I'll never be in their class, but I figured that it couldn't hurt to try and pattern my running style after them.  I found that they are ALL forefoot strikers.  They land on the balls of their feet, not their heels!  And their foot strike is almost directly under their hips instead of out in front. So even though I ran fast enough as a heel striker to qualify and run in the Boston Marathon ... it got me to wondering just how much faster and more efficient could I get if I copied their strides?  Couldn't hurt, right?

As far as reducing injuries with this method, which the book really sells ... I'm not really sold on that either.  I think most likely as we shift to minimalist running shoes and change our strides to adapt, we'll probably just change the kind of injuries we have now.  I really believe that most injuries are unfortunately from poor genetics.  Some people just get hurt more than others.  I was a three sport letterman in High School (football, basketball, baseball), and played baseball in College.  After school, I ALWAYS stayed active in some sort of sport all my life. Heck, I was voted "Most Athletic" of my Senior Class.  (The point is, I've never NOT been doing something related to sports)  The ONLY injury I ever had was in a pickup basketball game at age 21, when I landed on another guy's foot after a rebound and sprained my ankle.   Knock-on-wood, I've just been very fortunate to this point.  But I also think my body is probably just wired differently than others who can never shake the injury bug.  So while I do see a benefit in forefoot striking by reducing the jarring force on your frame, and strengthening the foot by reducing some of the current shoe cushioning we've grown accustom to ... I think we will probably see the same amount (just different types) of injuries as people evolve into this style of running.  But maybe I'm wrong - we'll see I guess.

But all that being said ... I'm on board!  I kinda have been for a while now.  But for the past two weeks more than ever, I've focused on landing on the ball of my feet and not my heel.  I've also made a conscious effort to shorten my stride and lean forward a little.  I'm probably becoming a student of the POSE method more than any other.   Who knows, I might even shop for a pair of minimalist shoes this weekend.  But let's not get carried away! And seriously ... pick up a copy of "Born To Run" ... it's a great book! (And of course I was kidding, who doesn't love dirty-filthy hippies!)
... be great today!
Posted by Jim ... 50after40 at 7:29 AM