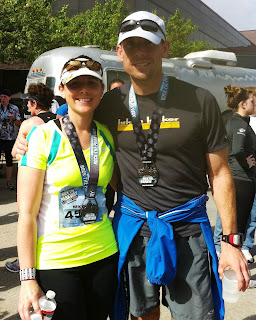 I've often said that even if there were no races or finish lines, I would still be out there running.  I love to run, and running has provided me many great moments.  I've ran with family and friends.  I've been very fortunate to experience a lot of the United States running marathons.  I've ran across the finish line at all kinds of races, sometimes faster than anyone in my age group that day.  And I had one of the greatest honors of my life last April running the Boston Marathon.  In fact, when I look at the big picture, there have been very few low moments involving a run.  But yesterday ... was by far and away my most disappointing and worst day ever running.  And as I write this race report more than 24 hours later, it's still killing me.

I'm angry, frustrated, disappointed, and feel like I missed a great opportunity all in wrapped into one.  I never train specifically for shorter races.  I usually just run them as fast as I can as part of marathon training.  But for almost a year, I have eyed this race as a PR opportunity and trained specifically for it for about 3 months.  I had hoped to be down around 1:25-1:26 and maybe even sneak into the top 3 finishers of my age group.  And I was quite sure that finishing faster than my previous personal best of 1:30:46 was in the bag.  But not only did I NOT set my personal best on Saturday at the Rock The Parkway, I was over 2 minutes off the pace and walked 3 times toward the end ... in a HALF-MARATHON???  And yes, obviously I understand that I'm not gonna get a lot of sympathy after finishing in the top 100 of a 4,000 person race.  I know there are many people who would love to run a 7:05/mile pace half-marathon.  I get it.  I mean only ten 40-44 year olds finished ahead of me and 216 finished behind me!  However, this post is simply about not meeting your own personal expectations rather than quantitative times or finishes. 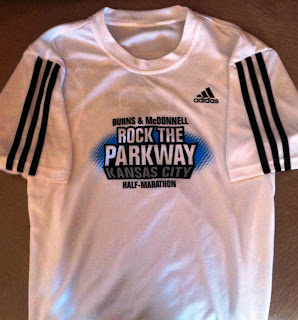 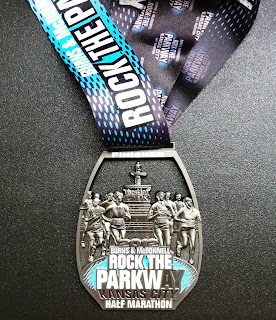 But maybe more than anything I was simply embarrassed.  There were so many of our family and friends there on Saturday, and many of them had great races.  If you read my wife's blog, you'll see that she blazed a personal best with an amazing pace of 10:57/mile.  And although I'm feeling sorry for myself - I couldn't be happier for her!!!  She's turning into a really good runner and all of her hard work is really paying off!  Then there was my ex-brother in law, who at times has been more like a younger brother to me.  He's an amazing Ironman and Triathlete, but I've always felt like I was at least a little faster runner than him.  But he ran an awesome PR of 1:29:35.  (I'd be lying if I said it didn't bug me a little that he smoked be by more than 3:30!!!)  I sent him a congratulatory email, and he gave maybe the best compliment I've ever received from another athlete.  He said "I knew you were back there lurking somewhere.  I spent the last 6 miles wondering when you were gonna pass me".  Somehow that made me feel a lot better about the race.  But Saturday just wasn't that day!  And many of our other friends from running, work, and triathlons had great races as well.  I'm really happy for all of them - I just wish I could have been part of the celebratory day!
Race Day...
The Kansas City Rock The Parkway is an awesome event that I would highly recommend to everyone.  It's ran more like a big marathon with an awesome packet-pickup and race expo at the Overland Park Convention Center.  But probably the most impressive aspects were the wonderful organization and pre and post-race parties.  They had great live music, wonderful food, and a terrific atmosphere held in the parking lot of Black & Veatch on Ward Parkway.  The course is a beautiful out & back that takes runners down tree-lined Ward Parkway in Kansas City, MO, past Ward Parkway Shopping Center, before circling Jacob L. Loose Park, the historic site of the Battle of Westport.  The course is described as fast and flat, which I would disagree with slightly.  It features rolling hills with a total elevation climb of about 400 ft.  There are no "killer hills", but the course definitely makes you focus on pace.

Michael and I got around early to meet her friend Christi who was riding to the race with us.  When I woke up, I felt great and confident, and focused.  I was locked in and knew this was gonna be my day. We snapped a few pics our World Famous Pre-Race Dance Party, and then off we went.

The Midwest got hammered this weekend with thunderstorms and tornadoes, and going into the race, there was a concern that we would experience heavy rains and high winds at the starting line.  But when we arrived at the pre

I got in about a half-mile warm up before the race, trying to loosen up prior to - as opposed to during the race.  I felt I had started way too slow in previous races and wanted to hit the ground running in this one.  And standing at the starting line, I felt pretty good.  I noticed I was sweating a little more than usual at that point, but it really didn't concern  me.  I was in the zone and knew I was gonna rock this mother!  The gun went off and I started a little too fast - but tried to slow myself down.  During most races, I've felt like I left too much time on the clock in the first few miles.  And I felt like I had plenty of energy, plus it was "just a half-marathon" right, so I pushed it a little.  But literally at mile two, I was dripping with sweat and knew that I had a big problem on my hands.

For the first half of the race, my heart rate was elevated.  I was really working to just keep up with the 1:30 pace group.  Throughout the race, I just never felt like I found a good rhythm or got comfortable.  I knew I had started too fast, and I was struggling to keep pace, but I couldn't force myself to slow down and catch my breath.  I was convinced that since it was "just a half-marathon", I could power through for 13 miles.  But I was wrong.

For most of the race, the 1:30 pace group was about 100-200 yards ahead of me.  I was able to keep them in sight and thought that if I could hold on until the final few miles, I would just breeze by them and at least get a PR out of the event.  But after struggling through mile 9 with a 7:22, mile 10 with a 6:59, and mile 11 with a race worst 7:46 - the pace group began to disappear and I realized that it wasn't going to happen.  So after mile 11 ... I stopped and walked and tried to verbally hold in the stream of profanity racing through my head.  I couldn't believe this was happening.  All the hard work, all the hours of training ... I had blown a golden opportunity.  I was in great shape, but I just didn't have it on Saturday.

I walked two more times after mile 11.  There's a weird thing with me.  If I'm not gonna PR - I have A LOT of quit in me.  I'll always finish.  But it's kinda like I say, "what's the point" - and I'm no stranger to slowing way down and even taking some breaks.  Probably pretty shallow and immature I know, but if I'm not gonna finish in the top three or PR, I just don't see the point of killing myself.  I dunno - that's just how I do it.

I finished the race and walked back to the car to change out of  my wet clothes.  My finishing time was 1:33:02 - no where near a PR.  I was crushed.  I know was a good time, but it felt really pedestrian after all of the race-specific work I had logged.  And after looking around to make sure no one was watching me, I opened the trunk and threw my medal, my water bottle, my ipod, my shoes, my shirt, my heart rate monitor, my hat and sunglasses against the back seat - really hard.  I was so pissed.  And admittedly I was acting like a complete child.  But in case you haven't noticed by now - there aren't many people more competitive than me.  If I go out and do my best, but it's simply not good enough, that's fine.  But going into the race, I felt like I was much better than my finishing time indicated, and I felt like I had let myself down - and that's pretty tough to take.

After my little temper tantrum, I walked back to the finish line to watch for Michael.  There were so many people hugging, high-fiving, and fist-bumping ... I was so jealous.  But I got my phone ready to catch a picture of Michael as she crossed the finish line with yet another PR.  This girl has been a PR machine lately!  As she crossed the finish line, she was waving and smiling and I knew she had PR'd again!!!  She was awesome on Saturday and even though I was really disappointed, I was excited for her.

After the race Michael tried to talk me down from the ledge.  She knew I was so disappointed, but I didn't want it to ruin her big day.  I literally lost sleep on Saturday night thinking about what a huge failure the race had been earlier in the day. If I had to put my finger on one thing that cause my poor results, I think it would be the race pace.  I went out way too fast on a warmish steamy morning.  I'm just not one of those people who can run the whole race at a certain pace.  I have to start really slow and ease my way into it, finishing the thing much faster than my final time.  That's just how I have to do it.  Huge negative splits are the key to me running well in races.  So hopefully I'll tuck this away in the memory bank and use it as a lesson learned for future races.  One thing's for sure, I won't forget about it any time soon.

I began this post with how much I enjoy running.  And on Sunday morning, even though the sting of the failed PR attempt was still fresh in my mind ... I ran.  I ran in part because I was still pissed and needed to get some lactic acid and frustration out.  I ran in part because I felt like a new run would help erase the memory of the day before - it didn't.  But mostly I ran because that's what I do.  Rain or shine.  Success or failure.  I run.  And I always will no matter what.  Hope your weekend went better than mine!  Have a great week!
... be great today!
Posted by Jim ... 50after40 at 6:37 AM