Just in case you haven't heard, the 2012 Major League Baseball All-Star Game is being played in our beautiful hometown of Kansas City, MO this year!!!  Yeah, you heard me ... my Royals get to host something awesome! (Unfortunately it probably won't be a playoff game for a while) And on Sunday morning, Michael and I ran in the MLB All-Star Game 5K and had a blast.

It was our second 5K race in 5 days, so we both took it pretty easy.  I ran with Michael, and she didn't really try to kill it since she has her first half Ironman this weekend.  But since it was a race - we of course celebrated with the Prerace Dance Party!  Michael acted like she was sliding into home and break dancing at the same time.  Surprisingly, she didn't injure herself at all with this move!  Shocker!!! 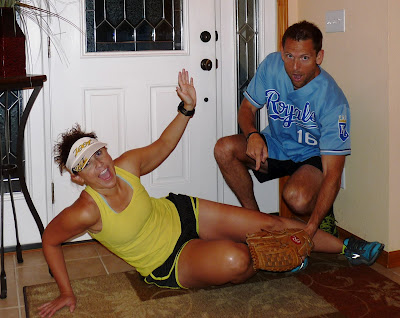 We actually had considered not going to the race since neither of us were gonna run it hard, but like our friend Christa said, "How many opportunities you gonna get to run in All-Star 5K?"  So we made our way downtown to the Kansas City Power & Light District where the race began and ended.

When we got there, we noticed many of the mascots from the MLB teams were on hand.  We saw the Blue Jay from Toronto, Homer from Atlanta, Captain - the horse from the Texas Rangers, Mr. Red from Cincinnati, and of course Sluggerrr - the lion mascot of our beloved Kansas City Royals.  After that we met our friend Christa and hung out chatting before the race.

Over the PA system, we heard that there were a few celebs (mostly former baseball players) at the event.  But Michael recognized the name Alison Sweeney ... who, I learned is not the wife of ex-Royals All-Star Mike Sweeney, who ironically was actually also there ... but rather the host of NBC's "The Biggest Loser".  We also heard the names of Royals Hall of Famer George Brett and 1985 World Series Star Willie Mays Aikens. With over 10,000 people packed into the Power & Light District, I figured there was no way we would see any of them - but at the starting line we saw George Brett, and at the finish line we ran into the others.  Being the total tourists that we are (even in our hometown) we of course snapped a few pictures.  Michael said that being pictured with Alison was awesome since she had never met a real celebrity before.

The race itself was fun, but pretty uneventful.  It was about 85 degrees at 7:30am so there three water stops and fire hydrants turned on spraying runners along the way.  The course routed us South by Crown Center, West past Union Station and The Liberty Memorial, and then North again back to downtown near I-35.  I love downtown KC!  We are not the largest city out there - but there are so many beautiful things to see.  We also noticed that since the All-Star Game is a world wide event, there were folks from everywhere visiting our city.  We saw jerseys from all over the baseball universe and fans from every culture.

There was a slight issue at the end of the race that was frankly hugely embarrassing for my hometown.  Apparently the organizers didn't plan for such a big bottle-neck of runners near the finish line, and there were so many people bunched up near the end that you couldn't even run across the finish line. We literally had to walk for about the last .1 miles of the race - shoulder to shoulder with other runners!  Huh???  You mean no one thought of that?  I guess not.  I've ran dozens of races and never seen that happen.  A race so bottle-necked at the end that you couldn't even run across the finish line.  It was just as crowded as at the start of the race when everyone has to walk to the starting line because of the huge volume of people.  Pretty embarrassing for the first event of the 2012 All-Star Festivities if you ask me. 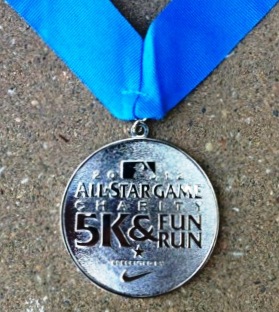 Michael and I didn't care about our finishing times - I just wanted to enjoy myself, and she had just PR'd on Wednesday at the 4th of July 5K.  But I'm sure a lot of people were running to beat the clock - and I'm sure they were pissed with not being able to finish!  But other than that, it was a pretty good race and we had a great time.

After the race, we grabbed our medals - which were really cool by the way - and headed back to Lees Summit for the rest of our workouts for the day.  I had a track workout and plyo to do later in the afternoon, hand Michael had a lot of pool sittin' to take care of (she's tapering for her half Ironman.)  I'm so glad we ended up running the All-Star 5K.  There were a ton of people, and a KCMO SNAFU, but it was a once in a lifetime experience and I'm glad we were part of it.  Go Royals!!!
... be great today!
Posted by Jim ... 50after40 at 12:58 PM