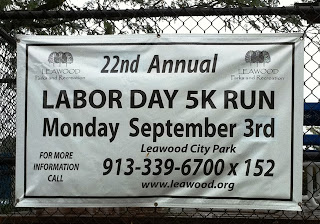 I've been stressing a little lately over the whole Project 3:09 thing.  I was training really strong for the first 8 weeks of the 16 week marathon plan, but the last two weeks have been horrible.   Two weeks ago I was forced to change my schedule a little due to out of town travel and it really sent me into somewhat of a downward spiral.  It shouldn't have affected me ... but it did.  And with this recent poor training period - little aches and pains have been popping up.  I've iced my left ankle for the last 6 nights.  My right groin feels like it's gonna snap with almost every step.  And my right butt cheek has started aching again.  It all goes away when I warm my body up and start running ... but I know it's there.

So, I needed something positive to push me through this tough phase of marathon training.  I needed something to prove to me that all of this hard work was paying off and I just needed to "stay the course".  And since the Spring, I had eyed the Leawood Labor Day 5K as just that race.  A nice Fall race to give me a benchmark as far as my current status.  Something I could use as a measuring stick.  If it went well ... everything would be fine!  But if I didn't run the time I thought I could ... hmmmm, well I didn't really wanna think about that.

So I went into the race this morning with 3 goals:  Finish the race healthy ... Set a Personal Best (even though I'm 43) ... and break the 6:00/mile mark for a 5K.  A secondary goal was to place in my age group.  But I had been told that this was one of the more competitive Fall races in the area with a lot of really fast runners.  So I knew an age group medal probably wasn't in the cards today.  The PR alone was a tall order, but I have been doing a Summer session of speed training with The Runner's Edge of Kansas City, a local running group.  If the race would have been two weeks ago, I would have felt great about my chances, but this morning ... my body was kinda "iffy".

The weather was perfect this morning ... well except for the FREAKING 92% HUMIDITY!!!  During my warm up miles, I knew it was gonna be a problem since my glasses were instantly fogging up and I was dripping with sweat at 1/4 mile in.  You just couldn't breath.  But the temperature was only 72 degrees, which wasn't bad.  Fortunately the course was nice and flat.  It was a simple out & back through Leawood City Park with only two turns.  Everyone I talked to who had ran it before said it was really fast, so I was hoping for the best.

For my warm up, I typically run one mile really slow just to get the blood pumping.  The next mile will be gradually faster ending at approximately marathon pace.  Then I'll do about a mile's worth of striders around 15-30 seconds slower than 5K pace.  I try to time it so I literally run right up to the starting line, and then start.  The less standing around the better so my heart rate doesn't drop too much.  I timed it about right this morning and felt good about where I was when the gun when off.

At the starting line there were several people I knew from class.  My favorite is Scott, a quite 41 year old guy from Overland Park, but he told me he lived in Lees Summit for a while.  We are in the same speed group in class and fairly close in ability right now - although he's a little faster than me.  I never race a specific person, but secretly I wanted to beat Scott at the 5K.  I told him after the race he was the only person I was trying to out run today.  It's good natured competition - both of us would be happy for the other one regardless of who wins.

When the gun sounded, I started a little too fast.  I got caught up in the dozens of faster runners flying by me. This was really unusual.  Typically it's the slower, out of shape runners who start really fast - but then you breeze by them at a half mile in as they're gasping for air.  But you could tell by the running form, singlets, and sleek runner bodies that these folks were pretty speedy.  There were only 399 runners in this 5K ... BUT 25 RUNNERS FINISHED UNDER 18 MINUTES TODAY!!!  I SAID 25 OF THEM!!!  So yeah, it was a pretty fast race. 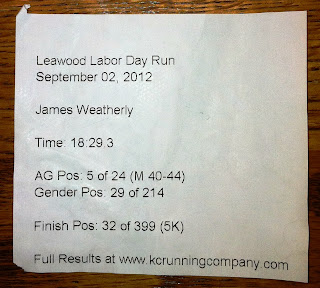 I hit mile one at 5:53, which felt pretty good, but I new I probably couldn't give much more than that.  At mile two, my stomach was beginning to ache a little and I noticed my pace dropped to 6:01, still not bad, but I needed to hold that pace and I didn't know if I could.  At about mile 2.2 my friend Scott passed me.  He didn't fly by me or anything - but definitely pushed past me.  I glanced over at him and his face looked like he was working pretty hard, so I thought he might fade a little at the end.  I stayed on his back shoulder for the next half mile.  But with about 1/4 mile left in the race he began pushing ahead and I couldn't keep up with him and longer.  I ran the third mile at 6:01 also, but Scott finished about 9 seconds ahead of me, 4th in our age group - I was 5th.

Typically for a race this small, 18:29 will place you fairly high among the finishers.  But when I looked at the posted final results, I saw that I came in 32nd overall and only 5th in my age group.  And I be lying if I said when I saw that I wasn't a little disappointed.  Sure it would have been great to take home a medal.  But I had ran a pretty good race and accomplished all three of my goals.  And its starting to look like some of the hard work this Summer is paying off ... mission accomplished so far.  Hope your running is going well too.
... be great today!
Posted by Jim ... 50after40 at 1:56 PM