Very Low Expectations
I went into the Marshall University Marathon a little overweight, a little out of shape, and a lot less prepared than usual for a marathon.  I had experienced my first real disaster of a marathon exactly 28 days prior at the Prairie Fire Marathon in Wichita, KS, and at this point I just wanted to get back out on a 26.2 course and run well, like I knew I could.  Overall I didn't feel too bad, but I could really tell that I had lost some speed and fitness, partly due to the minor tendinitis in my lower butt and upper hamstring on both legs I had been battling.  This is something that has typically bothered me on only the right side, but had recently moved to the left as well.  So I wasn't sure exactly how it would affect the race because I definitely feel it with almost every step.

Since I knew I wasn't in top shape, and I had some lingering soreness I was fighting through, I figured a PR was out of the question.  But the fact did cross my mind that only 6 weeks ago I was probably in the best running shape of  my life, so even if I wasn't still at that peak level, I should still be fairly decent ... right? 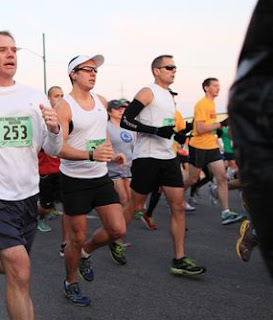 Preparation
There were basically only 4 full weeks between the Prairie Fire Marathon and Marshall.  To compound that short turnaround, I only got in 21 miles from Monday-Saturday following Wichita thanks to sore legs and recovery.  One of the workouts was a 10K, where I set my current PR.  Looking back, that race was a mistake.  It was really hilly on the back 5K and made my butt and hamstrings ache for the complete three weeks following ... which limited my running.

However, I WAS able to get in a 21 miler, and two 15 milers before the Marshall race, just to keep my body accustomed to the long distances.  But all three runs were well under the pace they should have been.  I also mixed in one Tempo Run of 12 miles with 8 miles at a 6:49/pace.  I felt like it kept me somewhat focused, but the pure volume I'm used to just wasn't there prior to a marathon.

Of course, this brings up the age old discussion of rest before a marathon.  I really planning on studying this a little more over the winter.  I obviously know and believe rest is a vital part a marathon training plan.  It's number one focus is to repair damage and improve health.  But I have also found that rest before a marathon slows me down.  Exactly how much?  I don't know.  But it has been my overwhelming experience in marathon training that I am ALWAYS faster the three weeks prior to a marathon, than I am on race day.  I know my legs don't get slower or weaker, but my cardio needs to be peaked for the race as well.  The taper period, for some reason, really seems to sabotage that element of my marathon fitness.

And then there was my diet.  Let's just say I pretty much let myself go.  Michael and I enjoyed Mexican several meals during this abbreviated 4 week marathon prep.  I just simply didn't care and ate pretty much everything in sight.  I knew I was gaining a little weight, but it just didn't bother me.  As a result, I was about 7-8 pounds heavy for this race - but it was nothing to lose sleep over.  I DID keep up with my core workouts for the most part, skipping a couple, but overall my core strength felt good.

In training for Wichita, I had eaten very few pizzas, but for my prerace nutrition and carb loading, the couple of days before the race, I ate two pizzas, pasta, and quite a bit of protein.  I just felt like for most of my Prairie Fire training I was not getting enough calories, and for this race I didn't want that to be a problem - so I kind of overstuffed.

It Was Textbook Me

I've always ran my best when I take 3-5 miles to warm up and really ease into the pace, building toward the later miles.  And the Marshall University Marathon was a perfect example of why this works for me.  I ran the first half much slower than the second.  But in races where I've been trying to PR, the challenge has always been not leaving too much time on the clock.  At Marshall, my negative split was a little too big for a really fast race.  Typically I wouldn't wan't a 25 second difference in pace.  But considering I still felt great at the end of the race, and had plenty of energy to burn, I felt pretty good about it.

The best thing about the race on Sunday was I just never really pushed the pace at any point.  I made a conscience decision to not look at my Garmin and just run by feel.  This was a good thing, in that I was happy I could run an "almost PR" by simply running on feel and not pressing the matter too much.  But conversely, not frequently checking my watch left me very unaccountable to the pace.  When I run a timed race without monitoring the pace, my body is gonna automatically do what feels comfortable, and I probably won't run nearly as fast as I could have.  But that's fine!  I had made up my mind before the race to just accept whatever happened.  And running a 3:20 with something not even close to max effort felt really encouraging.

The only time I really pushed the tempo was at mile 25.  Until I got lost on the Marshall Campus during the last mile, I was at about a 6:55 tempo.  (I've gotta be the only guy in history to get lost on this small Campus) When I noticed I was off course, I really slowed down and almost stopped and looked around.  It cost me about 30-40 seconds before I eventually the remaining course again.  As I ran to the finish line at pretty much top speed, I remember thinking, "Man, my legs really feel good".  The fact that I had enough energy for a sub 7 minute mile on 25 is also a great indication of just how much energy I had left in the tank.

The only other thing that seemed to be "Textbook Me" was that I ran 26.4 miles instead of 26.2.  Two extra tenths is like almost one more time around the track at the end of the race while the clock keeps running.  26.4 miles in 3:20:42 is actually a 7:36 pace, which is a little discouraging when I look at my "official pace" of 7:40.  I really try to focus on the tangents in a race, but just can never seem to make it to Point A to Point B in a straight line.  If I could somehow master this little secret, my marthons would instantly get faster without running any harder.

All Things Considered ... It Was My Fastest Marathon
The clock read 3:20:42.  And to be honest there was a part of me that was a little disappointed after all of the hours I had spent training this summer.  I thought I might be able to run close to a 3:15 at Marshall.  But when I really look closely at the numbers and honestly evaluate how I felt physically after the race, I think I ran a lot better than the time indicated.

Even though I have the world's smallest bladder, I usually don't pee during a marathon.  But for some reason at Marshall, it was like Niagra Falls.  According to my Garmin, I lost almost 3 minutes of "non running time" during the two different pee stops at miles 3 & 12.  I also lost about 30-40 seconds at the end of the race due to the course mix.  If I could take this additional 3:30 off of my time, I would have been around 3:17 for the race, which would have been a PR by 3 minutes without peak exertion level.  Granted, Marshall is probably the world's flattest course, and we had the best temperature day ever, but still it was a good run.

The bottom line is, I could play the woulda-shoulda game all day ... and your finishing time is basically your time.  But it was very encouraging to run as fast as I did with less than max effort.  Plus, my legs felt amazing the next day.  My hamstrings were a little sore, but overall, I could have easily ran again if it weren't for the drive home.  So all in all the long summer of training wasn't a total loss.  I'll hit it hard again soon and get a PR ... I'm just not gettin' any younger!
... be great today!
Posted by Jim ... 50after40 at 7:01 PM