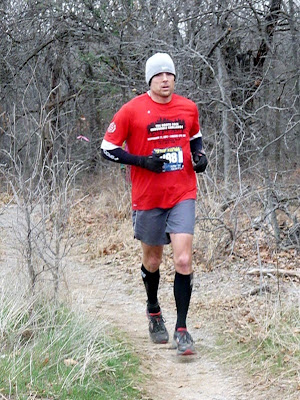 Training
I can't say that I "fell in love" with utra-marathon trail race training.  In fact, I thought it kinda sucked.  I know a lot of folks enjoy long lonely runs in the woods, but they're just not for me.  Most of my key training for this race was spent on back-to-back long runs every weekend.  Those runs typically took their toll on my legs, so I drastically cut back my typical mileage during the week.  A typical week looked like this:

Throughout the training I maintained my morning core workout fairly consistently, and tried to mix in some afternoon/evening workouts here and there. But for the most part, the back-to-back long runs weekend after weekend really wore me down, and I really just used the midweek for rest.  Here are my back-to-back long runs leading up to the race: 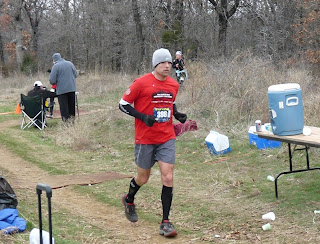 The mileage during this period was considerable, but it wasn't "over the top".  A typical week would be about 73 miles.  But the thing that made it bearable was the speed.  All of the long runs were completed at approximately 9:15-9:30 pace, not counting the stops to refuel.  And would I typically do one light speed or tempo workout during the week just to change it up a little.  But if I do an ultra again (which I'm sure I will at some point), I will add a little more tempo work during the week to try to maintain a little speed and add quicker leg turnover.

Pre-Race
Because of getting to Tulsa a day early due to my grandmother's funeral, we had a full day to basically relax and do nothing.  This kinda echo'd the week leading up to the marathon where I only ran a total of 10 miles on three different days.  But a few of the ultra plans I studied suggested no mileage the week before.  And even though I gave my legs a little more rest than normal, I was pretty fresh at the start without feeling groggy or sluggish.

I really ate fairly light the week leading up to the marathon and energy-wise, felt pretty good during the race.  I've been trying a new nutrition approach the last few races that really seems to work well.  On Sunday through Thursday, I'll really back off quite bit and not take in as many calories.  I don't starve by any means, but I might eat more salads than normal and really cut back on carbs.  Toward the weekend, typically two days before the race, I'll start to increase my calories again.  For example, this is what I ate the two days prior to the Snake Race:


Race, Pace, & Nutrition
The race consisted of a 2.1 mile out & back trail course for a total "loop" of 4.2 miles.  And other than crossing a very small stream twice, and a few rocky areas, the course was mostly dirt and not very technical.  It did, however, "snake" back and forth with a series of switchbacks, which is where the course got it's name "Snake Race".  For a 6-hour period, we basically just ran as many loops as possible.  Toward the end of the race, if you couldn't make another full 4.2 loop, you ran a separate 1/2 mile loop over and over until the end.  I ran 8 full 4.2 mile loops, and 6 finishing 1/2 mile loops for a total of 36.6 miles in 5:57:24.  I ha to stop short of the 6-hour mark because I couldn't make another complete 1/2 mile loop in the remaining 2:36.

I was committed to not going under 9:00/pace for the first several miles of the race, but in typical "Jim thinks he's bullet-proof" fashion, I bolted right out of the gates a little too fast for a 6-hour trail race.  It felt smooth.  And I wasn't laboring at all.  But since we had 24" of snow in KC for the better part of the previous month, most of my trail running had given way to indoor track workouts.  And before long, the additional beating your legs automatically take on a trail caught up with me a little earlier than anticipated.

You can tell by the race splits at the right that seven out of  my first ten miles were 8:39 or lower.  Going into the race, I figured that at best I would average right around 9:00 for the race.  So starting this fast proved that I was basically very undisciplined and a little out of control for the first ninety minutes.  After that I seemed to settle into a fairly smooth pace.

I took a lot of stops in this race, maybe too many.  It really cost me a lot of time.  My overall average pace for the day was 9:52, which is decent for my first ultra.  However, take out all water and pee stops and my over average running pace was about 9:17.  As I looked through my race splits, I cold tell exactly when I stopped, which was almost every two miles.  Those miles all had 2-3 more minutes than the others that were spent entirely moving forward.  That's not to say that I could have ran the whole thing without stopping.  But I definitely took my time during stops and made sure I was fully recovered before starting back on another loop.

My personal goal for the race was between 38-40 miles, and I ran the first 19.8 miles in 3 hours.  I knew that I most likely wouldn't be able to keep that pace over the second 3 hours, but I dug in and held on as long as I could.  Since the 3-hour racers were on the course with us during the first half, most of the time flew by.  But during the second half, it got pretty boring.  You saw the same few people over and over, and much of the time over the 4.2 mile loop, you ran by yourself with no one else in site.

One of my main concerns for the race was getting enough fuel.  I had been as far as 4:45 in training with no trouble, but I didn't how my body would react in that last hour.  For most part I did okay.  Actually, I would say that my stomach had almost no issues all day, which was great.  I discovered that bananas and salty Lay's potato chips seemed to be the perfect combination in training ... and I kept my system full of them all day.  I also had three gels with caffeine.  For the most part I took water and Gatorade at every stop.  I've never used salt tablets for running, but I noticed during training that if I didn't take in enough salt on long runs, I started to get light headed.  I did some reading on it and salt helps level out your electrolytes.  If I started getting light headed, I would pop a few salty Lay's potato chips and I felt better almost instantly.

Besides some heavy legs during the second half of the race, everything was going relatively well until I hit mile 29.  That's when my lower quads started cramping.  It wasn't horrible, but it definitely hurt and slowed me way down.  Mile 29 was my slowest mile of the race at 13:31, but I kept stopping to try to get rid of the cramps every few hundred feet.  Until that point, I hadn't walked because I had to, but the cramps forced me to a stand still for a few seconds.  Luckily, I had put "The Stick" in my drop bag, and it was waiting for me at the start/finish area.  It was huge for me during the race - I literally don't know how much longer I could've gone without it!  I carried the last full lap of the race, stopping occasionally to roll out my cramping muscles whenever necessary.  I mostly blamed the fast start for using a little too  much of glycogen ... but it may have just been because I was on mile 30 and it was fairly chilly. 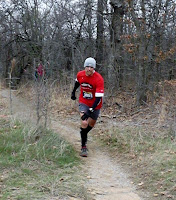 We've go one of those cameras that take frame-by-frame fast photos for action shots, and Michael caught me almost falling for the 3rd time of the day near the finish line ... that would have been one of my most embarrassing moments

At about mile 31, and later in mile 32, I fell for the first time during the race.  I had seen several other people falling all day and had considered myself fairly lucky.  But  my legs were just so heavy and at that point I was probably concentrating more on the cramping, than the actual trail.  Up until the point where I fell, I was kind of in a daze, just trying to focus on the pain in my quads and the finish line, which was still about an hour away.  But the two falls, which luckily didn't hurt anything, really woke me up.  It made me refocus on the course - but by then I was more than ready to be done.

When I completed my eighth full loop, I decided that I probably had enough time for one more if I pushed it, but I didn't think I could make it the whole way if the cramps persisted.  So I opted for the 1/2 mile loop.  Technically, it was MUCH tougher than the full loop.  There was much more elevation to overcome and almost the entire thing was rock covered.  I was a little worried that I would bite the dust again, and this time it could be a problem.  Fortunately I didn't fall ... but almost.  I was picking up speed over the last three miles and getting a little careless.  As I came out of the trees with the finish line only about 50' away, I started to waive at Michael for a finish line shot.  When I did, I stumbled and just about fell again for a third time, right in front of the finish line.  That would have been humiliating!  Fortunately I stayed upright and finished the race.

Later that night as I tried to recover, my legs didn't feel too bad, but my stomach was really uneasy.  We went out for a celebration dinner, but all I ate was half of a hamburger and a few fries.  But other than that, the race was a huge success and I came out of it relatively unscathed!  It will probably be a while until I run another distance greater than 26.2, but I'm glad I had this experience and felt like it went fairly well for my first real trail race.
... be great today!
Posted by Jim ... 50after40 at 4:46 PM