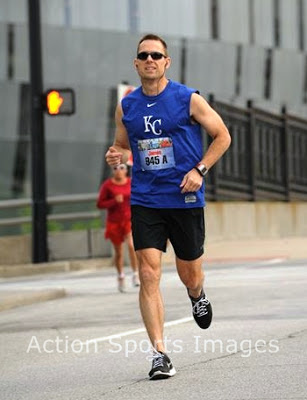 Since the race is always ran in early June, at times it can be a little hot and humid.  But on Saturday, the weather for the race couldn't have been better.  It was a perfect sun-drenched 65 degree June morning with bright blue skies. We simply couldn't have asked for better running conditions!

Neither of us were in peak condition for this race, which both of our times reflected. But there's nothing better than running a race with your wife on a perfect summer morning.  Plus, it's just such a beautiful course with great volunteers and participation, running it is always fun regardless of the finishing time.  And like most races in your hometown, there's usually an opportunity to meet and hang out with friends before and after the event ... which we did!

The race begins and ends at the beautiful Crown Center area of downtown Kansas City.  Crown Center is a shopping center with upscale shops and restaurants overlooking a beautiful outdoor court yard, complete with one of the famous Kansas City fountains - of course!  The "Hill" in Hospital Hill is for a two-mile square area just South of Downtown KC that's home to various medical facilities including Truman Medical Center.  The race isn't the toughest one I've ever ran, but mind you, it's challenging.  The climbs begin almost immediately with 100-200 ft ups and downs.  For me, the hardest part of the run is from miles 10-12.  It a two-mile gradual uphill stretch of about 190ft beginning on JC Nichols Parkway along the Plaza, and ending headed North on Broadway Street.   It's a really beautiful part of the city, but all I could think about was, "When is this hill gonna end???"

Probably the best part of the race is when you hit mile 12.5 just on the West side of the Federal Reserve Bank on Wyandotte Street.  At the top of the final 50ft hill, you get a great view of downtown Kansas City, including the Liberty Memorial.  Plus, the last half mile is a straight downhill shot to the finish line.

I knew going into this half-marathon that it would be a little bit of a struggle.  Since my half-marathon PR about a month ago at Indy, I really had shut most of my training down, and unfortunately really struggled with my diet. Standing at the starting line, I was about 8 pounds over weight, and my legs had lost a little strength.  So I decided to just run it comfortably and have fun.  I pushed it a little toward the end of the race, but overall, I just kinda ran the downhills fast, and took it easy on the inclines.

For some reason, there was a guy, probably 25 or so, running directly behind me starting at mile 10.5.  He was so close that if I looked to the right or left I couldn't even see him out of my peripheral vision.  It was like he was drafting me, and literally he was only about 3 feet behind me with every step.  It was so annoying.  I moved over to both sides of the street repeatedly and waved him around, but he just stayed right there ... being a real a-hole.  At about mile 12 he made his "big move" and moved passed me like we were racing or something.  I wasn't.  We weren't really running "that" fast, but I could tell he was really laboring ... like beating me was his life's mission or something.  I swear I had never seen this dude before in my life.  So just to mess with him, I really sped up over the last half mile and jetted past him, and I mean jetted.  My last mile of the race was 6:19, but the last half of that mile was paced at around 5:19.  I looked back at the finish line and I couldn't hardly see him, ha.  Kids ... whatever bro. 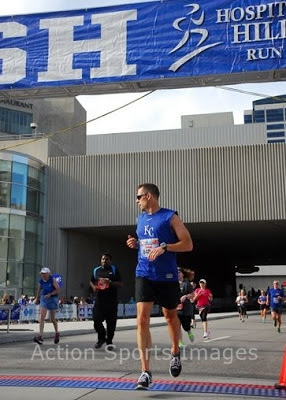 Even though I pushed my pace a little over the last couple of miles, it was still my second slowest half-marathon to date.  My race splits were all over the place and really nothing to write home about ...

Plus, I stopped at the last 4 or 5 water stops and visited briefly with the volunteers, probably adding about about 2 minutes total to my time.  If I'm not trying to PR, I'm just not that concerned with my time.  But it was nice to have a solid race on those hills.

After the race, there was beer and BBQ included with your race fee.  Neither sounded that good at 9:00 am, although apparently I was about the only person at the race with that thought because the line wrapped around the block.  We met up with some of our running friends and then headed home ... for a knee-high lawn that was waiting for me after all the rain this past week.  All in all it was a great morning of running and hanging out with friends.  I'm sure we'll be back for the 41st annual race next year!
... be great today!
Posted by Jim ... 50after40 at 12:58 PM