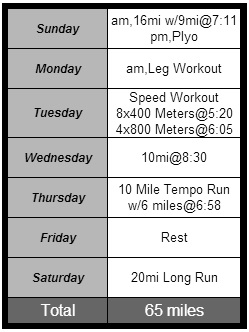 We still have 10 full weeks until the Chicago Marathon, so I'm really not trying to kill it in my workouts yet.  But this week was a very positive step in that direction.  The temps have been nice, but the humidity has been consistently over 90% when I've ran, making it very tough to breath ... which is great for training.

Some of the highlights for the week were a very good Speed Workout on Tuesday evening in sweltering humidity.  I ran it with my friend Jeff and felt pretty good about the intervals. Also, the Tempo Run on Thursday morning in Omaha, NE wasn't bad either. It was 10 miles total with 6 of them at a very manageable 6:58/mile pace.  I'll sharpen that time quite a bit in future Tempo Run's, but for now I felt great about how easy it seemed in really muggy conditions, as well as on some rolling hills.

The long run on Saturday could have been a little better, but all in all it was okay.  Again, it was a nice, cool 65 degrees ... but with 94% humidity.  In that kind of dampness, every thread is literally soaked through by mile 4 or 5.  It really depletes your fluids and saps your energy.  My friend Jeff, is also training for a marathon, but hasn't built the mileage I have to this point yet.  I think the 20 miles really challenged him.  We had to stop and walk a few times, and overall the pace was a little slower than I planned.  But it was really no big deal.  At this point, I'm still trying to build back my mileage base and the times on the long runs aren't as important as they will be when we get closer to the starting gun.  Probably about 7 weeks out, I'll really start locking the pace in.  But since we ran slower, today's 20 miles really came fairly easily, all things considered.  (Well, as "easy" as 20 miles can be)

The most encouraging thing about the training to this point is how easy everything has been so far.  Like I've said several times, I'm really trying to hold back a little this year and not burn out before race day.  That being said, I'm running faster and longer with less effort than I was at this point last year in my training.  I probably won't really start ramping up the intensity for a couple more weeks, but then ... it's on!  Hope your running's going well - have a great weekend!
... be great today!
Posted by Jim ... 50after40 at 11:29 AM