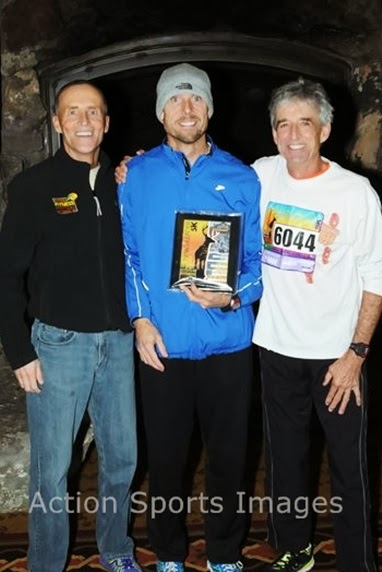 Dick Beardsley, me, and Frank Shorter just hangin' out at the awards ceremony for the Bass Pro News-Leader 5K this past weekend.   AWESOME!!!  What an honor to be presented an age group award from these two living legends!

Dick is probably best known for "The Duel In The Sun" at the 1982 Boston Marathon where he finished second against Alberto Salazar.  It's still known as the greatest Boston Marathon finish of all time.  Also, his 2:09:37 at Grandma's Marathon, set in 1981, has stood as the course record for 33 years.  Frank, of course, is the 1972 Olympic Marathon Gold Medalist for the United States.  He also won silver in 1976 where he lost to Waldemar Cierpinski who was later implicated in the East German doping scandal ... so basically he SHOULD have had two gold medals.  Frank is also known as the father of modern distance running in the US, and credited for starting the great running boom in the 70's.

All I can say is it was completely humbling, and the opportunity of a lifetime to get a photo with these two greats.  AWESOME!!!
... be great today!
Posted by Jim ... 50after40 at 3:09 PM