(Thank you for all the kind words of congratulations and encouragement after my last two  posts.  They really meant a lot!   As always, this post is just for my notes and future reference.  Feel free to read if you want ... but it's just a bunch of stats & data for nerds like me ... probably not that exciting.  Thanks again!)


Overview
Legs felt really dead the 10 days leading up to the race.  So I opted for additional rest and only ran a total of seven miles the week before.   The rest was a good choice.   It took me a while to get "right" during the race, but at about mile 7 or so I started feeling good and was able to manage a 7:05 pace for the last 20 miles of the race.  Probably the smartest, best, and most enjoyable marathon I've ran in terms of my personal performance.  I would take a lot to top my Boston Marathon experience, but this one is close. 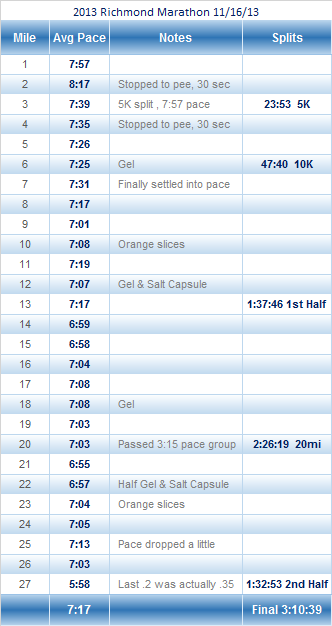 Training
Starting with the Chicago Marathon five weeks prior, following are the key workouts leading up to Richmond.  Of course there were a few light recovery runs sprinkled in as well.  In the condensed time period, the challenge was trying to stay sharp and conditioned, while giving my body adequate rest for Richmond.  Probably could have used one or two more days of rest, but it worked out okay.  Also, really liked the 18+4 approach to a long run.  I'd done several double runs in the past, but that was the first double after a long run:

Race Week
Ran 4mi on Wednesday, and 3mi on Thursday, plenty of rest and stretching all other days before race
7 miles total

Nutrition
I managed my diet fairly well the weeks leading up to Richmond.  Other than a few days of "celebration" after Chicago, for the most part I kept my weight at race level around 170.  I've really been able to keep weight off by going almost completely "No Bread/No Sugar".  I've found that if I try to stay away from gluten products, especially bread, and eliminate as much added sugar as possible, I'm a lot lighter and feel much better on a daily basis. Sometimes it's a challenge, but it's becoming more and more a part of my everyday life without thinking about it too much.

Since my body was a little depleted from the Chicago Marathon, I focused a lot on healing foods geared toward reducing inflammation and repairing muscle.  I ate a ton of blueberries and spinach, and also added more protein than usual with a ton of eggs, chicken, salmon, and occasional steak.  I also added 8oz of beet juice about 3-4 times per week.

The  two days leading up to Richmond I really tried to increase my calorie intake.  I was running a pretty good race at Chicago until I started to fade at 22 and crashed pretty hard at 25.  At first I thought it was simple race fatigue and lack of conditioning, but based on everything I read after the race, I began to think it might be calorie intake ... or lack of.  So for Richmond I ate quite a bit more than I had for previous races.

I added the bulk of my calories on Thursday while we were traveling to Richmond.  I actually ate a steak and sweet potato for lunch, with a turkey sandwich and spinach salad for dinner.  But the rest of the day was filled with carb intake supplied mostly from dry steel cut oats, several bananas, and sports energy bars for carbs and sugar.  I also drank two 8oz bottles of coconut water for added electrolytes, and an 8oz cup of beet juice.  It may have been too much food because I had a little trouble sleeping that night with a churning stomach.

On Friday, I continued the same basic plan, but lightened up a little.  I focused mainly on plenty of water and steel cut oats.  I had a chicken & spinach salad for lunch, and a nice marathon buffet at the hotel for dinner.  It was filled with chicken, salmon, green beans, garbanzo beans, rice, and bread.  I went to bed feeling pretty full on Friday night, but not as bad as Thursday.  I had fueled up a lot more than I typically did, and frankly I wondered if it was too much.  I felt like I had enough food in me to avoid a crash, but I was a little concerned about GI problems.  They typically never bother me too much, but I had really eaten a lot.

I also changed up my in-race nutrition by adding an extra gel and taking them earlier in the race.  I took a Roctane gels w/caffeine at miles 6, 12, 18, and a half at 22.  I also took salt capsules at miles 12 & 22.  The temperature was only 50 degrees, but I felt like I was losing a lot of fluids.  I'd planned on taking one at 10-12ish, but felt a little fuzzy headed at 22, so I took one then too.  Salt caps really seem to clear the cobwebs in a race fairly quickly.  I've become a fan of them.

Form
My form was pretty good all day, and I never really had trouble maintaining it.  The only thing I need to work on this winter is the continued evolution of my foot strike.  I seem to land on the outside of my foot way too much.  This is particularly evident in my right foot strike.  I don't really heel strike that much anymore, other on steep downhills when I'm tired (i.e. ... this race), but I still seem to "reach" a little too much when I extend.

Pacing
It took about 5 miles to get completely loose in this race, and I really didn't "feel great" until mile 7.  I wasn't that concerned about pace at the outset, in fact I stopped to pee twice in the first 4 miles.  But around mile 7 I began to focus a little more and push the pace.  Around mile 8 I started running at marathon pace of 7:00ish for the first time during the race.  Probably the best thing I did all day related to pace was not stress about it.  If I hit the split ... fine.  If I didn't ... that was okay too. I was just trying to let the pace "happen" without staring down my Garmin too much.  I was of course aware that I was right around my targeted pace, but I didn't dwell on it.

I also made sure to take it easy and back off a little on some of the rolling hills.  It slowed me a little, but it really conserved a lot of energy.  I really learned this lesson at Rock The Parkway earlier in the year.  I use to try to hammer hills and maintain pace.  That's fine in a short race like a 5K, but it will really wear you down in the longer ones.  I found that you might lose a few seconds off of the mile split, but you gain it in the energy you save.  For example, if you're averaging a 7:00 mile, and have to slow to a 7:15 pace on a half mile long hill, but then regain your pace after that.  Your total time for that mile, with hill included, will only slip to about 7:07 or 7:08.  Slowing a little on hills doesn't wreck your race.  Plus, at times you can accelerate a little on the downhills.

I had a minor distraction in the middle of the race about mile 15 or so when the moleskin I wear on the right ball of my foot for added cushioning broke lost it's bond with my skin because of the wet course conditions and my soaking shoes.  The piece of self-adhering padding slid down and started "sawing" into the side of my big toe and after the race I found a blood blister the size of a quarter and about a quarter inch tall.  It wasn't that big of deal, other than it hurt and became somewhat of an annoyance.  Fortunately, I didn't have to stop for it.

I never really remember having to "grind" at Richmond.  Most of the miles came fairly free and easy, and without much stress.  I of course had to focus, but the rain and mist gave me something to think about other than the pace.  I knew at mile 18 I had a fairly strong finish in me.  And at mile 20 I caught and passed the 3:15 pace group without much trouble.  That REALLY gave me a boost.  My next two miles were the two fastest of the day at 6:57 and 6:58.  At that point I really began focusing on reeling in the emotion. I didn't want to get too excited and burn out before the finish, so I began dialing it back a little.  Every time I looked down and saw 6:55 or below on my Garmin, I made a conscious effort to slow down.

Mile 25 was the toughest of the race.  My stomach began to speak to me a little, and of course I was pretty fatigued.  The typical thoughts of stopping to walk crossed my mind, and my pace dropped a little during this mile.  But I kept telling myself to just make it to the downhill about halfway through mile 26.  When I made the final turn onto 5th Street with about a half mile to go, I could see the course drop over the horizon.  I knew I was home free.  I was able to hold on and when I hit that final stretch and finished strong with no cramping, aches, or injury.  And a new PR of 3:10:39!!!

Conclusion
Running less overall this year, but spending more miles at marathon pace has been the biggest difference in my faster times.  I just really prepared my body to spend extended time at those race paces.  Also, a better diet on a daily basis, and adding more food the two days before the race really seemed to prevent the crash.  Note to self ... This is the formula for your success ... FOLLOW THIS PLAN DUMMY!
... be great today!
Posted by Jim ... 50after40 at 7:00 AM