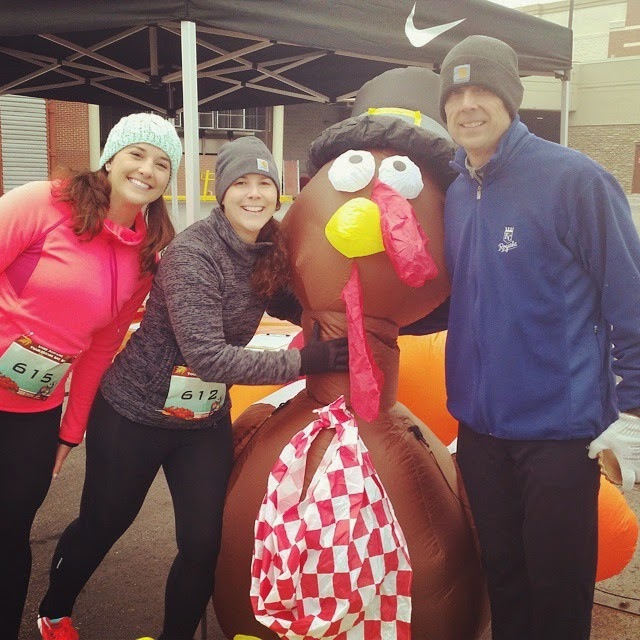 "Don't come back to the car if you get beat by a turkey!" was the last thing Michael said to me before we parted ways for the Ward Parkway Thanksgiving Day 5K.  I thought she was surely kidding, but based on the amount of ridicule she gave me after the race, I'm not quite sure.  The event has become our annual Thanksgiving morning tradition, and is ran on beautiful (and somewhat hilly) Ward Parkway, at the Ward Parkway Mall in Kansas City, Missouri.  It's our favorite holiday race by far and one we look forward to every year.

And as a special treat this year, Ashley, our niece joined us for the chilly run.  At about 26 degrees at 9:00 am, it was the coldest Thanksgiving 5K that we've ran together.  But since there was no wind, it wasn't too bad.  It just takes longer to get my old legs loose and stay warm when the weather's cooler. Plus, it was cloudy, which always makes it seem colder than it actually is.

Also this year, the race featured a Turkey Throw-Down.  Sound ominous, right!  Anyone who beat Ward The Turkey (a guy running in a turkey costume) ... and finished in less than 20 minutes, was the winner of the Turkey Throw-Down and received a special shirt at the finish line.  Based on my current lack of conditioning, I had serious doubts as to whether I could run a 5K in less than 20 minutes.  I thought I would be close, but the Ward Parkway course is downhill for the first mile, and then an incline for the remaining two.  If the race were flat, I thought I could probably run around 19, but with the rolling hills I wasn't sure. 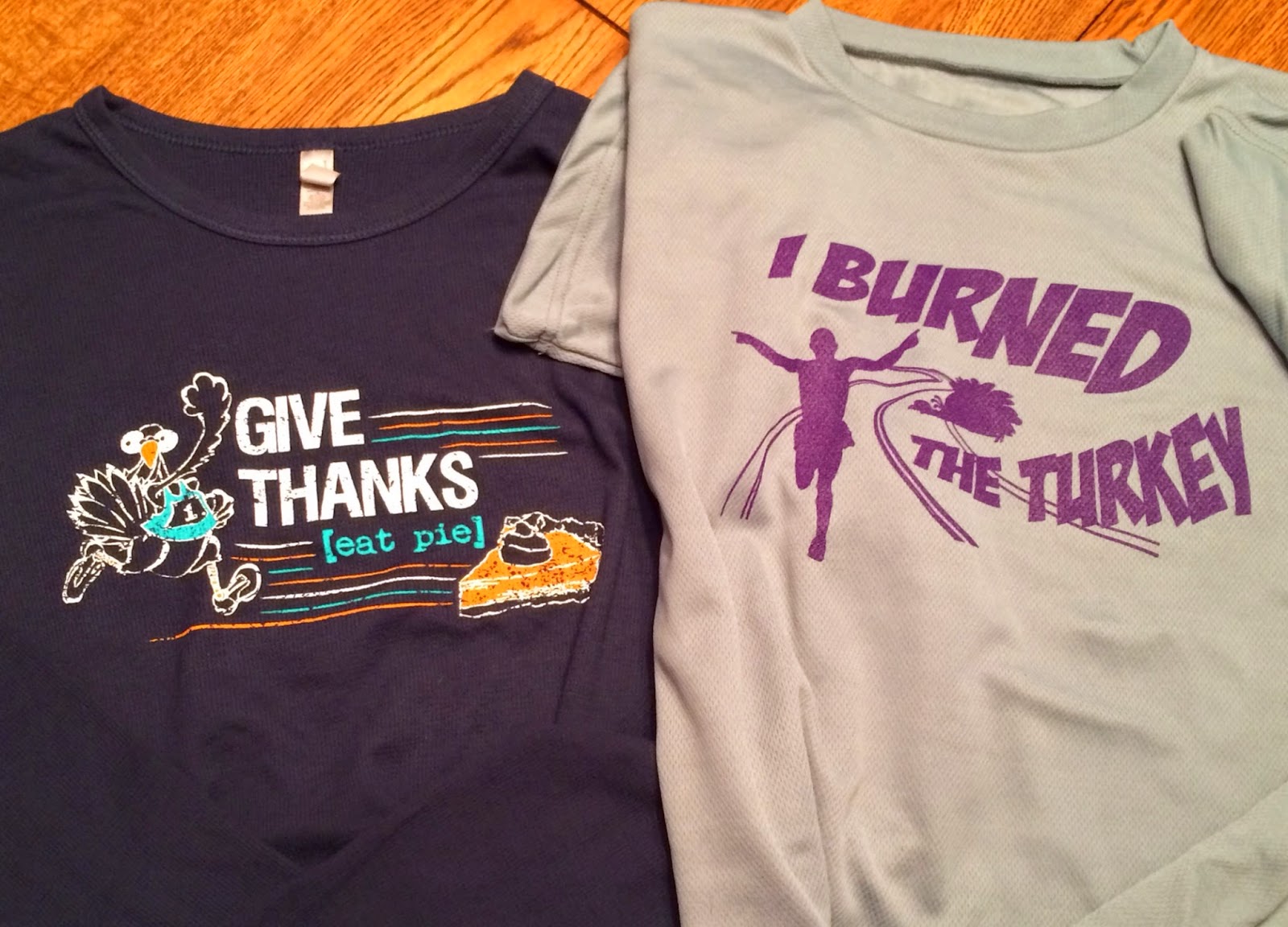 After about a 25 minute warm-up, the gun sounded and I settled into a comfortable downhill pace of 6:15 or so.  I really wasn't pushing it, and I was surprised at how easy the pace felt.  In warmer weather, I think I could have easily been close to 6:00 for the first mile, but on Thursday, I hit the first marker at 6:18 ... not bad.

Mile Two begins basically a two mile grind of an overall gradual incline, mixed with rolling hills.  I knew that to come in under 20 minutes, I had to be at 6:27, so I started doing the math in my head.  I was basically 9 seconds fast on the first split, which meant I could dial it back a little on the second mile, which I did.  The middle mile of this race is all uphill.  It's a gradual uphill, but it wears on you. I felt great as I slowed my pace a little and thought I was handling the run fairly easily.  But at the marker, my split was 6:32 ... which now meant I had to hump it a little.

Somewhere during Mile Three, the previous months of little-to-no conditioning ... and ABSOLUTELY no uphill running ... took it's toll.  I was really beginning to suck wind.  Plus, as I neared the final turn, about a quarter mile from the finish line, I saw Ward The Turkey about 200 meters in front of me.  I was losing to the Turkey!  This harsh reality made me really begin to dig a little.  I was starting to feel a little gassed, even thought the pace was much slower than a typical 5K.

As we came over the last hill for the final downhill stretch of the race, I could see the finish line clock in the distance.   I figured that my finishing time was probably going to be around a respectable 19:40 or so ... but as I watched the seconds tick away, I could tell I was right up against 20 minute Turkey Throw-Down cutoff, and I started to sprint.  As I started to hit my final stride, I could see that I was closing in on Ward The Turkey ... but he crossed the line right in front of me as the clock hovered around 20 minutes.  We'll get the race photos in a couple of days, and I hope I'm crossing the finish line with a turkey ... THAT would be awesome! 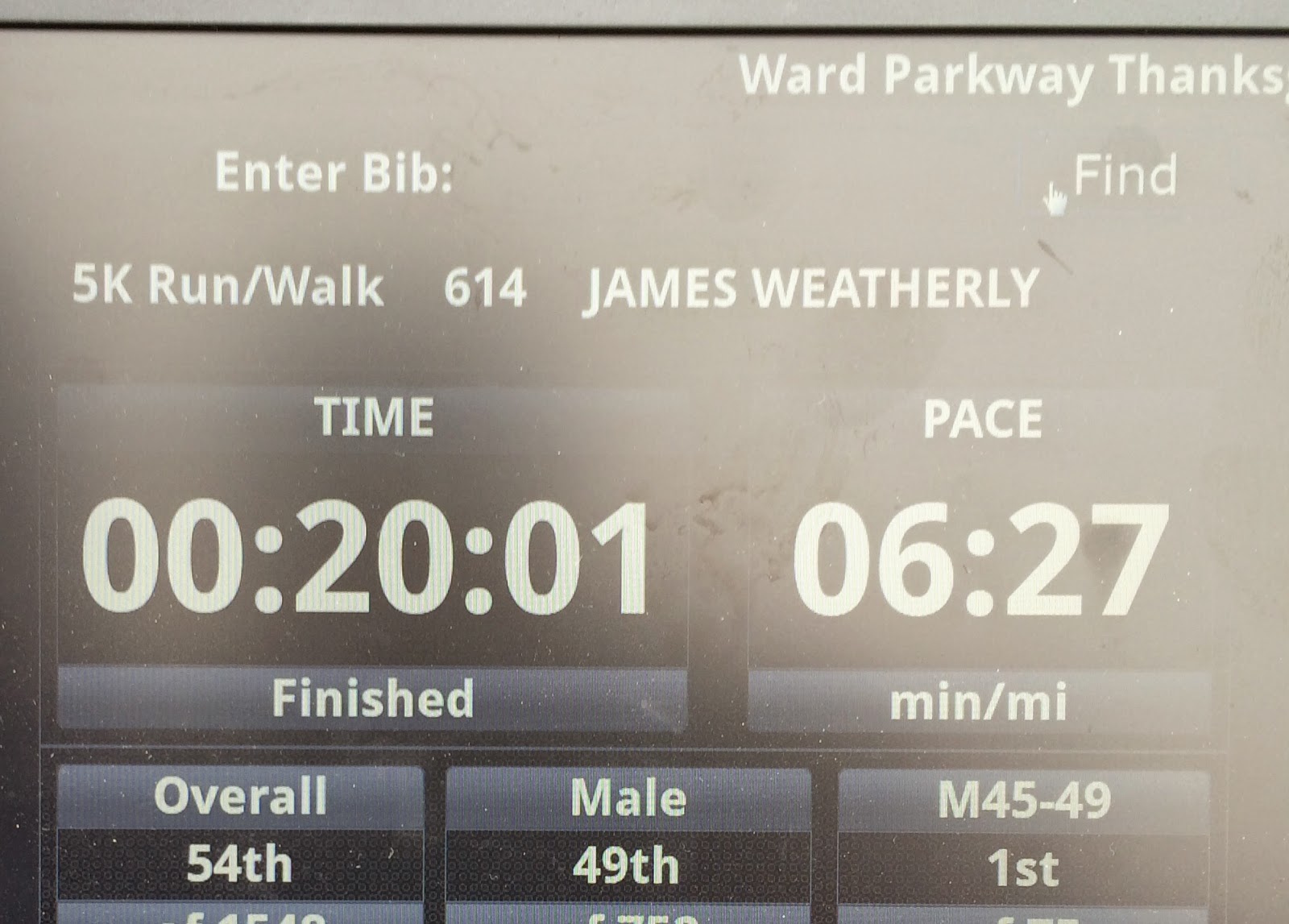 I figured that I came in right under the qualifying time, and a lady at the finish line said congratulations and handed me a Turkey Throw-Down shirt that read "I Burned The Turkey", haha, pretty funny.  I got a drink, grabbed the pumpkin pie that all finishers received, ran to the car to change clothes, and then came back to the finish line area to wait for Michael and Ashley.  While I waited, I went over to the results table and started laughing as soon as I saw my results ...

... ONE SECOND ... the turkey had actually beaten me by one lousy second.  Michael was never going to let me live this down.  Plus, I had actually collected a Turkey Throw-Down winner's shirt for a challenge I hadn't completed.  I thought about giving it back but it was already in the car ... so I kept it, ha.  But I DID win my Age Group and get the most awesome hand made ceramic medal ever.  It looks like an ash tray with a turkey stamped on the inside.  Only the first place winners got the "medal" so it was really awesome!  Plus, I got a $25 gift card to Gary Gribble Running Store, so now I guess I'm actually classified as a pro since I got paid, ha.

All in all I wasn't upset that a turkey beat me, I was just disappointed that my fitness level has dropped to the point that I can't run a sub 20 in a 5K.  I mean, just this past summer I ran an 18:21, and felt like I could have ran close to 18 a month later.  Undoubtedly on a flat course it would have been no trouble to come in under 20 today, but that's no excuse.  The bottom line is that I've got to get my lazy butt going again and get back in shape ... right after I finish this delicious pie! Be thankful for everything wonderful in your life today!  And ...
... be great today!
Posted by Jim ... 50after40 at 2:29 PM