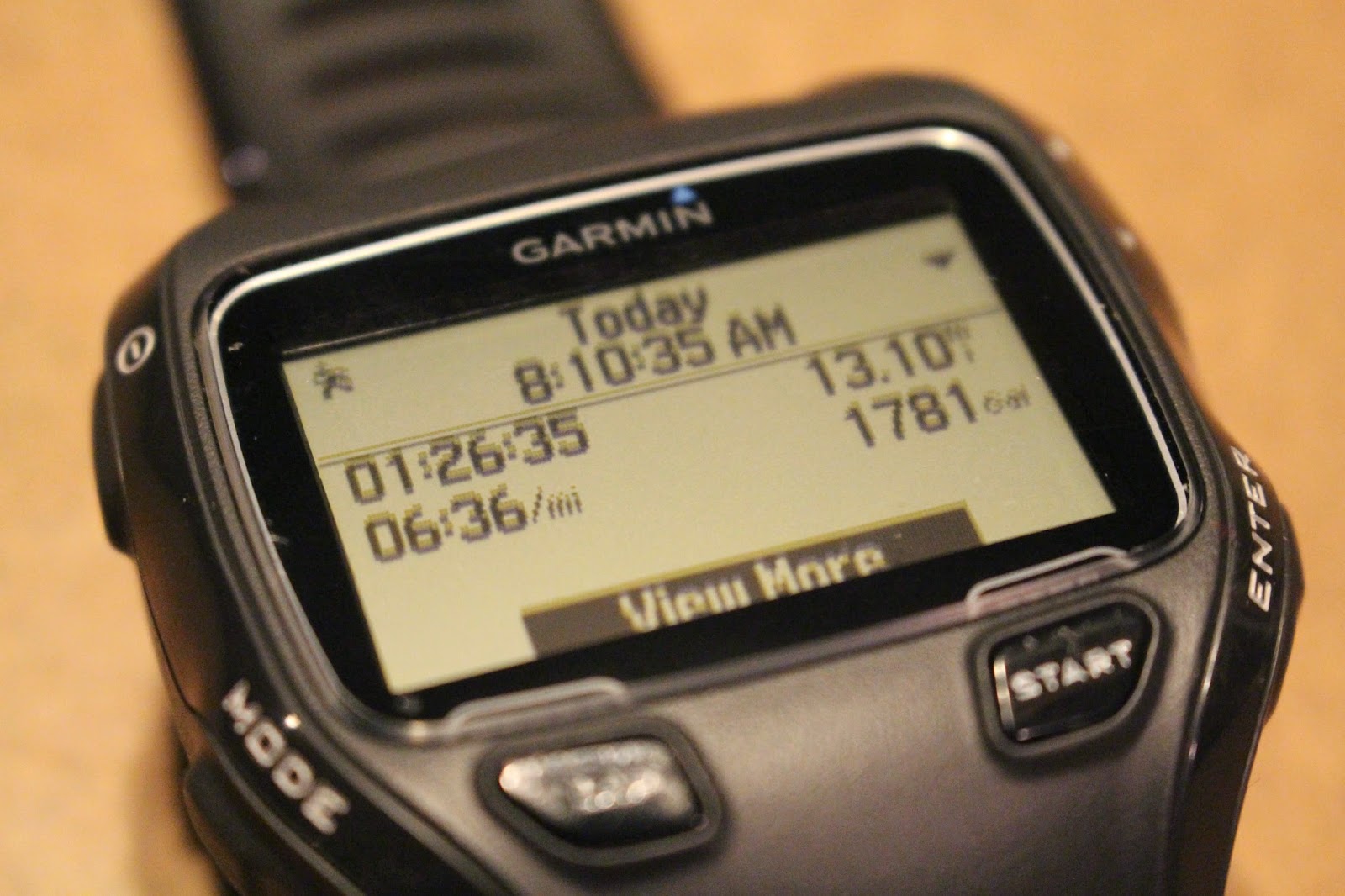 Let me just start this post by saying ... I am not a fraud!!!  Ha.  But I feel like before we get going with the description of the day's events, I should offer an explanation.  After this run, I stated on Facebook that I "Ran my fastest Half-Marathon ever today".  Usually when I post FB stuff about running, like one or two people "LIKE" it.  But after I posted this, I got a ton of "congrats" and "LIKES".  So thank you for that ... but it wasn't really a race ... it was a simulated race!  True, I didn't stop the clock at all and ran 13.1 straight miles in 1:26:35.  But the only proof of the time I have is on my Garmin page.  I really wasn't expecting the kind of response I received, and now I feel a little sheepish.  It would be corny to try toexplain it on FB, so please accept my apologies here if I offended anyone.  But I DID run my fastest 13.1 ever on Saturday!  Here's how ...

If you've read my last few posts, you know it's been a rough week.  I was sick for five days (vomiting for much of four of them) with the worst stomach virus I've ever experienced.  And in addition to missing Christmas with my family, I had to back out of the Run For The Ranch Half-Marathon in Springfield, MO this weekend. Missing the race really sucked because based on last year's results, I felt like I had a shot at finishing in the Top 3 of a race ... which I've never done before.  And I would have definitely had a legitimate shot at being the Overall Masters Winner, based on former finishing times.

I started feeling a little better on Christmas Day and ran three very light miles.  Those seemed to go okay, so I ran six more miles on Friday.  On Saturday, which was supposed to be the day of my race, I felt amazing when woke up.  So I decided to time myself in my own Half-Marathon at home in good ol' Lees Summit, MO since I couldn't be at the actual race.  And what was my faux Half-Marathon result ... 1:26:35 PR!!!  It obviously comes with an asterisk, and I won't list it as my official half-marathon PR since it wasn't in an official race ... but I warmed up and ran it just like a real race, and it was my fastest 13.1 miles ever.  So if you saw the result on Facebook and congratulated me, thank you, and don't feel duped.  It WAS a real race for me, even though there were no other runners.  And my Garmin will testify to my results being legit. 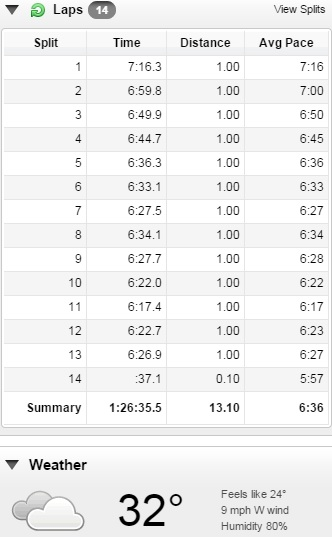 I've felt like I was in shape for a run like this (and maybe even faster) for quite a while.  For most of the Fall I knew I was great shape, but just could never seem to validate it in a race.  My training times have been off the charts compared to previous years, and I felt like I should be down close to 1:25 for this distance.  And frankly, I think I can go sub 1:25 this Spring or early Summer if everything goes right, which would automatically qualify me for the New York City Marathon, which is my goal.

It was cold today.   The weather data on the right indicates 9 mph wind, but it was actually gusting up to 20 mph.  It was a little too cold for shorts, at least for me, but I wore them anyway.  My legs froze and were stiff the whole time.  I also wore a new Mizuno Breath Thermo long-sleeved shirt.  I'll probably do a full review on it later, but the Breath Thermo line is new Japanese engineering with special fabric that traps escaping body heat and moisture, and then uses it to "heat" the fabric.  I know that's really vague, but I'll try to explain it a little more in depth at a later date.

I started the faux race, literally not knowing if I could run 13 miles after losing about 9 pounds of body weight, and most of my fluids over the past week.  I'd been pretty good about rehydrating over the past couple of days, but I'm still lacking some fluids at my core.  After a quick half mile warm up and stretch, I started my Garmin and off I went.  My goal was to run the first three miles around 7:30, but I felt like I was managing the pace fairly well so I pushed it a little.

The thing I remember most about the first half of the run, was how cold it was.  I was running directly due West, into the gusting wind, and my legs were really having trouble staying loose.  At about Mile 5 I was really lamenting not wearing pants, and the thought of pulled muscles started creeping into my mind.  Even though I was treating this like a race, it was really just an up-tempo workout.  There was no need for any more setbacks in my training, so I tried to stay mindful of my tight muscles.  But more than anything, I was simply looking forward to reaching the Kohl's, Lowe's, and Target parking lots at Summit Woods Crossing Shopping Center where I would turn around run with the wind for the second half.

Once I made the turn, life immediately got really good, and it was GAME ON!!!  I was keeping a 6:30'ish pace without too much trouble on such a chilly day, and I just remember thinking to myself, "Wow, my conditioning feels surprisingly good after being sick all week!".  I was breathing fairly well, and I don't remember ever thinking my lungs couldn't handle the pace.  But I was seriously beginning to question how much longer my legs could.

At about Mile 8, I actually thought about shutting it down and jogging home.  My legs were by far and away the worst part of the run on Saturday.  They were dead for most of it, and freezing cold for all of it.  Even though I was sick all week, I obviously had some energy stores somewhere in there, but they just didn't feel normal.  And when I hit Mile 9, I was fighting it a little.

I've ran this course dozens, if not hundreds of times, and I knew that if I could make it just past Mile 9, there was a long gradual slight downhill for about two miles.  So I pressed on and was relieved when I hit the expected decline.  And it must have been exactly what I needed, because my pace began to pick up a little over the next few miles. In fact, Miles 10 and 11 were my fastest of the day.

I was really really happy, but it kind of felt like hitting a hole-in-one when no one was around to verify it (at least I suppose that's what it feels like).  I would have been happier if I'd actually ran it in Springfield, and was now kicking myself a little for not making the 2-1/2 hour drive in spite of being sick all week.  But I looked at the Facebook pictures from the race and it was raining the entire time in Springfield.  After being sick all week, I'm sure I didn't need that.  But based on the posted results, I would have finished 5th Overall with this time, but I would have won the Masters Division.  The Run For The Ranch course is pancake flat ... much flatter than the one I ran on Saturday in Lees Summit.  So who knows, I might have been a little faster in Springfield.  But maybe I ran well in Lees Summit because I'm so familiar with the course.  Whatever the case, I was just "feelin' it" on Saturday, and at the risk of sounding over-confident, I really believe I would have ran well anywhere.

I took a few things from the run today ...
1. It was a hugely encouraging sign to be sick and weak, but still able to run my fastest 13.1 - my marathon conditioning is right where I want it to be
2. Weight matters ... I was lighter than I've been in a while and I'm sure that played a role, now I just need to keep the weight off in a healthy way
3. I'm going to KILL IT IN 2015!!!  I'm more motivated right now than I've been in years!