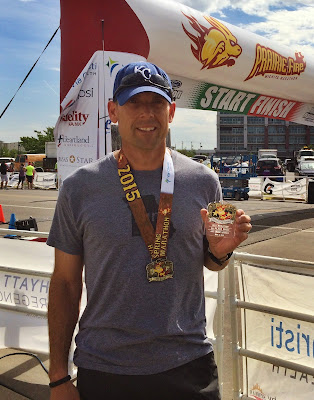 Overview
Have you ever felt like you were running a really good race ... battled through fatigue ... made your way toward the front of the pack ... only to see your time on the clock about two minutes slower than expected as you approached the finish line?  Well that was my race at the 2015 Prairie Fire Spring Half-Marathon.  The finish time was pretty disappointing, but all things considered, a top ten finish in a mid-sized half-marathon was one of my better results, and I was very proud of the way I ran.
The Prairie Fire Marathon and Half-Marathons are a series of races ran in Wichita, KS in the Spring and Fall each year.  I'd ran the Fall Marathon in 2012, but had never ran the Spring Half-Marathon.  So when I was looking for a fast and flat Spring race, Wichita was my logical conclusion.  With a pancake flat winding route adjacent to the Arkansas River, and only 167 ft of total elevation gain, I knew it was my best bet for a good Spring race.

My initial plan for the Spring race was to run a PR.  My current PR is 1:27:52, which I set last Fall in Minnesota, but I've felt for some time it should be in the 1:26 range.  So I began hitting my training fairly hard.  But after the Phoenix Marathon at the end of February, I began experience quite a bit of pain from inflammation in the Bursea Sac in my left hip.  And unfortunately, this Hip Bursitis put a huge dent in my training for this race, limiting not only my training speeds, but also my weekly training mileage.  It became very evident during my training that a PR was most likely out of the picture.  I probably should have shut my training down completely, but I push through it, hoping to still run a solid race at Wichita.

The biggest thing I noticed while running through the injury was my leg turnover just wasn't there.  I routinely struggled to maintain 6:30 paces during my Tempo Runs, which usually required a full day of recovery afterwards.  The drop in training speeds and weekly mileage left my left hip much weaker than normal, and really not ready for a fast race.  But other than the hip, although a little over race weight, I was healthy and ready to give it a shot.

I love Wichita, Kansas.  It's part of my sales territory and I have friends and family that live there.  So a race through the river city feels familiar and friendly.  The expo was held the day before, on Saturday, in conjunction with a Kid's Festival.  Packet Pickup was held downtown at the Century II Building and was quick and seamless.  On race day, parking was a breeze!  I got to the race about an hour early and parked at Lawrence-Dumont Stadium, the former Double-A stadium for the Kansas City Royals.  It was literally across the street from the starting line, only about 400 meters away.

As usual, I kept an eye on the race day weather leading up to the event.  I'd been training in 45-50 degree temps most of the early Spring, but race day in Wichita was supposed to be about 65-70.  However the additional 20 degrees in temperature wasn't what concerned me ... it was the 15-20 mph South wind we would be running in.  And I knew that based on the layout of the course, we'd be running the final three miles right into the teeth of the Kansas gusts.

Miles 1-3
I had really tried to focus on not starting too fast in this race, but I would have to give myself a big fat "FAIL" in this category at Prairie Fire.  At 7:30, the first mile was right where I had planned it, but the next two were a little too fast.  I've just found in races, that if use the first 3-5 miles to catch my breath and loosen up, then the last 3-5 miles are ran with acceleration, and not fatigue.  But even though 6:58 & 6:51 probably seem about right, they were too fast, too early.

We made our way down Maple Street in the early miles where we would circle Friends University, and head back toward downtown.  During Mile 2, I noticed that I was really beginning to sweat.  It was really windy, so it didn't seem exceptionally warm, but it was much warmer than I'd been training in up to this point in Kansas City.  Plus, with rain clouds looming and 68% humidity, the air seemed a little thick.  They weren't what I would call "tough" conditions, but they seemed to be slowing everyone down a little. 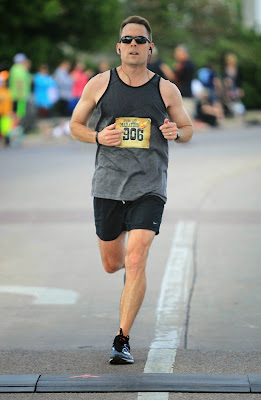 Miles 4-6
I felt like I controlled the mid portion of the race fairly well.  As we ran back through downtown along the Arkansas River, through Riverside and Oak Parks, I stayed at the pre-programmed pace and didn't get too fast.  But even though I was only running at about a 6:40 pace, I seemed to really be struggling with the speed.  I think part of the reason was there was absolutely no decline in elevation ... just flat, flat, flat ... which kept my legs supplying 100% of the energy without the help of a downhill for a breather.  A flat race always sound great in advance, but usually somewhere in the middle, I find myself longing for a change in elevation to change up the muscle fibers being used.  But those same muscle fibers would have to continue firing to the end of the race as there was no hill in sight.

Miles 7-10
Miles 7-10 continue along the Arkansas River, through Cowtown, before circling Sim Park. I grabbed a gel to hold onto from one of the many helpful volunteers during this stretch.  And speaking of volunteers ... they were GREAT ... especially with the traffic control.  They were there at every intersection to point the way and really made the course easy to navigate.

Miles 11-13
In the last three miles of the race, I started doing "finish line math" in my head.  I would have been very disappointed if my time was over 1:30, so I started calculating just how slow I could run and still make that happen.  I figured if I could keep the last three miles close to 7:00, I should finish in time.  But here was the problem ... these last three miles would be ran directly into an 18-mph headwind.  And let me tell you ... it was very unpleasant.  It just took so much energy to keep my legs churning.  Everytime I neared a group of runners, I wanted to stop and walk, because I knew that once I passed them, my pride would keep me running.  I just felt like my legs had nothing left.  The wind made it seem like I was running in place ... but I kept grinding.

I passed Mile 11 with a 6:52, and Mile 12 with a 6:55.  But the last mile down McLean Street really tested me.  As I hit the Mile 12 marker, I noticed that I had added about .14 miles to the course by not running good tangents, so I knew my time might be a little slower than I had hoped.  But I also knew that based on all the runners I'd passed, and the fact that the only runner I could see in front of me was the women's 2nd Place finisher about a half mile up the course, I was pretty close to the front of the pack.  I looked over my shoulder to find out if I could throw it into "cruise control" for the remaining mile ... but of course not.  At that point I noticed a runner bearing down on me about 50 meters back.  So I tried to keep pace.  I've always heard that a runner who looks back over his shoulder is a runner that's in trouble. This was true on Sunday for me.  I was hurting, but I really didn't want to get passed by this guy ... so I kept him in view until we turned onto Maple Street to run over the Arkansas River Bridge for the final 200 meters of the race. I looked back one final time and saw the runner about 25 meters back, and gaining on me.  But at that point I found a pretty strong kick and finished without him passing me. 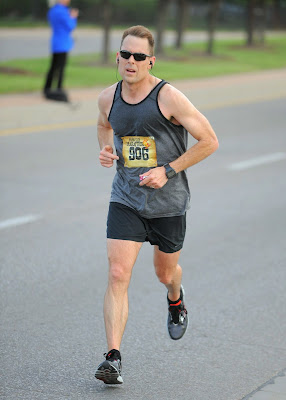 I turned to him at the finish line and said, "Good race, I didn't think I could hold you off!"  He said, "Yeah, great job, I thought I could catch you, but you finished strong!"  I felt really good about the way I battled on Sunday, but when I saw my finish time of 1:29:34, I was really disappointed.  Even though I'd struggled with the hip injury all Spring, I'd really hoped to be in the low 1:28's.  But when I took into consideration the extra .14 I ran during the race, plus the tough headwind we ran into, especially in the final three miles, I figured I would've probably been close to my projected time.

But I was really surprised when I went to look at the final results after the race.  I figured that my 1:29 time in a 1,500 person race would've put me in the top 50.  But when I viewed the final results, I found that I finished 9th overall!  While I was running, I knew I was getting close to the front based on the spacing between runners, but I had no idea I was in the Top 10!  I was elated!  Plus, I won my age group, which was something I really didn't think I would do on Sunday.  As I waited around for the awards ceremony, I visited with several runners who said their times were "WAY DOWN" based on the conditions as well.  At first glance, the weather doesn't seem like it should have been too difficult, but I can tell you the temperature & humidity, and especially the wind slowed everyone's time considerably.  As a comparison, there were about 300 more runners than the previous year at this race, and my time on Sunday would have placed me out of the top 20.

Of course I was happy with the race result on Sunday, but more than anything, I was really please that even though I didn't seem to have my "A Game", I still went out and battled, didn't quit, and fought the wind for a strong finish.  And my perseverance was rewarded with a Top 10 finish in a mid-sized half-marathon.  My hip was a little sore after the race, but hopefully with a little rest, the Prairie Fire Spring Half-Marathon will springboard me into faster races in the Summer and Fall.
... Be Great Today!
Posted by Jim ... 50after40 at 9:30 AM