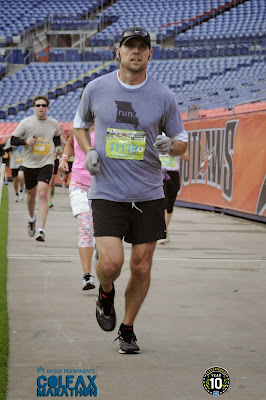 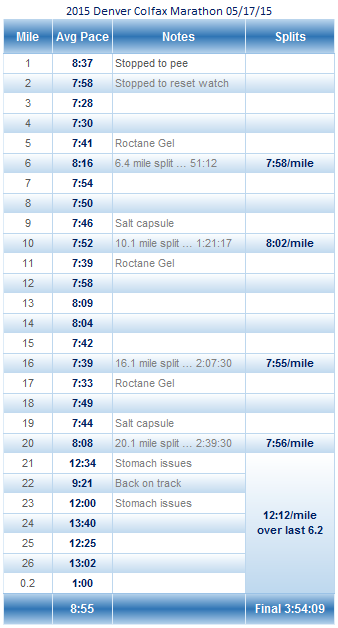 I went into the Denver Colfax Marathon, not in "terrible" shape, but probably the worst marathon distance shape I'd been in, maybe ever.  I just wasn't ready to run a full 26.6 miles, much less at the 5,200 feet of elevation of Denver.  So I knew it would be a struggle, and the only real result I was concerned with was crossing the finish line.

I had a pretty lengthy bout throughout the Spring, after the Phoenix Marathon, with bursitis in my left hip.  The results was a drastic reduction in my mileage leading up to the race.  In the last six weeks before the marathon, the time when I'm usually hitting 75-80 mile weeks consistently,  my mileage was as follows ... 47, 45, 39, 12. 39. 13.  In fairness, two of those weeks were the week before my Spring Half-Marathon, and the other was a taper week.  But the bottom line is, I didn't have a strong enough base to run a good race from start to finish.   But I've ran enough marathons, that I figured I would most likely complete it, but that was about it.

The altitude really didn't have much of a noticeable effect on me at Colfax.  It's been my experience that I really don't start struggling with it until about 6,000-6,500 ft.  I'm sure there was more of a cumulative effect than I realized, but I never remember being "short of breath" at easy paces.

I actually ran the first 20 miles at a 7:56 average pace with a couple of pee breaks, and also walking through every water stop, but at mile 21, I started having stomach issues.  They're something I'm definitely going to focus on this summer during training, as I've experienced them in two out of the last three marathons I've ran.  My legs were actually fine at that point, but I just kept having feelings of nausea, which actually might have been from the elevation.  And as far as my legs go, I have very little soreness in the following days after the marathon, so I was probably in a little better shape than I thought I was. In some marathons, my legs have started aching from about mile 16 on, mainly from over-training during the training cycle.  But in Denver, I actually felt like I could have gone a little further at a 7:45 pace if not for the stomach issues.  These stomach issues at Denver were probably from a weak core, and poor fueling leading up to the race.

When I started feeling the issues about half-way through mile 21, it made me walk most of the remaining mile. I never thought about quitting, it just bummed me out because I knew the remainder of the race would take forever if I had to walk it.  At about mile 22, I started feeling a little better and was able to put a 9:21 in the bank.  But then I started feeling them again decided to walk/run the rest of the race - which was fine, I really didn't care.  I really just wanted to make sure that I felt okay for my 9 hour drive back to Missouri immediately following race.  I figured driving 9 hours while holding back vomit might not be a great thing to experience.  If we had been staying in Denver one more night, I might have pushed it a little, but probably not.  Like I've written before ... if I realize at some point during a race, I'm not going to PR or place in my age group, I have A LOT of "quit" in me.  Ha, and that's what happened at this race.  During mile 22, it just became a game of get to the finish line, get the medal, and get out of here.

Hopefully most of the hip stuff is behind me, because trying to train for a marathon when being only about 50% healthy sucks.  If I can get the hip stuff completely resolved, it should be a fairly fast rest of the year, but we'll see.
... Be Great Today!
Posted by Jim ... 50after40 at 11:58 AM