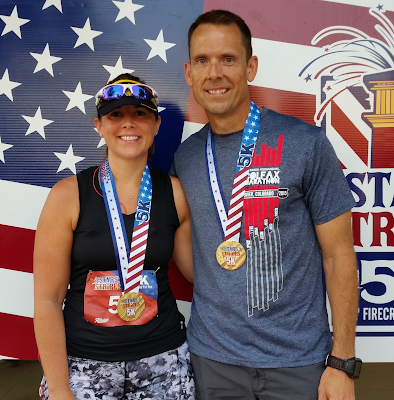 5K races are by far my least favorite.  I've always looked at them as basically a controlled sprint for three miles, which usually leave me feeling beat up and exhausted for a few hours after the race.  But if a "comfortable" 5K is possible, I think I ran one one the 4th of July this year at the 4th Annual Stars & Stripes 5K in our hometown of Lee's Summit.

Michael and I chose this race a few years ago for the simple fact that it's in our hometown.  Since it's literally ran through an outdoor shopping mall, it's not really glamorous, but it's only a few miles from our front door, which makes it very convenient.  Plus, it gives us a chance from time to time to run it with local friends.  This year, our friend's Kelly and Jason were there.  Kelly ran the race, and their son Luke ran the Lil' Fire Cracker Kids Run afterwards.

Packet pick-up was held the day before at one of the local running stores in town, and the sponsor of the race, KC Running Company.  As I've written before, they do an absolutely great job with race organization and management.  We are lucky to have them.  Runners got to choose from red, white, or blue cotton race shirts, and as a bonus, we also got free race pictures again this year.  I picked out a red shirt, and Michael went with blue.

I knew going into this race that it wouldn't be one of my fastest.  I was in decent shape, but not anywhere near my best, so I was looking forward to using the run as a benchmark for my summer training.  But even though I wasn't in top shape, I still felt a little self imposed pressure to win my age group again for the fourth straight year at this event.  Since the race started in 2012, no one in my age group had ever ran faster than me.  Of course, that always has a lot to do with luck and who is, or more importantly isn't, at the race.  But regardless, I was hoping to keep the age group winning streak alive.

For some reason, my stomach was a little uneasy before the run.  I didn't necessarily feel nervous, but I was probably a little more anxious than I was aware of.  But as I went through my typical 5K warm up, it didn't seem to bother me.  I ran around the backside of the shopping center by JC Penny and Macy's, and then ended with a few strides in front of the starting line.

My plan for the race was to go out as comfortable as possible, and then pick it up from there.  If comfortable was a 6:30 ... fine.  If it was a little faster ... that was fine too.  I really just wanted to ease into my fast pace, without feeling like I was going to die right off the bat.  I knew this approach would probably cost me a few seconds, but I wasn't PR ready, so it seemed to make the most sense.  But also with this plan, I honestly had no idea what my time would be.  I told my friend Paul, that I wouldn't necessarily be surprised with something under 19 minutes, or something close to 20 minutes.

The race started, and of course I spent the first half mile navigating through the overly ambitious runners who bunched up toward the front of the starting chute, only to quickly realized they were out over their ski's a bit.  There's always a handful of racers who think they can keep pace with the elite runners way up ahead of me, but their churning guts and suddenly wobbly legs confirm that they're still mortal, ha.  At the half-mile mark I felt really good.  I was only pacing at about a 6:20, but it felt very relaxed without any trouble, so I picked it up a little.  I really felt pretty good, like I had a lot more to give, but I didn't want to press too early.   I hit the first mile marker with a very relaxed 6:13.

Mile two features the only incline of any sort in the race.  It's a short hill on the backside of the University of Central Missouri building, and it's only about a quarter mile long.  It's nothing unmanageable at all, but at 5K pace, any hill always breaks my stride a little.  Fully aware of the slight incline, my plan was to back off during the second mile, and then speed up a little down the home stretch.  I began passing a few more runners during this back-stretch, but there were still several runners ahead of me.  I kept checking my Garmin to make sure I controlled the pace, and mile two checked in at 6:18.  And I was amazed at how good I still felt.

Usually by the third mile of a 5K, I feel like I'm gonna die.  I've often asked God for forgiveness of my sins and to "comfort and protect my family", just in case I keel over while running ... I'm not joking.  But on Saturday, I really felt pretty good.  Don't get me wrong ... since I was running close to 6:00/mile, it obviously wasn't a picnic, but I don't remember feeling that relaxed and comfortable in a 5K, well, maybe ever.  And I was beginning to pick up a little speed and pass a few more runners.

As we came down the back stretch with about a half-mile to go, I passed a group of three runners, a college-aged kid, and two guys who looked about 40.  I glanced at one of the 40-year olds in an orange shirt who really seemed to laboring, and said, "Come on, we got this!"  And after I passed two more 40'ish guys, we all made the final turn for the last two hundred meter sprint to the finish.  Just about that time, my Garmin vibrated and I glanced down.  My third mile was 6:11, which actually seemed a little slower than I was running.

I really began picking it up with a good final kick, and looked over at the reflection from one of the storefront windows we were passing to find out if there was anyone behind me.  And what do you know, the guy in the orange shirt, who only about a minute ago looked like he was fading, was gaining one me.  But since I'd ran such a controlled race, I had plenty of gas left, found another gear, and left him behind.  I ran the last tenth of a mile at a 4:50 pace, and ended up with a 19:00 flat ... and only two tenths away from being under 19 minutes.  And while I was really pleased with the run, I wish I'd hurried just a little more to push the time under 19.

I ended up 23rd out of about 900 runners overall, but didn't win my age group division for the first time at this race, coming in second.  Even though I wasn't in great shape, and I hadn't ran my fastest, I was pretty bummed about it.  But I was reminded why it takes a little luck to keep such a streak going when I learned the winner of our division ran a 17:05!  There was no way I could ever beat  him, so I didn't feel as bad after that, ha.  Later that day, we went to see a movie, and then spent time with the family.  We watched Ryder and his dad shoot off fireworks for a while, and spent time with little Rawlee.  I'm not a big fireworks guy ... which obviously makes me "un-American", but it was awesome watching Ryder have such a great time with it.

As I sat there later that night, a little annoyed by the exploding celebrations of freedom throughout the neighborhood, breathing in cherry bomb and bottle rocket toxins, and watching money literally go up in smoke ... I thought about the race.  I think if I'd pushed just a little more, I could have probably been around 18:45, and honestly regretted not being under 19 when I was perfectly capable.  But all in all, it was actually a little faster than I thought I'd run, and it was a nice springboard into Fall marathon training.  But most importantly Michael and I had a blast just being together, as we always do.  And it was a great way to relax, celebrate the holiday, and be thankful to live in such a great country when about all I had to worry about on Saturday is how fast I ran a dumb race.  We are truly blessed.
... Be Great Today!
Posted by Jim ... 50after40 at 3:14 PM