On most given days, if you ran up to me, shouted "America!", and then pulled my shirt up and exposed my bare chest, there'd be a little surprise waiting for you.  No believe me, it's not a perfectly carved pectoral set, or tattoos, or chest hair manicured into the shape of Sponge Bob ... nope, none of that.  What is it, you ask?  Well, it would be two missing nipples.  Actually, they're there, but on most days they're hidden underneath two small circular band-aids.  Which leads me to my question for you today ... do nipples need air?

This  might seem like a silly question, but it's one I've been pondering for a while.  You see, in the past to avoid painful friction during a run, I used Body Glide everyday on my nipples.  But that stained pretty much every running shirt that I had, resulting in two large discolored circles on my chest, resembling giant areolas.  So for the past six months or so, I've been using Band-Aid brand Clear Spots.  They're about the size of my nipples, waterproof, and seem to adhere really well.  And even though a box of 50 is only like $3 at Walgreen's, they're too expensive to use a new one everyday.  So typically I'll just leave them on for two or three days before changing them.  Genius ... right?  I mean, I usually wear a shirt in public, so who would really know except for my wife.  And on the rare occasion I'm forced into the dreaded outing at our neighborhood pool, I just take them off so my nipples blend in with everyone else. 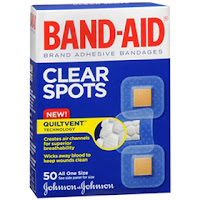 But here's the issue,  since I basically leave my nipples bandaged all day everyday, they never get any air.  When I finally remove the Band-Aids, on an off day from running for example, the poor little guys looks wrinkled, and pale, and sick.  Like two of those weird white raisins you sometimes have to settle for when the store is out of regular raisins and they're not getting any in until Wednesday.  I really worry about them.  I've been doing this for a while now and there don't seem to be any adverse effects, but I just thought I'd throw it out there for discussion.

So what do you think?  Do nipples need air?  Should I change out the Band-Aids after every run?  What type of nipple protection do you use?  I assume most women just use their bra's because they don't seem to rub like the loose shirt of a guy, but who knows.  Well, that's about tit. (haha ... pun)
... Be Great Today!
Posted by Jim ... 50after40 at 7:13 PM