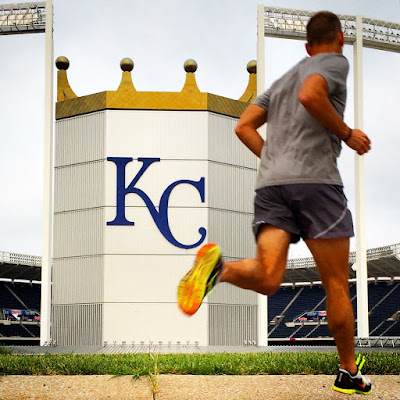 The Kansas City Royals 5K provided a mixed bag of emotions for me on Saturday.  Of course Michael and I had a great time combining two of the things we love most in this world ... running and the Royals!  And while I was really confused and disappointed with my finishing time, it was one of my highest overall finishes ever in a race ... so good job ... I think???

I'm in the bulk of marathon training right now at about 75 miles/week.  Plus, I'm trying to carry a little more upper body muscle than normal, which has added about five pounds of weight.  So I knew my time in Saturday's 5K wouldn't a be a record breaker, but I estimated that I would be around 18:45-18:50 for the race.  I ran 19:00 on the fourth of July, and really wasn't in as good of shape as I am now, so I was hoping for a good day.

The Royals 5K is one of our favorites, because even as season ticket holders, the closest view we ever get of the field is from our seats.  But during the last mile of the race, runners get to run on the field of Kauffman Stadium ... yeah, the actual field where the 2014 World Series was played ... AWESOME!!!  It's like an all-access pass to one of our favorite places.

The run didn't start until 8:00 a.m. CST, which seemed a little late for a late August race in Kansas City.  Fortunately, we caught a little break on the weather as the clouds kept the temperature at 73F, but the humidity was high as always at 83%.  Pretty muggy!  But when you live in the Midwest, you know that any race from April-September has the potential to be hot and humid, so you just adapt.

Frankly, I hate 5K's.  It seems like nothing more than a controlled sprint for 3 miles that leaves me feeling like crud the rest of the day.  So like the last race on Independence Day, I decided to back off the gas a little, especially at the start, and actually try to enjoy the run a little.  And during the first mile, as we circle the adjacent professional sports complex on the other side of the parking lot, Arrowhead Stadium - home of the Kansas City Chiefs, I felt like I was cruising at a manageable speed.  I checked in at the end of Mile 1 at an acceptable 6:12 ... pretty much right where I wanted to be.

The second mile is where I started to become confused.  I had intentionally picked up the pace a little since the first mile felt so good.  In the early stages of Mile 2, I kept checking my Garmin and my pace was consistently below 6:00 at around 5:53.  But then we started a slow mild incline for about 3/4 mile.  The climb was only about 50 feet, but apparently it slowed me down more than I realized.  I passed two or three runners during this stretch, and could still see the leader, but when I hit the marker at Mile 2, my watch read 6:13!  What the heck???  I was certain, even with the light hill, that I would be close to 6:00.  I was literally dumbfounded and thought to myself there was no way it could be right.  It was quite a distraction, but I kept on.

I knew I needed to pick it up a little and began to grind during the final mile.  I passed a few more runners, and was creeping up on one of Michael's co-workers, Pat, who is an elite Masters Runner.  I was literally only about 30 yards from him.  Up until that point, I really felt like I was running a pretty strong race.  I was in about 9th or 10th place out of a fairly large field of 2,200 runners (and a lot of walkers), and I was gaining on an elite athlete who usually runs in the low 17's for 5K's ... but my time was nowhere near where I thought it should be.

As you enter Kauffman Stadium toward the end of the last mile, you run down a ramp that's sloped at about a 20 degree angle ... it was really steep.  I've ran this race several times before and was ready for it, as the decline can really throw your pace off.  It's about 100 yards long or so under the stadium seats, and then you enter the field through the opposing team's bullpen in right field.  After that, you run counterclockwise around the outfield warning track, take a left at the foul line and run toward home plate, then take another left and run toward first base and back to the visiting team's bullpen to complete a giant loop on the stadium floor ... where they actually play the games.   I'm the world's biggest baseball and Kansas City Royals fan, so I really geek-out during this stretch of the race.  The only downside is that it's over too soon.

The other downside is that this year, unlike previous races, the finish line was outside the stadium where the race began.  Which meant we had to climb the hill under the stadium that we'd just ran down.  Right before I hit the incline, my Garmin vibrated for Mile 3.  I looked down and it read 6:09.  I'd picked up my pace a little and thought that with a strong finish I could still come in under 19:00.  But as I started climbing the slope that lead out of the stadium, my legs just really slowed. It was like someone had put several flights of stairs immediately before the finish line.  When I reached the top, I was huffing and puffing and almost bent over, but I tried to create a little turnover for the final .1 mile.  But as I crossed the finish line, only about 50 yards from Pat, my Garmin read 19:11 ... and I was pretty pissed!

After I caught my breath, I caught up with Pat and two other elite Master's Runners and asked them how their races went.  They all said they were really slow on Saturday, about a minute or more off their normal times, which made me feel better.  Plus, when I started looking at my splits 6:12, 6:13, and 6:09 ... I noticed that it took me 47 seconds to run the final .1 miles.  Typically this final home stretch takes me about 25-30 seconds.  The climb out of the stadium had really slowed me down.  If not for the little "staircase" out of Kauffman, I would have probably come in around 18:50-18:55, which I could have lived with, but I was really unhappy with my time on Saturday.

But after that, I went and checked out the results and found out that I'd finished 10th overall, and won my Age Group category.  I felt much better about the slow time after seeing the placing.  My conclusion was that the conditions must have slowed me more than I realized.  Plus, I know the final climb probably added 20 seconds or so to the total.  I don't think I'm in PR shape right now, but I was certainly hoping for better than 19:11.

Michael listened to me whine and complain about my time all the way home, but honestly, I probably ran better than the time indicated on Saturday. In cooler conditions, without the obstacle at the end, I think I could have managed an 18:30 ... but who knows, maybe this old man just isn't as fast as he used to be.
... Be Great Today!
Posted by Jim ... 50after40 at 7:26 PM